8:07 am - Wednesday - I know, right?  Why am I up so early?  I have no adequate answer except I just am.  The temperatures cooled off dramatically overnight.  For the first time in over a month the inside temperature got down to 64 F.....it has been hovering, overnight, around 70 for that same period of time.

Traffic driving through Stateline was obnoxious to say the least....usually we can leave TVC and be in Carson City in 40 minutes tops, but it took close to an hour due to the heavy Stateline traffic.  We stopped in at El Charro Avitia (Mexican) for lunch.....we have been going there for years when we are in the area, and unfortunately, for me, the food was just not up to par.  Nevertheless, we had a nice time chatting and relaxing until I gave my bank card to the waitress to pay the bill.....she came back saying the card had been declined........ 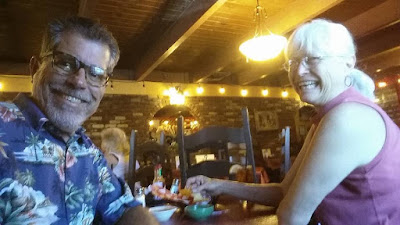 ......if you have been reading our blog for a while you know this happens at least once, or twice a year as we travel all the time.  Every once and a while the bank's software decides I am not where I am supposed to be and believes fraud is occurring thereby blocking my card.  I have to call their automated fraud line and verify it was, indeed, me using the card and that the charge was, indeed, mine.  After clearing the card I got back on the phone and called to talk directly to a customer service person to make sure it would not happen with TLE's card.....that took around 30 minutes of my life that I will never recover.  Apparently they now have the ability to add a 'travel code' to my account advising the computer we are in South Lake Tahoe until a time specific so this won't happen again until we begin to move again, then we'll have to get back on the phone and give them our new itinerary.....uggggh!

The rest of our shopping went fine with no more bank card issues.....we made our usual stops at Trader Joe's, Walmart and COSTCO....they are all within two blocks of each other so it is very handy.  We were back home by 4:30....again the traffic through Stateline was mind numbing.

The high in Carson City was 97, while the high in SLT was 82, but it was still feeling warm inside the coach when we returned so we turned on the AC for a couple of hours before opening up the windows and going outside for cocktail hour about 6:30, which evolved into a fireside chat.  The evening was delightful and we managed to burn a few logs from our enormous firewood collection..... 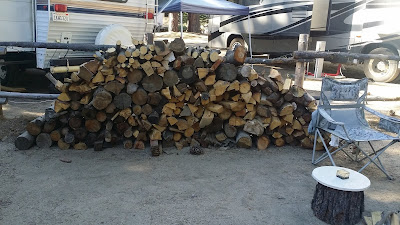 .....mind you, we have not purchased one stick of firewood this summer.....I just pick up what campers leave behind.  I keep telling myself to stop picking up the wood as I don't think we have a prayer of burning what we already have collected, but I have a problem....I just can't leave free firewood sitting there.

We headed inside just after 9 pm where we watched a recorded episode of "So You Think You Can Dance", then were in bed before midnight.

Thanks for stopping by!
Posted by Whatsnewell at 10:04 AM