Heart of an Awl

Our sleep Thursday night could not have been better....the fairgrounds were quiet and dark at night, and we slept like the dead.  I was up around 6:30am and promptly turned on the big generator to make the coffee and to run the block heater.  The night temps got down into the mid 30's and I knew the DD would need a "warm blanket" to come to life again this morning.


We had promised the ground keeper that we would be out of the fairgrounds before 8am on Friday, and we were true to our word as we passed through the entry gate at 7:40am.....we decided to drive over to the local Lowe's about 2 miles away and park there for a couple of hours while we had breakfast, and I wrote yesterday's blog entry.  The great thing about Lowe's that we discovered quite by accident in San Antonio is that they all have FREE "Guest WiFi", and it is very fast!  As we have traveled across the US we have frequently used their WiFi, and today was no exception....the signal was good, and fast!  While I wrote the blog, Elaine made me some hot oatmeal for breakfast.  I have liked oatmeal since I was a little kid.


Our second issue of the morning was to find an RV dump site to dump our black tank before we arrived at our friend's home in Coeur d'Alene, ID.......in case you have not guessed, the title of today's blog is the definition of the French phrase Coeur d'Alene.  This name was given to the local indigenous Indians by the French traders "referring to the perceived shrewdness of the trading skills exhibited by the tribe" (definition taken from a Wikipedia article on Coeur d'Alene).  Elaine has a Flying "J" directory she refers to often to find dump sites, and found one just 5 miles west on I-90 at exit 96.  Normally Flying "J's" charge to use their dump station, but this Flying "J" does not!  So we were able to dump for free for a change!


We were back on the road by 10:30am headed west to our destination.  The drive was very pleasant, but we had a couple of big passes to go over....Lookout Pass and Fourth of July Pass, but the DD (Detroit Diesel) was up to the challenge and we chugged over both passes in style, although down in the 30mph range.  Both passes were at the maximum of 6% allowed on the Interstate system, which meant I had to gear down to 2nd gear a couple of times to maintain our forward momentum. 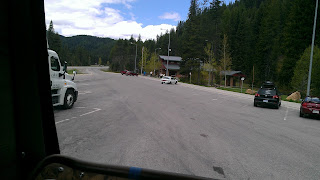 We arrived at our friend's home around (what we thought was) 2:30pm, but we found out quickly we had gained back the last hour we had lost months ago as we moved eastward.  We are now back in Pacific Daylight Time!    Before we drove the coach into a neighborhood with which we were unfamiliar, we decided to unload the T'bird at the local Lowe's about 2 miles from our friends home, and drive over to inspect the streets, driveway, etc.  I'm glad we did, because I wasn't sure we would fit.  As it turns out, we were able to park the coach and trailer in their driveway next to each other. 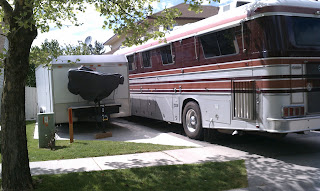 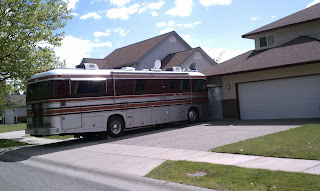 Parking the trailer was a little tricky, but, fortunately our friends have a Chevy Tahoe with a receiver hitch, so I hooked up their Tahoe and carefully backed the trailer into the side yard of their property and then pulled the coach in......fits perfectly!

We went inside and spent some time talking, and catching up and decided at some point that we would go out to dinner at a local Italian place called Tito's Italian Grill.  It is down on the shores of Lake Coeur d'Alene, and was a great choice for dinner.  After dinner we walked around the floating boardwalk that circumnavigates the entire marina.  It is about .7 miles long, and is reputed to be the longest floating boardwalk anywhere.  Whether it is, or not, it is spectacular.  We viewed a number of wooden boats, which to me were more like floating furniture than boats. 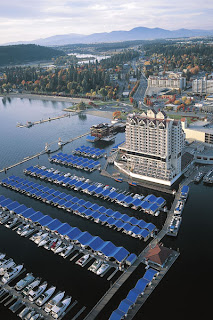 Stock picture of the Resort at Coeur d'Alene where we had dinner...spectacular!

We returned to George and Brenda's home and sat outside by the outdoor fireplace talking and catching up even more.  A great ending to a great travel day!

Thanks for stopping by!
Posted by Whatsnewell at 8:37 AM