Forty-one years ago on this date I said "I do", and, thankfully, so did my wonderful wife Elaine.  We honeymooned at Lake Tahoe, and began our life of "until death do us part".  It never occurred to me that we would not be together the rest of our lives.  I was blessed to marry a woman who first was a good friend, and then gave me time to grow up (we were married just shy of our 22nd birthdays) and gets me, as they say.  Over that 41 years TLE gave birth to our 5 children....Chris, Meredith, Kate, Sharon and Tim who have blessed us with 4 grandchildren to date.  It has been a good life....has it been perfect......no, but has it been a wonderful 41 year trip....you better believe it.  Not everyone gets to marry their soul mate on the first try....sometimes it takes a few tries.

We began our 41st anniversary with a 4 mile walk around Rock Creek Park.  I cannot adequately tell you what a cool place this park is, and how close it is to views like the above.  Afterwards I installed the new spoke on the tandem, and trued the wheel again, and then worked on a brake adjustment.  Next I worked on straightening out the trailer fender that got bent badly in the wheel mishap the other day.

We decided to celebrate our anniversary with a movie, and cocktails/appetizers, in that order.  We went to see the remake of Total Recall (first one starred "Arnold") which starred Colin Farrell and Jessica Biel.....I know there was another female star, but Jessica Biel is all that matters.  This movie grabs you at the outset and really does not let go until the very end.  The story was changed a little, and, frankly, we both liked it better than the original.

Afterwards we drove a mile, or so over to Canyon Crest Restaurant, which is right on the edge of the canyon over looking the spectacular Snake River gorge.  We sat out on the deck and enjoyed a few Samuel Adams Summer Ale's, and some appetizers just enjoying each other and the view. 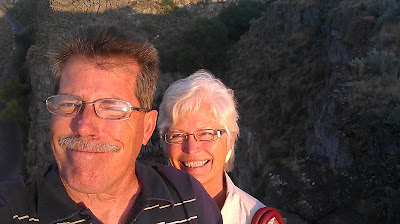 Centennial Falls is close enough to throw a rock at.....I didn't, but you get the idea. 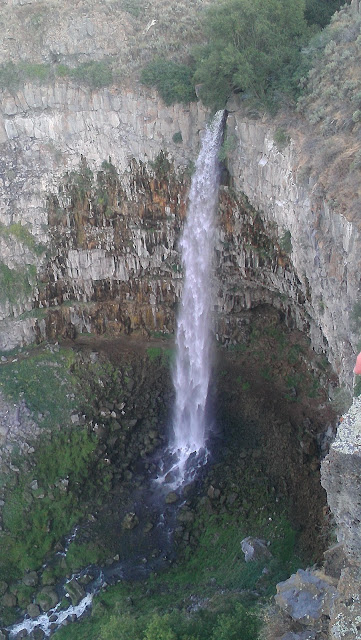 The view from this restaurant is just what a 41st anniversary required, and we ate it up along with the Sliders and deep fried green beans....YUM! 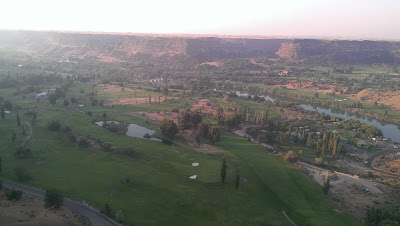 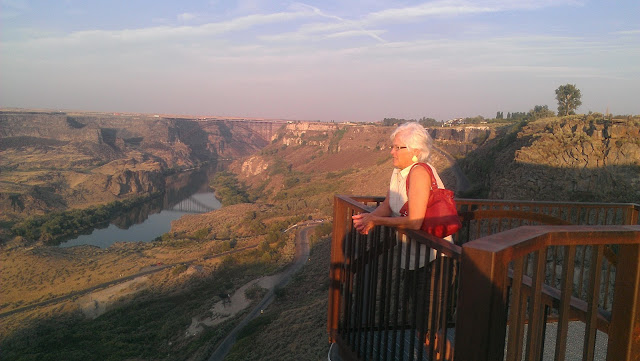 There is a bike path that wanders by the restaurant, and we walked down there after our appetizers and beer and took some more pix. 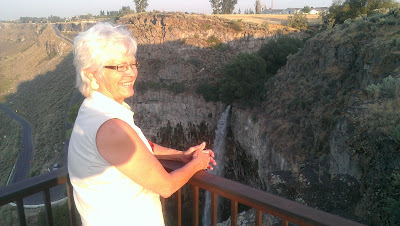 And then drove down into the canyon to Centennial Park for some more pictures from a different perspective.  The bridge is HWY 93 which brings you south from I-84 to Twin Falls.  There are several other waterfalls in the area, and we will run over and take a look at Shoshone Falls tomorrow, and I think there are a few bike rides in the next few days now that it has cooled off sufficiently. 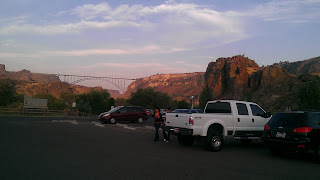 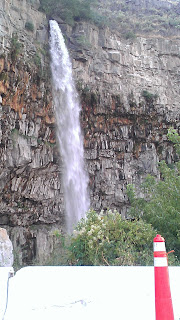 Taken from the road down into the canyon

It has been a great day of celebration, and remembering, and the temp dropping to 81 .....16 degrees lower than yesterday....never turned on the A/C today.  We have decided to stay here through the Labor Day Weekend....no point in heading out on the road tomorrow trying to get a spot on the last long weekend of the summer.  Rock Creek is already beginning to fill up and it's only Wednesday.  Should be rockin' by Friday!

Thank you for stopping by!

Posted by Whatsnewell at 8:20 PM