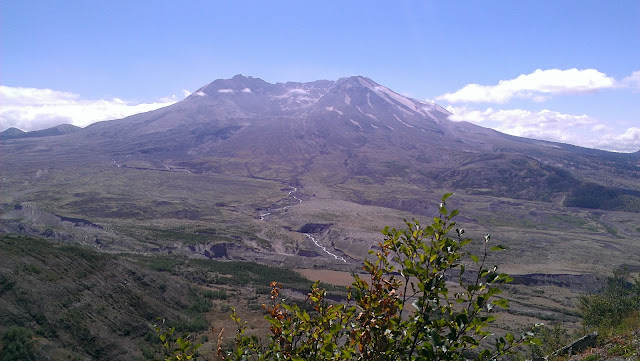 Mount Saint Helens in all her majesty....just before the clouds obscured her crater.

Today was the day we made a break for Mt. St. Helens while the cloud cover was only described as "partly".  Since Saturday there has been a heavy cloud cover each day, but today it dawned partly cloudy, and, as you can see from the picture above we captured at least one picture of the mountain with no clouds obscuring the crater.

We managed to get under way around 9:30am....a pretty early start for us lately.  After fueling up at Costco....$4.05 for 92 octane....up 10 cents since Friday.....we headed north on I-5 to HWY 504 and then east to the mountain.  There are actually 4 visitors centers along this route....the first is run by the State Parks people (Silver Lake Vistors Center), the second is a privately owned operation (Hoffstadt Bluffs Visitor Center) offering 30 minute helicopter rides to and from the volcano for $99/person.....longer rides can be purchased for substantially more.  They also have a nice on site restaurant with a great view of the Toutle River Valley right up to Mt. St. Helens.  The 3rd is The Forest Learning Center, owned and operated by Weyerhauser, and the king of the hill, number 4, is Johnston Ridge Observatory (elevation - 4,200'), and is run by the National Park Service.  The pictures taken by us were at Johnston Ridge which looks directly into the north face of the volcano.  There is a great 15 minute film that is shown every 25 minutes, or so, and is very good, and there is also a very well done interpretive center.  The facility is state of the art.  In addition there are a number of day hikes....the longest takes about 4 hours (2 hours out and 2 hours back).  The Silver Lake Visitors Center does cost, whether, or not you are a senior citizen....we chose not to pay.  The Forest Learning Center and Hoffstadt Bluffs are free, unless you take the helicopter ride.  The National Park center does cost $8 per person unless you have the coveted Senior Discount Pass....which we do....another $16 saved....we have probably saved close to $100 on entrance and camping fees since we got those passes in February.

Below is a file picture of what St. Helens looked like before 1980....very symmetrical.  57 people were killed after the eruption, which knocked down whole forests for up to 17 miles away with the initial blast.  Is has been 32 years since the May, 1980 eruption, and the area within 8 miles of the volcano is still pretty barren.  Plant and animal life began returning very quickly, but the old growth trees that were knocked flat will not reappear for generations.  Trees are growing, and eventually the surrounding area will once again be heavily forested, but that will not be in our life time.  The areas further away, outside the National Park boundaries, owned by Weyerhauser, were replanted in the mid 80's, and look pretty good, but the National Park area is being allowed to return on its own, naturally.

The every Lovely Elaine - the clouds are rolling in 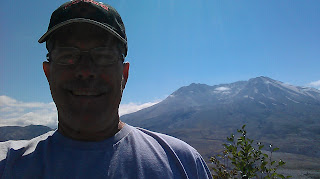 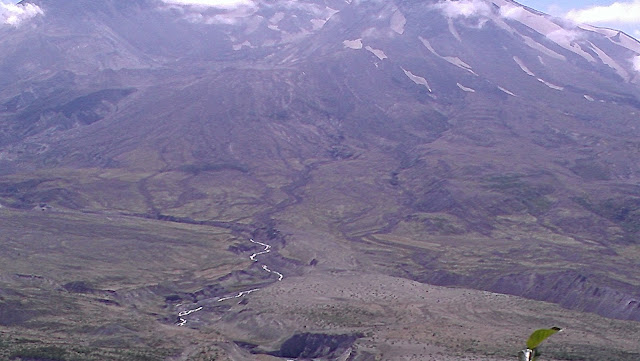 The evidence of the destruction just below the crater is still there 32 years later.....pretty barren still.

We hung around the Johnston Ridge Observatory for about an hour and a half, and then began our drive back to Hoffstadt Bluffs where we planned to have a late lunch.  We got there around 2:15pm, and had a nice, leisurely lunch on their deck.  The micro brews featured at Hoffstadt are from Dick's Brewing Company out of Centralia, WA.  I had Dick's Lava Rock Porter @ 6.5% by volume....probably one of the best Porters I have had.....and, believe me, I have had a few Porters over the years!  They only served beer by the bottle, so I can only imagine what a draft would have tasted like.

We arrived back "home" around 5pm, and found that our replacement coffee maker (Starbucks Barista Aroma) had arrived via USPS!  Yea!!!!!  I'm so glad I had that one in reserve.  Should have the replacement converter/charger in tomorrow.   And I hope those LED lights I purchased 10 days ago show up in the next day, or so.

Tomorrow, Wednesday, we'll pull out the tandem and ride down to Fort Vancouver for the day.....it was closed on Sunday, so we'll take the grand tour of the fort, including the Pearson Air Museum.

That's another day in the life in the books.....thanks for stopping by!