Our Jello plan had been to remain in Grants, NM until Saturday morning, but as things would have it the wind was almost nonexistent when we got up Friday morning.  We debated about whether to move on eastward, or not.  When the winds came back they were much more moderate than the day before, and they were coming directly from the west, which meant we would have a following wind.  In addition to that my coolant temperatures had been running about 5-10 degrees higher than normal and I was convinced that my rear facing radiator needed cleaning.  I got on the phone and checked for some truck places in Albuquerque that offered radiator cleaning services and found one called '2nd to None Fleet Services'.  Yelp gives them 4 stars on 5 reviews, and we would have to agree. I made an appointment and within a few minutes we were back on the road being pushed eastward by the light winds.

It was only 77 miles to Albuquerque and we were there a little after 11 am, and in their wash bay a few minutes later...... 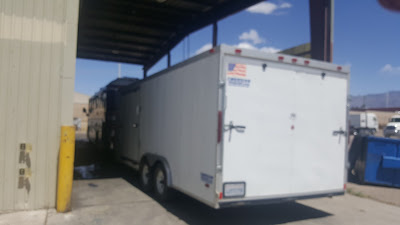 ......while I supervised the cleaning of the radiator TLE spent time on her phone looking for a place to spend the night, and found a Walmart about 26 miles further down the road in a little town called Edgewood at about 6,700' elevation (the reason for the cold temps this morning).  John finished cleaning the radiator around 12:45, and we were back on the road to Edgewood shortly thereafter. 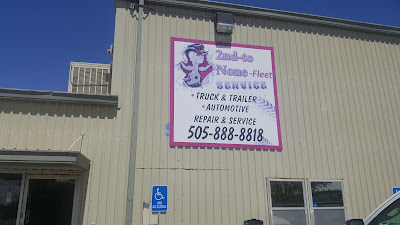 When you  are traveling east on I-40 out of Albuquerque you must climb from 5,400' elevation to over 7,100' before you slip down the grade into Edgewood.  This would be a good test to see how clean the radiator got, and she passed with flying colors.  Before the radiator cleaning the temps on climbs were hitting 208-210º.  After the cleaning they settled in at 198º, which is where they have traditionally been.

We arrived at the Walmart around 1:30 pm having covered just 108 miles for the day, found a spot to park out on the edge of the parking lot, and then went inside.  As we walked across the parking lot we would feel the winds picking up again, and were quite glad we were finished driving for the day.  We were both hungry and decided to get some food from their Deli.  We bought a pound of Orange Chicken for $5.50.  TLE noted they had a nail salon, and told me she wanted to get her toenails done so after escorting me back to the Newell where we ate lunch she headed back inside for a pedicure.  The Orange Chicken was delicious.....only $5.50 and it fed two easily.....great deal!

Once we get into the dry camping mode as we travel day after day I really almost prefer it to staying in RV parks.  When we stop in an RV park I have to go outside to plug in, and almost always connect the water.  That is just more stuff to put away in the morning, and folding up a cold water hose is no fun.   We like overnighting at Walmarts primarily because when we travel every day we tend to shop daily buying more fresh food to eat that day.

Time get get ready to roll our wheels once again ever eastward.  Today, Saturday, we should pass 1,000 miles traveled on our trip to Maine, and we should be in Texas by this afternoon.....thanks for stopping by!


When you shop Amazon, please use our link (below) to access their website.......we will appreciate every purchase you make using our Amazon Affiliate link, and  remember, using our link will not add one penny to your purchase, plus we will receive a small commission which helps defer the costs of producing this blog each day.
Posted by Whatsnewell at 6:51 AM