For the past week we have had a heavy marine layer each morning which has been burning off by late morning, or early afternoon.  It is perfect bicycle riding weather.  I haven't gotten out riding as often as I would have liked, but that being said I have managed to put about 54 miles on my bike, as of Thursday, since we arrived almost two weeks ago now.

I woke up to 'Live at the Masters' on the golf channel, and had the TV tuned to 'The Masters' all day long until the final golfer finished the 18th around 4 pm.   Watching 4 days of The Masters each year is one of the highlights of each year for me.  For the uninitiated 'The Masters' is played at the same golf course, Augusta National, every year for the past 80+ years.  It was built by Bobby Jones, the greatest amateur player of all time.   Since it is at the same course every year one who watches every year can become quite familiar with every single hole, and that is me.  I've never stepped foot on Augusta National, but I feel like I have.

Just before 11 am I headed out on another bicycle ride.  I rarely know how far I am going to ride, and Thursday was no different.  I just start riding and make up my mind at some point to turn around and ride home.  Sometimes the distance is 10+ miles, which is pretty much the shortest ride I will do, or some times I go for it and ride 20+ miles....often it is somewhere in between the two.

I started out picking up the Pacific Electric bike path at Maple and riding east to its terminus at Cactus (about 1.5 miles) and then turning around and riding back west until I decided to turn around just past Day Creek in Rancho Cucamonga........ 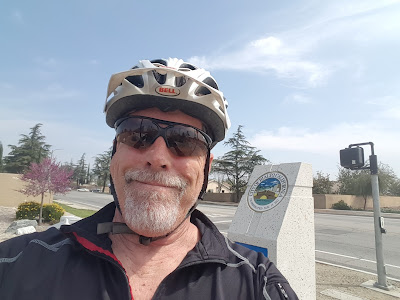 The eastern terminus of the Pacific Electric bike path 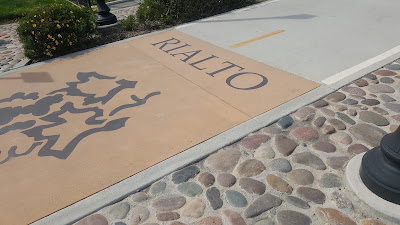 .....at the turn around point I had covered about 11.5 miles and felt much better than my first ride into Rancho Cucamonga about 6 days prior.  By the time I arrived back at the Elks Lodge in Fontana I had covered 21.8 miles, averaging 14.1 mph in one hour and 32 minutes of riding while consuming some 1,257 calories....... 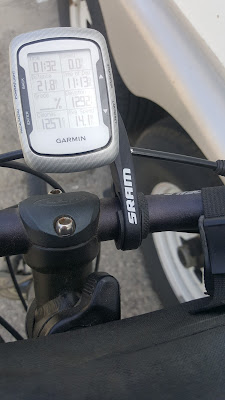 ......by the time I had returned sometime after 11 am the marine layer had burned off and it was beginning to get warm.  While I was gone TLE went out to run a few errands, which meant I would not see her for a couple of hours at least.

Just before TLE returned from her errands Ruben Miranda of Kool Filtration (Alta Loma, CA, 909-948-2465) arrived to service our RO system (Reverse Osmosis water purifier).  It should be serviced at least once a year, so every time we return to SoCal we call on him to inspect and service our system.  I first met Ruben in the early 90's about a year after we had an RO system installed in our home, so we have been dealing with him over 25 years.  During that time he has become a good friend, and I have referred him to several friends.  If you need an RO system in your RV and find yourself in SoCal at any point give him a call!

It had been about 7 years since we had the RO system installed in our Newell, and it was time to replace the 'membrane', so this service call was more expensive than usual.  In addition he replaced the filters, and the ultra violet light which helps kill unwanted bacteria and extend the life of the 'membrane'.

We watched a number of recorded TV shows Thursday evening ('Survivor', 'The Blacklist', 'Designated Survivor', 'NCIS: New Orleans') and were in bed dreaming of Friday by 10 pm.  Another nice SoCal day spent with all our windows open.  The cold of the Grand Canyon is but a distant memory now.

When you shop Amazon, please use our link (below) to access their website.......we will appreciate every purchase you make using our Amazon Affiliate link, and  remember, using our link will not add one penny to your purchase, plus we will receive a small commission which helps defer the costs of producing this blog each day.
Posted by Whatsnewell at 8:04 AM