"Standin' on a corner in Winslow Arizona...."

It would have been nice to cross Arizona in parts of two days, but we just didn't want to drive any further than 200 miles so we set out sights on Winslow, AZ.  We were here briefly about 9 years ago, but had never spent the night, or walked around town to any extent.  I turned on the big Kohler genset around 9 am in order to turn on the 'block heater' so we could turn the big Detroit Diesel over.  When it gets below 50 degrees it will not start without being warmed up a tad.....kind of like myself.  Within 30 minutes I tried the ignition and she fired right up.  We were merging back on to I-40 within 10 minutes heading eastbound and down.

Winslow sits at about 3,300' elevation, and Flagstaff sits at over 7,000' elevation so we knew we would be gaining almost 4,000' in elevation in our first couple of hours of driving.  By the time we reached Williams we were at 6,800' and had been driving for over an hour so we got off the Interstate and found a place to park for about 30 minutes while we took a walk around the downtown area..... 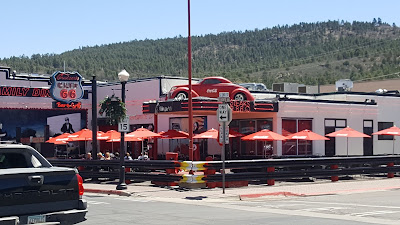 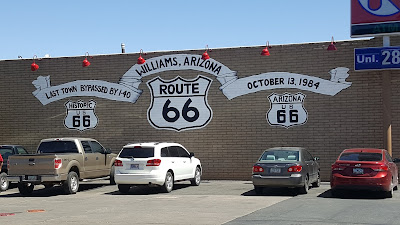 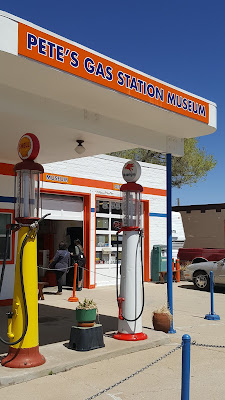 It is a little over 1/2 mile from one end of the Williams downtown to the other, and it is quite the colorful place.....totally touristy in every regard.  Thankfully it is still early in the season, and it was not too crowded.  The temperature was in the mid 50's, and it was quite refreshing.  By the time we returned to the Newell we had covered 1.3 miles.  Time to move along!

We finally topped out on the long grade up to Flagstaff about 12:15....altitude 7,325'.....now we had about a 60 mile downhill run to Winslow which sits at roughly 4,800' elevation.  It was nice to just set the cruise control and hang on to the steering wheel.  The landscape quickly changed from heavily forested to high desert in just a few miles.

Like California most of the Rest Areas between Kingman and Winslow were closed.  The only one open was less than 20 miles outside of Winslow, so why stop, right?  The drive to Winslow was totally uneventful....just like we like it!  On this day we opted to park at the local Walmart Supercenter just north of the Interstate arriving there just after 1:30 pm.  There is an Elks Lodge in Winslow, which offers electrical hookups for $10/night (two 30 amp plugs, one 50 amp plug, and one 20 amp plug), but it is about 1.5 blocks from the busy railroad tracks...... 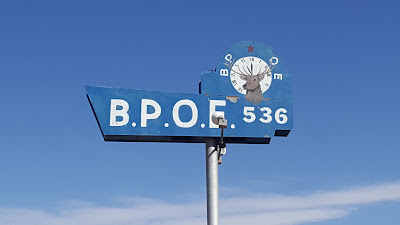 .....the local BPOE # 536 Lodge is about one mile south of the Walmart, and a we passed it as we walked the 1.5 miles to the "Standin' on a corner" park in downtown Winslow.  It took us exactly 30 minutes to cover the 1.5 miles.....the skies were clear, and the sun kept us warm in spite of the mid 60's temperatures at the time.  There are quite a few wall murals all over town..... 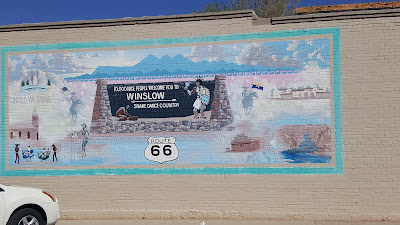 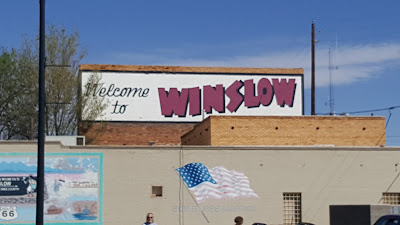 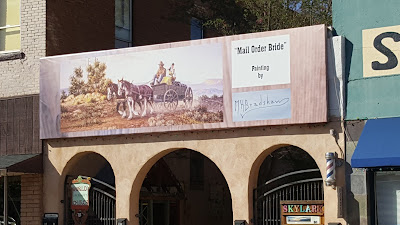 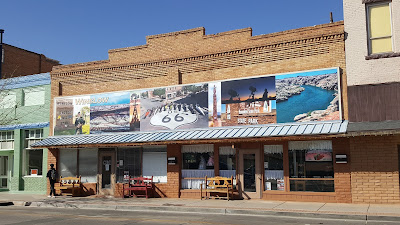 .....at last we arrived at the corner made famous by the 'Eagles' many years ago.  Winslow has, obviously, made the most of this musical notoriety by turning this corner into a tourist attraction which is visited by literally 100's of thousands each year.  The corner was busy for the entire hour we were in the area. 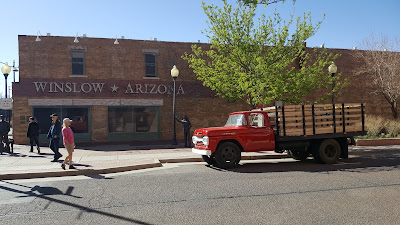 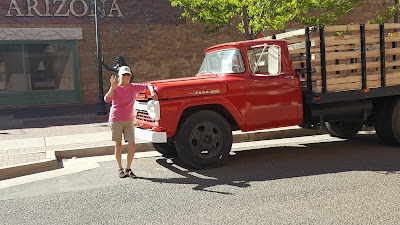 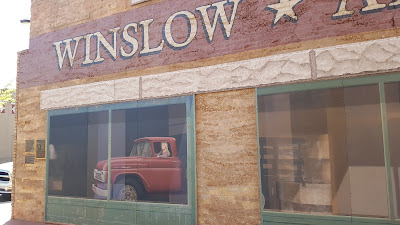 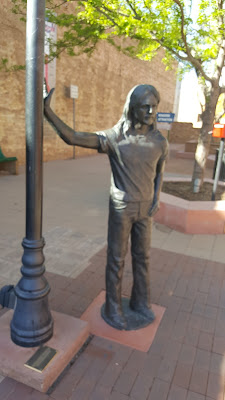 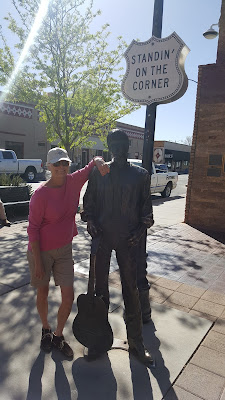 From there we decided to walk over to the famous La Posada Hotel.....one of the famous Harvey Hotels, which are all located along the railroad lines.  This was the last of the great Harvey Hotels completed in 1930, and designed by, of course, Mary Coulter.....it is reputed to be "fanciest of the Harvey Hotels along Route 66". 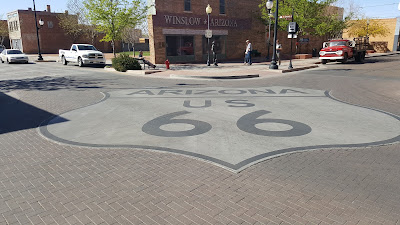 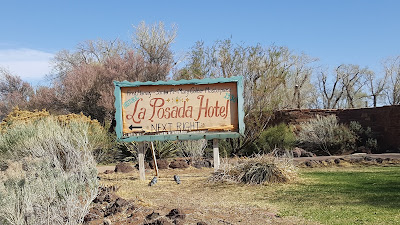 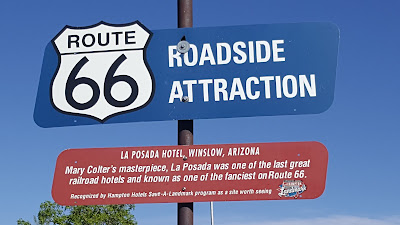 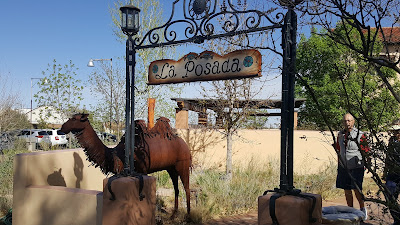 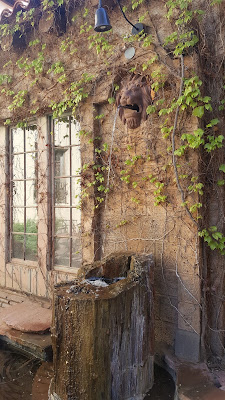 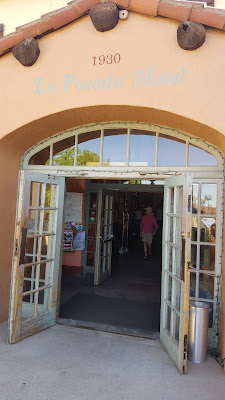 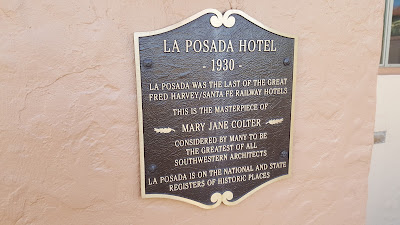 We spent time walking through the hotel taking in the ambiance and wondering what it would have been like to stay there back in the 30's.  We almost stopped off in the bar to grab a beer, but we still had almost a two mile walk home and it was going on 4 pm, so with TLE's encouragement we turned away and began our walk back to the Newell.  I spied this very cool Studebaker Golden Hawk in the parking lot as we exited the hotel......these cars were produced between 1956 and 1958. 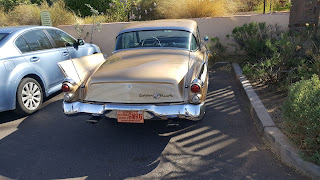 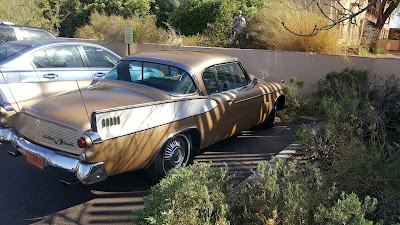 We were back at the Newell by 4:45 pm at which time I decided it was time to get up on the roof and clean the solar panels for the first time since late October when we were boondocking at Lone Rock.  Since we'll be dry camping most of the time as we head eastward they should be clean to provide maximum charge.

And that was pretty much our Wednesday.  Being able to explore places we overnight at is one of the things I love about moving across this country.  If you just get out and walk it is amazing what you will see!


When you shop Amazon, please use our link (below) to access their website.......we will appreciate every purchase you make using our Amazon Affiliate link, and  remember, using our link will not add one penny to your purchase, plus we will receive a small commission which helps defer the costs of producing this blog each day.
Posted by Whatsnewell at 7:12 AM