The big blow out would normally have been on July 4th, but  since President Trump was going to be here on the 3rd it became the 4th......right?  From the time we got up Friday you could hear, and see the evidence that this day was different from all the other days we have been here at Keystone.....there were way more people, patriotic bunting was on display everywhere, and people were beginning to congregate at the best viewing sites for the fireworks display at 9:30 pm.  Every time a law enforcement vehicle drove by you could hear the gathered crowd cheer them....very refreshing in light of the times in which we live....... 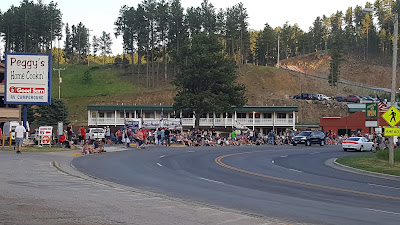 .....the convenience store was extremely busy all day long, and there was rarely a moment when the lines at the checkout counter were less than 4 people deep.  When I arrived for my 5 hour shift at 5 pm the store was packed, so I immediately headed for the cooler to restock the shelves with beer, water, Gatorade, Monster drinks, Arizona ice tea, Coke, Dr. Pepper, etc.  I spent over an hour getting things back up to speed, and throughout my 5+ hours I spent 80% of my time there trying to keep up with the water and beer demands..... 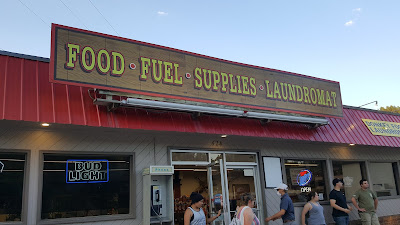 .....I was inside working when Trump's helicopter flew over, but TLE was on duty snapping the following pictures...... 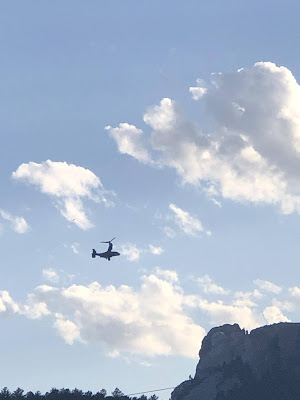 The POTUS is arriving 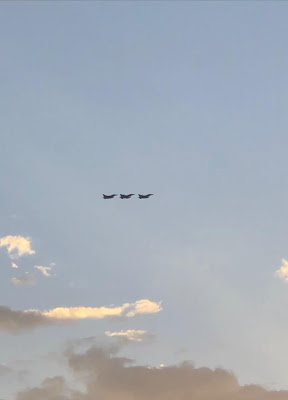 A lot of jets flew in formation over Mt. Rushmore 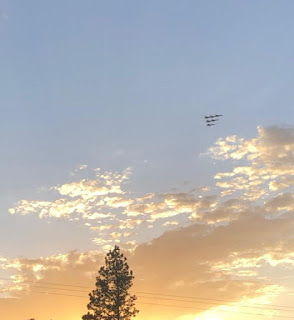 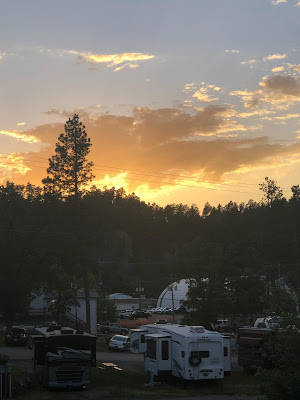 At last the sun began to set, and we knew the fireworks were not far behind 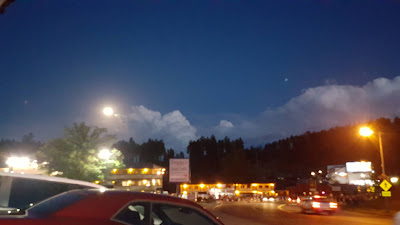 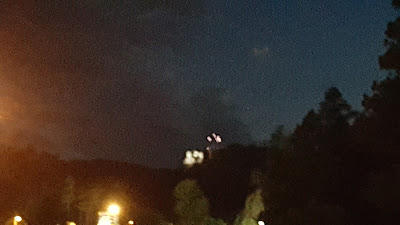 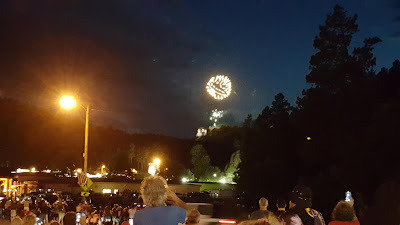 A 45 second video of the fireworks show 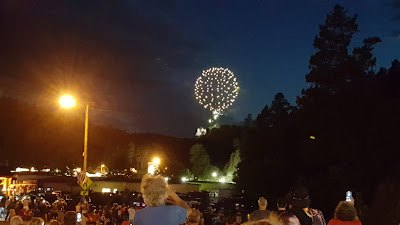 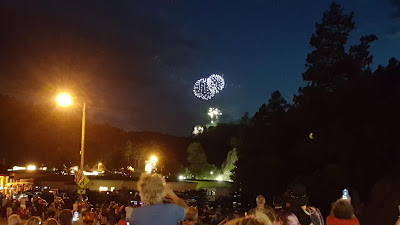 ....around 9:35 pm I walked up the street toward Mt. Rushmore to get a view of the beginning of the fireworks show, and arrived there just as they began.  I only stayed a few minutes as I heard the cooler calling my name once again..... 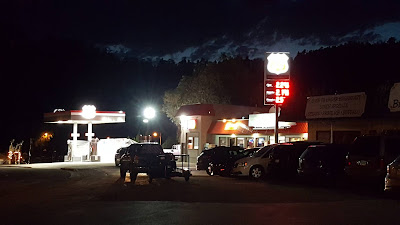 ....I never really caught up with the restocking, and emptying of trash cans after being gone for just 10 minutes.  Thankfully Rich and Marnie came down to the store after the fireworks show ended and helped us out.....while Rich restocked the cooler I emptied the multitudinous trash cans, which were all overflowing with effluent dropped off by the departing crowd.  By the time we finished it was going on 11 pm, and I was ready to walk home.....of course, just at that time it began to rain.  Fortunately, I made it home just before the skies really opened up, thus avoiding a thorough drenching.  Here in South Dakota when it rains hard, it almost always hails a little, too, but the hail stones were not nearly as big as the other night.  Nevertheless, when it hails it gets quite loud inside the Newell.

My 5 hour shift ended up being almost 6, but it all turned out well in the end.....when you are busy the time seems to fly, and that is how Friday night seemed.....thanks for stopping by!

When you shop Amazon, please use our link (below) to access their website.......we will appreciate every purchase you make using our Amazon Affiliate link, and  remember, using our link will not add one penny to your purchase, plus we will receive a small commission which over the course of a year adds up to enough to by a tank of diesel for which we thank you very much!
Posted by Whatsnewell at 8:26 AM