On this date in 2016 I had just been discharged from Pacific Eye Institute after my first cataract surgery....on our way home TLE stopped off at the local In 'N Out Burger to buy me breakfast.......I hadn't eaten for 14 hours↴ 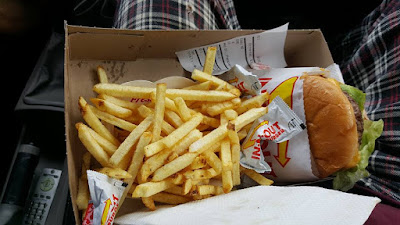 'Breakfast of champions'
By the time 10 am had rolled around Sunday it had not rained for about 10 hours, and was not scheduled to rain for another 13, so it was off to work my 2 hour shift.  The wind damage around the park was evident pretty quickly......there were tree limbs and small branches down everywhere, but no trees within SRRVC came down.  There were a couple of trees down on the ocean side of US-101, but they were well off the highway and causing no issues, so we'll get to them another day.  I spent the first 30 minutes of the shift helping Terry repair the TV cable at site 18, then an hour with Terry up at one of the rental houses owned by the owner of SRRVC (Fairwinds) installing a new ceiling light fixture in the kitchen, and removing some old mini blinds, which had been replaced by a contractor. Then we spent about 30 minutes removing a hanging tree limb, which had broken, but not yet fallen to the ground....it was over an often used walking path, so we thought we should be proactive by cutting it down.  The last 15 minutes were spent cleaning 5 sites of departing customers. 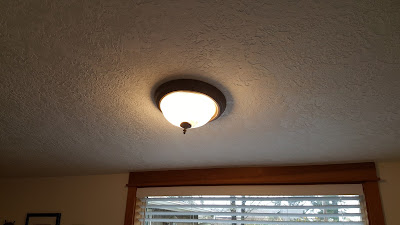 On the Wuhan Flu front there have still been NO deaths here in Lincoln County since we arrived exactly 2 months ago.  There are new cases being reported in our county, but there is also more testing ongoing so I guess that makes sense.  Many people do not even know they had it, or have it as the case may be.  The three Pacific Coast states (California, Oregon, and Washington) are discouraging any unnecessary interstate travel for the next couple of months....they are not prohibiting it, but they are strongly discouraging it.  Of course, TLE and I continue to be completely asymptomatic.

Over the previous 3 days of almost continuous rain and wind we discovered wet carpeting in the bedroom on the passenger side at the very back.  After some exterior inspection I determined it was coming in through the seam where the riveted aircraft aluminum siding overlaps the rear cap.  Fortunately we carry a ShopVac with us, and were able to vacuum out most of the moisture from the carpeting, and on Sunday, without any rain for a number of hours I was able to reseal that seam with clear, silicone caulk.  As of this writing the moisture as not reappeared.  So, once again, just like in a 'sticks and bricks' home, something goes wrong, you diagnose it, fix it, and then get on with your life.

Posted by Whatsnewell at 8:25 AM