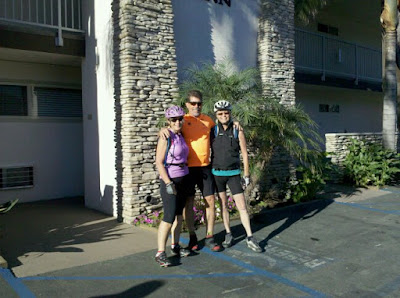 I was able to work my two hour shift Thursday, and it was, in fact, sunny!  We knew, however, that we were about to be hit with a wind and rain event Thursday evening that would far exceed anything we have thus far experienced here in Seal Rock, OR.  Terry and I spent the morning cutting some sketchy looking limbs off several trees to be sure they did not fall on anyone, or anyone's property within the park.  While we were thus engaged a branch we had just cut fell and sheered off a water spigot....uh oh!  In one second our tree trimming exercise transitioned into an emergency pluming repair.  While I notified our customers in the area of sites 1-7 we were turning off the water, Terry went to the tool shack to pickup some PVC pipe so we could effect the necessary repairs.  Within minutes of the mishap all that was done, and I had shut off the water.  From beginning to end it took us about 30 minutes to make the repair, and turn on the water again.  By that time my two hour shift had come to an end.  I was home well before TLE, who had a lot of phone calls Thursday morning, but was eventually home by 12:15 pm. 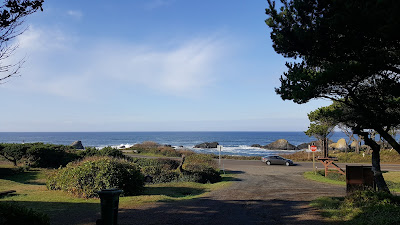 On the way to work

I'm sure it has not gone unnoticed by my readers that this weekend (November 12-15) is Masters weekend.  Usually the Masters is played in April at Augusta National in Georgia, but due to the Wuhan Flu was postponed until this month.  This is one of my favorite golf tournaments of the year, and I can usually be found in front of a TV most of the day on Thursday, Friday, Saturday and Sunday watching as the drama of who will eventually prevail in this year's edition of the Masters unfolds.  Many of you will also recall that Tiger Woods is the defending champion this year, and he had a good first round recording a score of 4 under par for the first 18 holes......his lowest score in the first round of the Masters ever.

Due to the heavy overcast Thursday night there was no sunset to memorialize, and soon after darkness descended it began to rain, and the wind velocity began to rise.

Posted by Whatsnewell at 8:57 AM