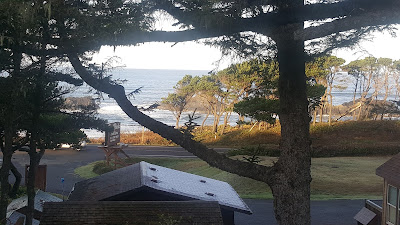 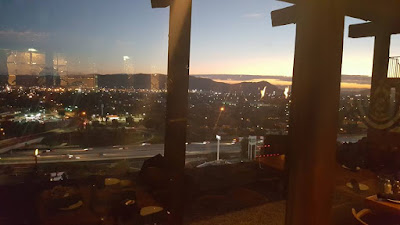 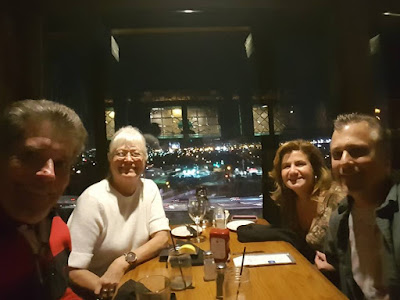 Since Thursday was Thanksgiving I only worked about an hour, while TLE completed her 2 hour stint in the office.  I cleaned a couple of sites for customers arriving later in the day, hauled some trash to the dumpster, checked the trash at the rental houses up the hill, cleaned up the grass in our site with one of the Stihl string trimmers, and called it a day.
Ever since we arrived at Seal Rock I have been a little less than happy with how I positioned the Newell in our site.  Specifically, I wished I had parked about 2 feet further forward, as the rear wheels ended up on a slight downslope, meaning the front end was high.  In order to level the coach we had to completely lower the front end as far as it would go, and raise the rear end as far as it would go putting the air suspension system  at its extremes.  Additionally, this site is slightly off from side to side, meaning it is slightly high on the passenger side, so to level from side to side the system is put at further extremes.  As a result, while we were able to level it, it never stayed level for very long.  I've been thinking about how to solve this problem, including moving the trailer forward about two feet, but that would be rather involved since I had to jack up the passenger side of trailer and place two lengths of 4" x 4" wood under those wheels to level it.  I would have to reverse that process to move it, and then jack it up again.....you see what I'm getting at.  So what to do?  There is around a 3 foot gap between the front of the Newell, and the rear of the trailer.  Short of moving the trailer I decided to fire up the big Detroit Diesel 6v92, move the coach forward as far as I could without hitting the trailer, and then move gravel to the area where the rear wheels had been to raise that area, then dig small trenches where the front wheels reside when the coach is moved back into position.  I figured I would do just enough to get the coach level from front to back, and then we would only have to worry about leveling from side to side.
I carry a 'square point' shovel with me for just such tasks as this, so after TLE helped me move the Newell forward I got to work raising the gravel pad in the rear of the side up a few inches, and then digging 3" deep trenches in front.  All this took me about an hour, but by the time I was done, and had moved the Newell back into position the Newell was perfectly level from front to back!  I love it when a plan comes together!  All we had to do, as I had hoped, was to level from side to side and we were good to go....... 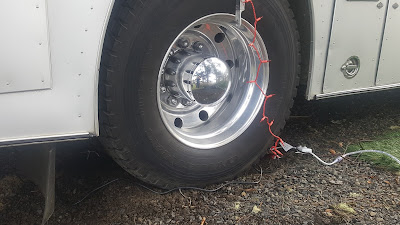 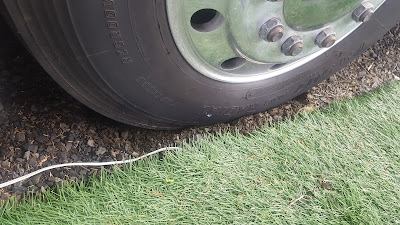 ....and the front pad lowered about 3".....perfect!
......while I was so occupied TLE was busy in the Newell kitchen preparing our Thanksgiving meal.  We were not planning to eat our Thanksgiving dinner until around 6 pm, so about 3 pm TLE and I took a break from our activities and partook of a charcuterie spread for a mid afternoon snack, which included martinis for each of us...... 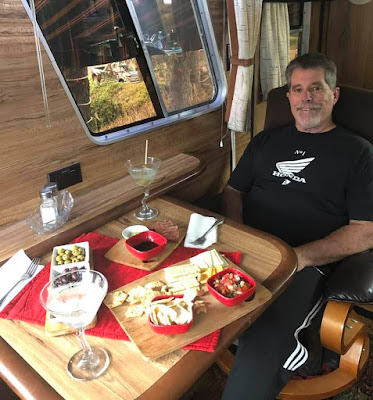 .....there were three kinds of olives, some taco chips TLE made from scratch, some smoked salmon, some pico de gallo, and some cheese.....a perfect pre-Thanksgiving dinner snack!
By 6 pm TLE had placed her Thanksgiving offerings on our dinner table....... 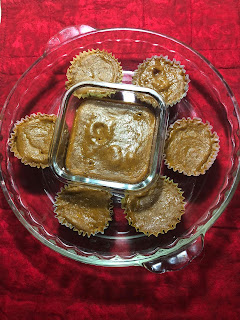 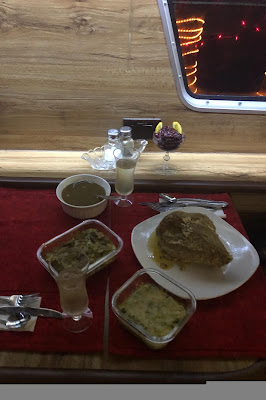 Turkey, stuffing, creamed broccoli, gravy, cranberry sauce, and some Prosecco
.....I am always blown away with what TLE can produce in such a small kitchen, and this meal was no exception.  I was nice to sit talking, listening to music, and just being thankful for who we are, where we are, and what we do.  So, here we are on Thanksgiving 2020 continuing to live the vagabond life.  We have an uninterrupted view of the ocean with its sounds permeating every nook and cranny of our lives.....life is good!
Thanks for stopping by!
When you shop Amazon, please use our link (below) to access their website.......we will appreciate every purchase you make using our Amazon Affiliate link, and  remember, using our link will not add one penny to your purchase, plus we will receive a small commission which over the course of a year adds up to enough to by a tank of diesel for which we thank you very much!
Posted by Whatsnewell at 9:58 AM