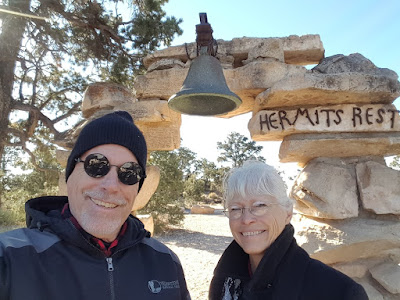 We began Friday (our Saturday) with no plan for the day whatsoever, but that changed around 9 am.  I have an in person meeting with my cardiologist, Dr. Mulvihill, on December 17th, and as part of that appointment he asked me to go to a local lab and get a blood panel done.  His secretary had emailed me a list of local labs, but none of them take Medicare, but there was one on Salem, OR that did.  We haven't left the Oregon Coast since we arrived here on September 15th, so a trip into the interior seemed to be in order.  Additionally there is a COSTCO in Salem (score), and a Trader Joe's in Corvalis (on our way to Salem....score again).  We have not visited either of these institutions for months, and they each carry products we need to resupply.  We had planned to do the 'resupplying' when we fly down to SoCal for Christmas.  Anyway, by 10 am we were on the road up to Newport, and then east on US-20 to US-34 and ultimately I-5.  The entire 88 nile drive took us about 1.75 hours.

On our way to Salem we stopped off at the local Verizon store to drop off TLE's old mini iPad to be backed up, and then have that backup transferred to her new mini iPad hoping to pick up the 'ready to go' new mini iPad on our way back home later in the day.

We arrived at the local Salem Safeway grocery store which also hosts a branch of Quest Diagnostics within the store around noon time.  They accept Medicare, and we have used their facilities previously in other parts of the country.  While I gave up a vial of blood TLE did a little shopping.  It was a very smooth, seamless process for me, and I exited the lab at almost the same time TLE was done....perfect!

Next up was COSTCO, which was just a few miles further north on I-5.  This is probably the first time I have visited a COSTCO in the last year where my main purpose was not to pick up a prescription.  I think we were in and out in about 30 minutes.....a pretty fast COSTCO visit for us.  From there we headed back south on I-5 to Corvalis (home of the Oregon State University Beavers) to visit the local Trader Joe's.

The traffic on US-20 and 34 was really pretty decent for a Friday with very few slowdowns.  We were back in Newport by 3:30 pm to find that TLE's old min iPad was still in 'backup' mode, so we bid the Verizon staff adieu promising to return Saturday.  We arrived home just as our yard lights came on.....4 pm.  Within minutes we had our spoils from COSTCO and Trader Joe's inside, and being put away by TLE.

I also received a text around the same time on my phone advising the new ROKU TV I had ordered to replace the recently deceased VIZIO 24" TV in the bedroom had been delivered so I walked down to the park office to retrieve it, and install it while TLE finished putting away the groceries.  We have limited space in the bedroom for a TV, and the only space available can only handle a 24" TV.  There is only one brand of 24" ROKU TV sold by Amazon, and that one is made by Westinghouse.....at least it has their brand name upon it.  It took me about an hour to remove the old VIZIO, and install the new Westinghouse ROKU.  Then it was just a matter of connecting it to the internet to update its software, register it to my ROKU account, and then download the streaming channels we have on our other ROKU TV's, of which we have three now.  The only non-ROKU TV we have now is the one in the trailer.... 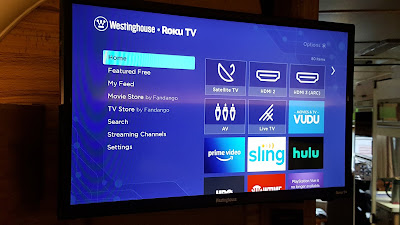 ....we don't watch TV in the bedroom much at all, but it is nice to have it available.  I think this brand new ROKU TV cost less than the old NON-smart VIZIO.....amazing!

Even though we had a very clear day Friday, by sundown a large cloud bank had arrived on the western horizon, which completely obscured the setting of the sun, so no sunset pictures for Friday.

Posted by Whatsnewell at 9:26 AM