You know how sometimes your expectations about a place get built up over time, and when you finally visit "that place" it just does not quite live up to expectations, let alone your own hype?  Well, I've been thinking about Key West for most of the last 12 months knowing that at some point in 2013 we would be here.  It is one of those places that has always had a certain mystique to me......Ernest Hemingway called it home for 11 years back in the 30's.....and that is probably when it was at its best.   It was a remote island arrived at by boat.....now it is connected by the Overseas Highway which feeds thousands of vehicles a day into its downtown, has a large airport where jets take off and land all day, and cruise ships make frequent stops......it is no longer a remote oasis.  The Key West with which Ernest and Pauline Hemingway fell in love in the 30's no longer exists......it has become a caricature of itself.

Today, Sunday, February 17th, 2013, it is a crowded tourist trap......today it is wall to wall people.....you have to walk sideways to go down the street.  If you get out on the "edges" of the town you can still feel its charm.....you can look across the Caribbean and see nothing but emerald colored water to the giant horizon.......like the picture below, but walking down Duval, Whitehead, Caroline, or Emma streets it is hard to imagine why anyone would want to spend much time here today.  The restaurants, hotels, museums and gift shops, which make up 99% of the downtown businesses are just overflowing with people who seem to spill out on to every sidewalk.

We finally got ourselves in gear around 9:30 and headed southwest on the Overseas Highway (aka: Highway 1) to Key West.  It is only 52 miles distant from the Jolly Roger Travel Park, but it takes around 90 minutes to get there.  We arrived around 11, found parking in the Westin Hotel parking structure for $4/hour....there goes $20 and we haven't even exited the parking structure yet. 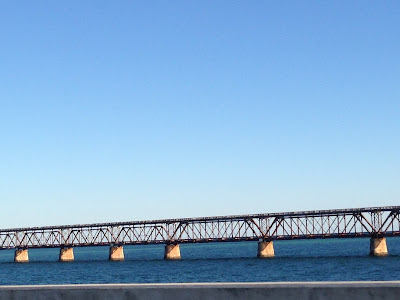 A section of the old Oversea Highway

A beach scene along Highway 1 in Key West....mile marker 2

Our first stop was "Mel Fisher's Treasure" Museum......a friend, who is an investor, called me a few days ago and said he could get us free passes to the museum, so we picked up our "will call" tickets and began the self guided tour of the museum (thank you Tom and Nancy!).  Mel Fisher's Treasure is actually a pretty cool place.  In 1985 after 16 years of searching Mel and his treasure hunters found a Spanish galleon named the Atocha, and over 40 tons of silver and gold worth in excess of $450 million dollars!  It was very interesting to see jewelry and other things that had been underwater for 100's of years and still looked beautiful.  The Lovely Elaine surrounded by objects of beauty.

Afterwards we walked a block over to the dock area where large cruise ships "park" while their guests flood Duval Street, and all of the surrounding streets.....too many people in a small place reminds me of Disneyland on a holiday weekend in the middle of the summer, except the temperature was hovering around 59.....brrr!

Down by the cruise ship dock

From there we walked off in search of a place to eat lunch......every restaurant, pub, bar and dive was packed full of people.  We walked up and down Duval, Caroline, Whithead, Front, Southard searching in vain.  We finally settled on the Hog's Breath Saloon just off Duval Street....the only two seats available were at the bar.....their beer selection was meager, but at least it was draft.....I had a Blue Moon Belgian White, and TLE had a seasonal Samuel Adams.  For eating I had the Black and Bleu Burger.  The food service was very, very slow, which is understandable (still not acceptable) since half the population of the free world was in Key West Sunday afternoon trying to get lunch!

After lunch we walked over to the Harry S. Truman Little "White House".  Key West was a favorite vacation destination of President Truman......during his time in office he visited Key West at least 11 times.  There was a tour that we could have paid $18 to take, but we chose to just see the "free" exhibits.  Next up was the Key West Museum of Art and History which cost us $12 to tour, but was definitely worth the price of admission.

After that we were pretty much done with our day in Key West....it was going on 4:30 and time to begin the 90 minute drive home.  We paid the $20 ransom to get our car out of the parking garage and headed for home, arriving just in time to catch this amazing sunset!

Visiting Key West made us appreciate the laid back, uncrowded 5 weeks we spent in Cedar Key.....it must be more like what Key West was back in the 30's, 40's and 50's.

Posted by Whatsnewell at 5:21 AM