TLE doesn't think these look like mug shots....well, she's probably right about hers, but mine looks close.  I have never had a passport, and TLE had one back in the 60's, but never renewed it.  She went to England for a track meet (she won all her events, by the way), so she got one then, but it's been over 40 years since it expired.  We had planned to get this done before we left on our travels over a year ago, but just never got around to it.  It's probably that "jello" thing.....you know, as in "plans written in".......we just were not sure when we would need them, so we kept procrastinating.

Well, it looks like we'll be entering Canada some time in late June, or early July this year.  Our only near term plans are a Newell rally in the Black Hills of South Dakota June 22-29. One of our Newell friends who will be attending that rally has suggested we drive up to Calgary, Alberta, Canada for the "Stampede", and to just do some site seeing......Banff, and Lake Louise are not far.  Another Newell friend who lives in Canada and is camp hosting in an RV park in that area has secured three RV sites for us in his park for that week (a third Newell friend will be joining us)!

So, finally, Tuesday we had our paperwork completed, and printed along with our certified copies of our birth certificates, copies of our drivers licences, front and back, and SS cards.  We had an appointment at the Ft. Pierce main Post Office at 11 am to get pictures taken, pay our fees, and file the paperwork......BUT we got a call from the post office about 10 am advising the Passport lady was sick, but referring us to the Martin County Courthouse right here in Stuart who take "walk ins".  TLE called to verify they did, and also that they could take the pictures....the answer to both questions was in the affirmative, so we headed right over.

Apparently getting there in the morning is the right time to go as there was no line, and we were promptly taken care of by the court clerk.  The pictures above will appear on our U.S. Passports.  So, in 4-6 weeks we should have our Passports.  You may be wondering why we have to have Passports to enter Canada......well, we don't.  It is our government that requires us to have a Passport to re-enter the United States from Canada.  It wasn't that many years ago that you could enter Canada, and return to the U.S. with just a drivers license.....I did it twice back in the early 2000's (2000 and 2001), but then 9/11 happened.

After that task was completed we drove over to the Supercuts on Federal Highway to get haircuts......yes, that is plural.  I got my hair cut last April at this same store.  My last haircut in Ocala about 3 weeks ago did not last the usual 4-5 weeks for me.....the top was just getting too long.  TLE needed a trim, so she took a seat right next to me.  She's gotten her hair trimmed/cut 3 times now at Supercuts, and she has only been pleased with the result once.......the once was not this time.  It looks good to me, but what do I know, huh?  I've been going to Supercuts since 1984, and in all those years have only had one haircut I was unhappy with......April of 2009 in east Texas.  Below you can see the results, and judge for yourself.....it was a little breezy at the Manatee Island Grill, so don't let that influence your opinion of TLE's hair. 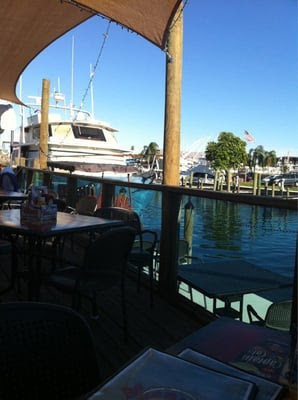 After all that "work" we were hungry so we decided to try out a local restaurant in Port Salerno we had not tried before......Manatee Island Grill.  What a nice place, right on the water, and the food and service were great.  It was nice to just sit and talk by ourselves.  We have loved visiting so many great friends the past month, but have missed just being by ourselves.

We got back "home" around 6, and since we had a late lunch we just snacked on chips and salsa for "dinner", then settled in to watch NCIS and NCIS L.A.  Both were great shows, as usual.

Wednesday is another moving day, and another round of "until next times"....we'll be moving up the coast to St. Augustine for 4, or 5 days, but on the way we may overnight near Melbourne....we're hoping to hook up with Chris and Cherie for lunch there.  If we can get the nearby Lowe's to let us park overnight we'll do that.....if not then we'll head up to Daytona to the Cracker Barrel where we overnighted last year.

Thanks for stopping by!
Posted by Whatsnewell at 4:35 AM