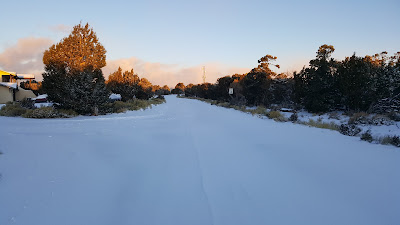 .....it took me a little longer than the usual 10 minutes to reach the store as I walked the road all the way to work.  I may, or may not have mentioned in yesterday's post that SR-64 over to the Village was closed Monday afternoon, and it remained closed until noon time Tuesday.  As a result we had a few people visiting the store who were waiting for the gate to be opened.  Some waited up to 5 hours before they were able to proceed westward.  All that being said the store was very 'unbusy' once again Tuesday morning.....I dropped a grand total of $16.09.  Now TLE was another story.....she dropped over $700.....once the gates were opened it got very, very busy the rest of the day.

After I got off work I decided to walk down to the Watchtower to take a few pictures of what it looked like after a snow storm....... 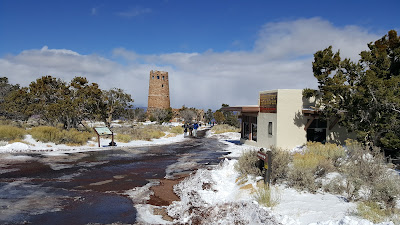 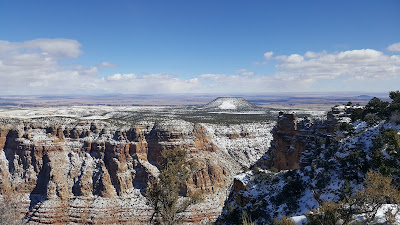 Looking south toward Cameron....the volcano is in the foreground 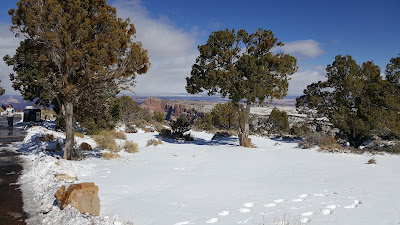 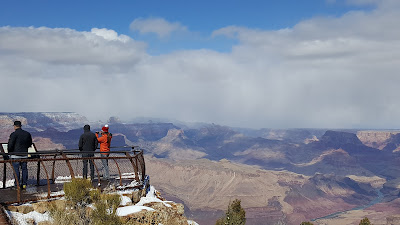 Looks to be raining across the canyon.... 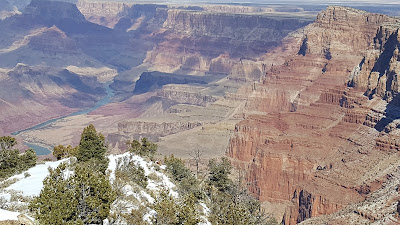 ....we had a nice sunny day, but the high was only 31º F, so there wasn't too much of a snow melt.  By time I walked home the roads had all been plowed and I was able to walk on asphalt most of the way.

Since it had been snowing so hard on Monday I was not able to dump the black tank as is my habit, so that got put off until Tuesday afternoon.  Usually it takes me about 10-15 minutes to dump the tank and flush it out a few times, but on this day it took close to an hour.  Everything was frozen including the hose I use to flush the black tank.  I had to remove that hose and replace it with another in order to flush the tank.  Fortunately I was able to stand in the sun waiting for the black tank to fill up each time with fresh water.  I was done with the deed by 4 pm, and spent the rest of the afternoon reading, and watching Winter Olympics coverage.  TLE didn't get home until 5:35 pm.....a lot of people came into the store right at the end of the day and kind of set her back about 15-20 minutes in her closing process.

The prime time Olympics coverage featured the women's figure skating competition.  All three of the U.S. women who have a chance to earn a medal fell during their routines.....I have never seen so much 'falling' in Winter Olympics figure skating as there has been this time around.  I feel bad for these young kids who are over hyped by the U.S. media and seem to crumble under the pressure of their expectations.  In other action the U.S. hockey team was defeated by the Czeck Republic in a shootout and eliminated.  Lindsey Vonn came away with bronze in the women's downhill competition becoming the oldest woman to win a medal in Winter Olympics alpine skiing competition at age 33.


When you shop Amazon, please use our link (below) to access their website.......we will appreciate every purchase you make using our Amazon Affiliate link, and  remember, using our link will not add one penny to your purchase, plus we will receive a small commission.
Posted by Whatsnewell at 5:16 AM