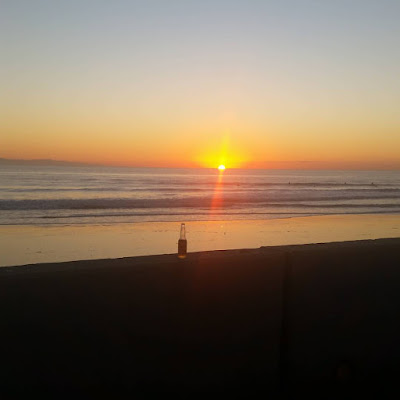 The deluge continued unabated all day Saturday, sometimes lightly sprinkling, and many times coming down with such great force we could not hear the TV at any volume.  At one point in the early afternoon I had to stow the satellite dish as the wind was rising again to around 35 mph, with gusts up to 50 mph.  We just hunkered down watching The Masters switching from satellite TV to streaming TV to watch the end of round three.  Dustin Johnson leads The Masters after 54 holes by 4 strokes at 16 under par....it seems it is his to lose..... 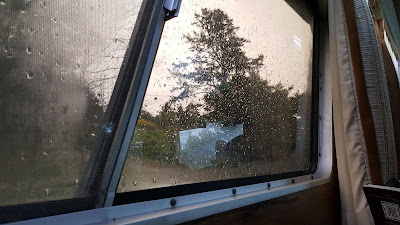 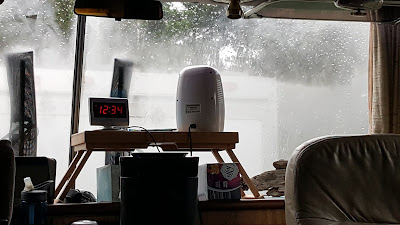 .....on a positive note the park WiFi has been wonderful, which has enabled us to stream hours of programming with no impact upon our Verizon data limits.  While we do have Verizon 'unlimited' on our phones, we are limited to 22 gigabytes per month on each device (we have three) using their 'hotspots'.  While that gives us a total of 66 gigabytes for streaming per month, we have occasionally bumped up against that limit over the last year as we have streamed more.  Having access to good WiFi for free is a blessing, and we have had just that three times over the last few years......at Smuggler's Den we had blazing fast WiFi, at RORVR we had the same, and now here at SRRVC we have very good WiFi.....not the best campground WiFi we have had, but very reliable, and consistent.

By the time we called it a day the windspeed had dropped to almost nothing, so I redeployed the Winegard satellite dish, and headed for slumberland to the sounds of the every present rain......I'll leave you with a familiar song by Creedence Clearwater Revival....."Who'll stop the rain?"...........

Who'll stop the rain?
.....thanks for stopping by!
When you shop Amazon, please use our link (below) to access their website.......we will appreciate every purchase you make using our Amazon Affiliate link, and  remember, using our link will not add one penny to your purchase, plus we will receive a small commission which over the course of a year adds up to enough to by a tank of diesel for which we thank you very much!
Posted by Whatsnewell at 8:13 AM