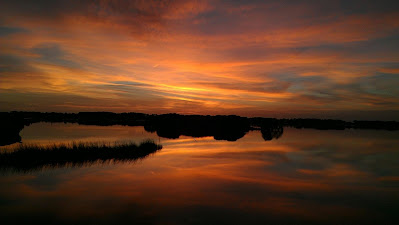 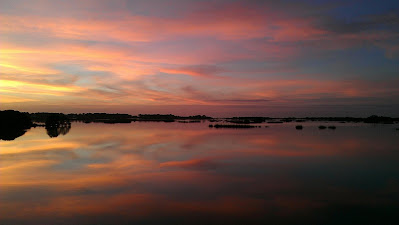 As I reported yesterday morning I was called off work due to rain, and rain it did all morning, and into the afternoon.  Rain came down in sheets.....sometimes sideways as the south wind rocked the coach to and fro.  Just before Noon scampered out to the VW, drove down to the office to retrieve TLE, and then into Newport we went to purchase some groceries.  We haven't done a BIG grocery shopping for 3 weeks since the old Dometic gave up the ghost.  Now that we have the new Dometic Americana II fridge we can stock up again.

By the time we arrived at Fred Meyers the rain had slowed to a drizzle.  After filing the hatchback with our spoils we headed to the Fred Meyers fuel station to redeem our fuel points....20¢ off per gallon.  We haven't fueled up the Beetle since we drove into Salem on December 5th.  Of the 330 miles we put in this tank of gas 190 of it was driving to Salem and back, so we've only put 130 miles on the car since then.  In most places in Oregon you are not allowed to pump your own gas.  It must be done by an employee of the station.  On a day like Wednesday I was happy not to have to get out of the car to do so.

Within minutes after arriving back home, and carrying our groceries inside, it began to rain in earnest once again......good timing, no? I do not believe I left the Newell the rest of the day.

I have been watching a streaming channel called Pluto....it's free, and it has a bunch of sports channels which show previously played football, basketball, soccer, golf matches, etc.  Wednesday they were streaming golf tournaments Tiger woods has won over the years....there are a lot of them....some 82 at last count.  They essentially boil 72 holes of golf played over four days into a one hour segment for each tournament.....very cool.  In one particular stretch of his career he won 6 in a row, and a couple of times 5 in a row.......that's more than most pro golfers win in their entire careers.

As I sit here composing my latest offering we are just 15.5 hours away from celebrating the arrival of the year 2021.  TLE and I will clink glasses of champagne at the appointed time wishing our world a better year than 2020 was, as well as good health, the continued pursuit of happiness, and love to all those we know.  Thank you for continuing to be apart of our seemingly never ending nomadic journey.

Posted by Whatsnewell at 8:51 AM