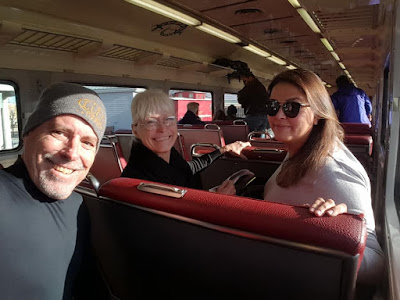 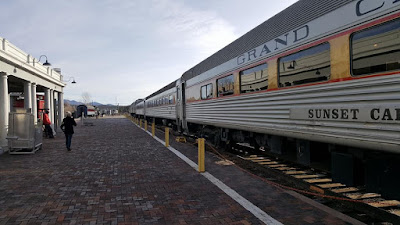 Initially I was called off work by Terry around 9 am as it was raining, but by 10 am it had stopped and the sun came out resulting in a second text message asking me to report for work at 10:30 am, which I did.  This was my view as I walked to work Monday morning...... 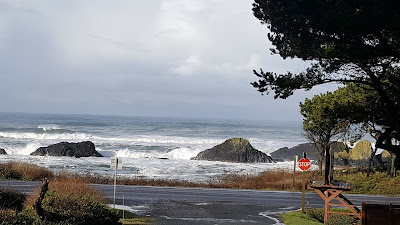 .....my how things can change quickly here in Coastal Oregon!  As I reported in yesterday's missive, the winds were quite high Sunday, and the result was a downed tree near site #40.  This is the biggest tree to fall this season, and it may take us a couple of days to cut it up...... 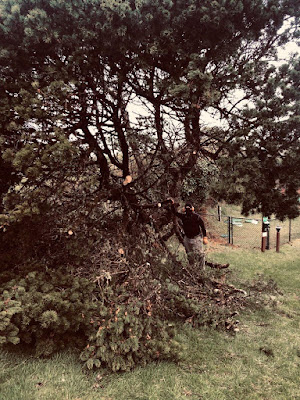 Moi by the downed tree near site #40
......a large branch from another tree overhanging site #37 broke and landed on the 5th wheel there, but caused no damage.  Terry had to call out a tree guy Sunday evening to cut the branch off the 5th wheel.  It required two complete trailer loads to haul the remains of that broken branch up to the burn pile.   Then we got to work to begin cutting up the tree by site #40.  Just as we were hauling the second trailer load of that downed tree it began to rain again, so we called it quits for the day at 11:45 am.
Terry let me know that they are having a truck load of gravel delivered Tuesday morning to site #A-2 (the one next to us) so we can level that site properly.  We do have a gravel pile here at SRRVC located on the opposite side of the park from our site, but it would take quite a while (probably 10 bucket loads) hauling one bucket load at a time up the hill to the site.  I'm sure we'll work some on that project Tuesday.

After changing out of my work clothes I settled into my recliner to read another book.  TLE headed off to work for her two hour shift around 2 pm, leaving me to continue reading, with an occasional nap thrown in for good measure.  It rained for another hour, but then the sun came out again to close out the day.

Posted by Whatsnewell at 8:20 AM