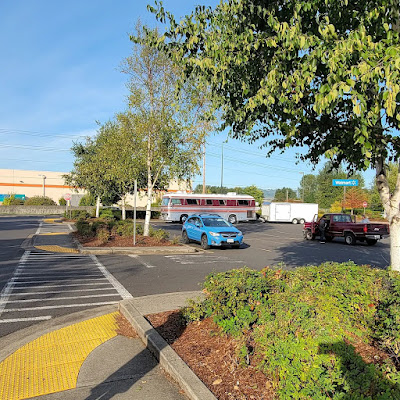 This post will be a compilation of Monday, Tuesday, Wednesday, Thursday, Friday and Saturday.....first up is.......
Monday:
As has been our custom on our other days off work we began our day with another 2 mile roundtrip walk out to Jess Valley Road. I didn't record the walk on Strava this time, but based on our pace I'm sure we were in the 33 minute range for the entire walk once again.
I spent some time weeding the grass in our site....when we arrived there were a lot of dandelions, and many other types of weeds infesting another wise nice look lawn, but over the course of the summer I have been able to eliminate most of them via good, old fashioned hand weeding, and using a systemic weed killer sold under the ACE Hardware brand name.....it has been very effective, and now the lawn is looking the best it has looked since we arrived. We're hoping when we return next April it will look way better than when we arrived this past April.  Additionally, we sowed some grass seed in a couple of areas that were a little thin on grass, and they have now filled in nicely.....

.....we were treated to a nice sunrise Monday morning, but I was a little late in getting outside to memorialize it.....

Tuesday:
There is an annual ritual which plays out in late September each year here at LPG&RVR.....it is called "punching the greens".  In order to guaranty the health of the golf greens all golf courses must do this at least once a year.  We have a machine which pulls thousands of plugs out of each green, and it looks something like this after the machine has done its job.....

A pile of plugs ready to be hauled away
......this task requires 'all hands on deck', so most every male worker was on hand to begin the job Tuesday.  Once each green has been "punched" the resulting plugs must be scooped up, and hauled away.  It takes about two hours to "punch" each green, including spreading sand on each of them to fill the plug holes, and it is strenuous work.  By strenuous I mean it is the hardest thing I've done this summer, and after doing it for one day I was flat out exhausted.  I wasn't even sure I would make it past lunch time, but I did, and by 4 pm we were dismissed for the day as it was too late to start another green.....thank goodness....lol!
Wednesday:
On Tuesday we managed to get greens 9, 8, 7, and 6 punched, and 9 and 8 sanded, so we met at green #7 Wednesday morning to get it sanded, and scraped free of excess sand, then moved on to greens6, 5, 4 to punch them, returning to greens 6, 5  and 4 after they had been sanded to scrape them, and that is as far as we got before we quit at 3 pm....why 3 pm...well the sander broke, and we could do no more.  I felt a lot better physically at the end of Wednesday's session.
Thursday:
The sander was fixed overnight (broken chain drive), so we hit the decks running Thursday morning punching 3, 2, 1 and the putting green.  We managed to get those 4 greens punched by 11 am, so took an early lunch while DeWayne sanded 3, 2, 1 and the putting greens.  After lunch we managed to get those four greens scraped, and were once again off work by 3 pm.  I felt the best I had all week at the end of the day.  And with that my work week came to an abrupt end.  Normally I would have worked through Friday, and been off work until next Wednesday, but we are going to begin to "punch" the back 9 Monday morning, hoping to finish all 9 holes by the end of the day Wednesday.  TLE continued to work her normal 4 day schedule (Tuesday through Friday).  This works out well for me as I will be off Friday, Saturday and Sunday and can get the trailer organized for VW insertion next weekend, and put away all of our decorative lights during those three days.  We plan to haul our anchor Sunday morning, October 9th, so it is definitely time to be putting stuff away.
Friday:
I managed to sleep in until 6:30 am Friday morning, but TLE was up at her normal 6 am time as she had to work and I did not.  After she went to work I headed out to the trailer to begin to put things away.  When we sit in one place for 6 months a lot of stuff gets pulled out and used.  There was so much stuff out that I actually had two folding tables set up to create more space to put stuff.....

....I took the above pictures sometime in late April, or early May, and you can see how congested the trailer was when I began to put stuff away Friday morning.  I worked on an off all day, taking a break at noon time to pick up TLE at the Clubhouse for her lunch break, then delivered her back at 1 pm.  By the end of the day I had managed to get enough done that I was sure I could finish by Sunday.
Saturday:
TLE and I slept in until after 8 am Saturday, and how wonderful it was.  By the time we finally got out of bed the sun was blazing in the front windows.  I have missed getting up with the sun.  When we get up on work days at 6 am it is still pitch black outside....it is so dark the solar lights we have deployed are still shining brightly.
For the first time in a few weeks we did not do our 2 mile out and back walk to Jess Valley Road as we had a lot to get done Saturday.  So, whilst TLE drove into Alturas to do our final shopping of our 6 month stay here at LPG&RVR I headed back out to the trailer to continue my organizing work, which included taking down part of our 'lido deck' stuff (Sea-B-Que, Cowboy wok, etc.).  By the end of the day everything looked quite different, and I was just a couple of hours away from finishing the task I began on Friday.....

Only one bike remains to be stowed, along with the table holding my tool bags

The Black & Decker Workmate is stowed, along with the bench grinder, and two of the bikes.  I also stowed the air compressor back into the passenger side engine bay

The awning over the trailer door is put away,

as are the sun screens, the Sea-B-Que and Cowboy wok on the 'lido deck'
.....Saturday evening we had out last potluck dinner of the season to celebrate three birthdays.....Kathy (Café Kathy - October 3rd), moi (October 3rd) and our good friend Duke (spends about 3 months here every summer - October 2nd).  It was also the annual BBQ'd Ribs cook off, and there were 7 entries.  We each tasted one rib from each offering (blind taste test) to determine the winner.  For the second year in a row Mike (golf course marshal) won again, while DeWayne (1st cut mower) placed second once again (I liked his the best, however). The party started at 4 pm (cocktail hour), followed by the rib tasting, and birthday celebrations....we were home around 6:30 pm.
I was able to watch my USC Trojans win their 5th game of the season vs. Arizona State, and remain undefeated  both nationally and in conference.  Their current ranking nationally is #6...their best start (behind Georgia, Alabama, Ohio State, Michigan, and Clemson) in a long, long time.
As I write we have just one week remaining on our contract, and it is bittersweet for us, as it often is, as we prepare to haul anchor and head south.  We have loved our time here at LPG&RVR.....the entire experience has far exceeded our expectations when we first accepted our jobs.  We look forward to, God willing, returning next April for another 6 month season, but we also look forward to our Winter jobs at Glamis North Hot Springs, which start later this month.  We haven't had a winter job since we worked at the Grand Canyon back in 2017/18.
Thanks for stopping by!
Posted by Whatsnewell at 9:11 AM