As I sit here Thursday afternoon composing my blog entry about Wednesday afternoon/Thursday morning I am basking in the glow of all the birthday greetings from so many people.......many people whom I did not know 20 months ago.  My universe of friends has increased exponentially since we left on our never ending journey, and as I read the varied birthday greetings, and see the names attached to them I feel rich beyond measure.  Thank you to all of you who have taken the time to send birthday wishes my way.....they are appreciated! 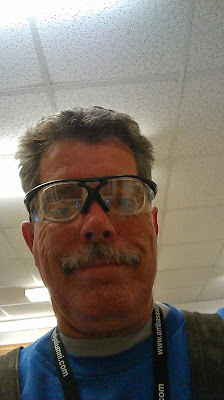 Taken just after midnight on my birth day anniversary

Now back to Wednesday afternoon.....I awoke at my standard time.....Noon.....I'm sure at some point I will begin to sleep for more than 4 hours at a stretch.  I know at Amazon it took me a couple of weeks for my body to switch over to my new schedule, but by that time we'll be done with the nocturnal lifestyle once again, and I'll have to switch back again.

I had some pressing insurance work that needed to be done before we left for work, and that took me a few hours.  Before I knew it I was staring at 3:30 and I needed to take a nap before work ensued.

Just like at Amazon the few hours separating us from our night time job seemed to fly by swiftly, and we were getting in the car again at 6:30 to head over to the "Factory" for our 3rd 12 hour shift in as many days.  It feels like we've been doing this for over a week already, and yet I see the calendar and know we've only done two 12 hour shifts so far with 19 to go.

I wrote about the ventilating system that must be created underneath the beet piles to keep them from turning into large compost piles, and here are a few pictures of the pipe that has been laid so far.  As the beets are piled these pipes will disappear under tons of sugar beets. 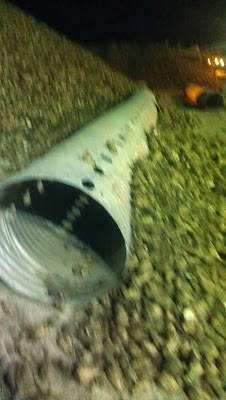 Below you can see the pipes running from the center of the pile to the left side of the pile. 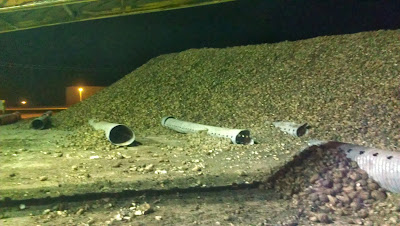 At the far right side of the pile you can see the ventilator fans in the end of each row of pipe.  These will be running for the next 5 months until all the beets are processed. 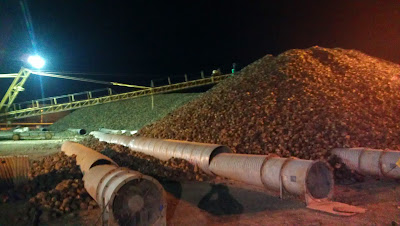 Each night we pretty much work the first 6 hours without a formal break.  There are just enough trucks coming through FP4 to keep us going non-stop.  But, this is a good thing....once that first 6 hours is done, it is lunch time, and we pretty much have 2-3 hours off until the trucks start again.  The remaining 3 hours seem to fly by. I always head over to the Scale House where TLE resides.  She always has a welcoming smile and a hot meal ready for me when I arrive.  In her office she has a full size refrigerator, a microwave, a coffee pot, and bottled hot and cold water.

TLE thought you all might get a kick out of seeing a very, very large sugar beet brought in by one of the drivers.....they, apparently, have a contest over the course of the harvest to see who can deliver the largest beet......this one is the biggest so far......reminds me of a what I think a meteorite might look like....what do you think?  This one is in the 15 pound range. 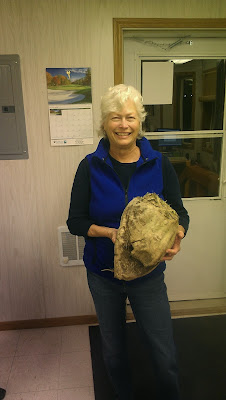 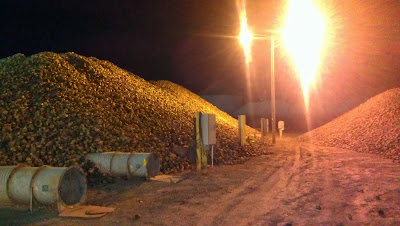 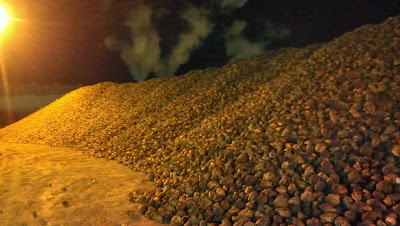 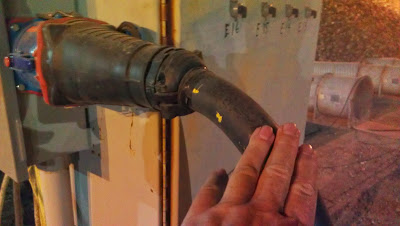 I got to know one of my workmates a little better.....I found out Dallas just turned 18 less than a year ago.......he enlisted in the National Guard on his 18th birtday, and was deployed within a few months to Afghanistan for 6 months where he was trained to be a sniper......you know, one of the guys that Mark Walhberg played in the movie "Shooter".   He says he made 23 kills over that span.....his longest shot from just under 800 yards.....I am still trying to process this information.

He just returned from his deployment, and due to cutbacks was discharged.  If you saw Dallas walking down the street you would never guess what he did for the last 6 months.  It's ironic that he is younger than every single one of my kids by a minimum of 9 years.  He is younger than FP2, which was built in 1978, the year my oldest daughter Meredith was born.

Our third 12 hour shift was much more laid back than the second.  We processed about 55 trucks over our 12 hour shift, and had no mechanical issues, so it was a good night.  It only got down to 39 degrees last night, and there was no wind so I was able to stay warm with a minimal amount of warm clothing.  I can't wear too much at 39 degrees because the physical labor warms me up pretty quickly and I start to sweat even at 39 degrees, if I have too much on.  Don't get me wrong, I'm not walking around in board shorts and flip flops, but I'm just wearing my bib overalls, and a long sleeve t-shirt over a base layer, and sometimes that's too much.

The day crew arrived a few minutes early so I clocked out around 6:59, and was in the car with TLE on our way home from another day at the beet pile here in Sidney, MT......3 down, and 18 to go....give, or take a couple.

I was going to take my customary hot shower right after we got home, but discovered, much to my dismay, that the pilot light on the water heater had blown out while we were gone so I had to wait about 30 minutes for the water to heat up.  We both got in bed by 8:30, and I was awake and up writing this blog entry by 1 pm.....ugggghhh...I need more sleep!  I'm just as amazed this time as I was last fall that I can actually get by on less than 6 hours sleep day after day with a few cat naps here and there.  Nevertheless, I don't want to make a career out of it.

Thanks for stopping by!
Posted by Whatsnewell at 12:51 PM