What a delight to wake up Sunday morning and see the temperature at 7 am 20 degrees higher than the day before in Idaho Falls.....what a difference 177 miles make.

I spent about an hour, once it warmed up enough, cleaning our awning mat, which became quite filthy in the muddy, dusty Richland County Fairgrounds RV ghetto.  I sprayed each side of it with Simple Green, then using a high pressure nozzle, sprayed it down, and actually got it as clean as it has been in over a year.  We hadn't even tried to put it back in its place in the basement storage it was so filthy.....now it can be returned to its proper storage place, instead of under the T-Bird in the trailer.  Once we get to my brother's Monday we'll be doing a lot more deep cleaning of the trailer, and coach.

We didn't get going until late morning, so decided not to do do the 2 hour round trip drive to Antelope Island, but drove up to Willard Bay State Park to check out their Cottonwood Campground for future possibilities, and found a number of sites that would work for us without disconnecting the trailer.

From there we headed back south on I-15 to 21st Street and back to the Ogden Old Town downtown area where we quickly found a parking spot and began our walk up one side of the street and then back down to the old Union Pacific Train Station which is now a museum.  Like most museums we have come across on our journey this one was also closed on Sundays, but there is a large outdoor exhibit of old engines, locomotives, boxcars, and cabooses.    The first one was the one below, built in 1939, belonging to a class of steam engines called "Northerns" which had a reputation for being fast.  This one has 6 foot high driver wheels and could attain a top speed of 110 mph!  Wait, what?  110 mph?  Amazing!  It could carry 23,500 gallons of water. 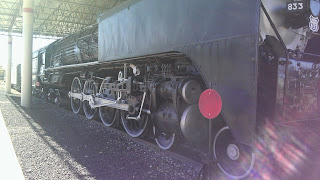 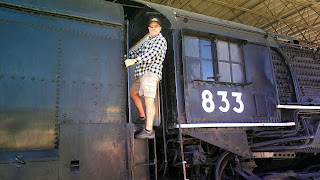 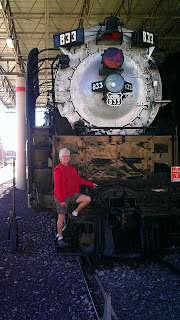 There were several other diesel engines, but this one really was amazing.  Read the placard I took a picture of below.  It was powered by a "diesel turbine", 8,500 horsepower engine; was 179 feet long; could pull 735 fully loaded cars, and carried over 24,000 gallons of fuel.  It was built in 1969, and there are only a few of them left in existence.  They were called the "big blows" because of the jet engine like sound they made. 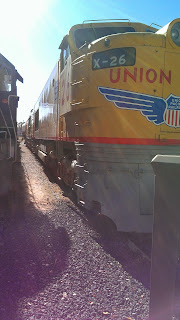 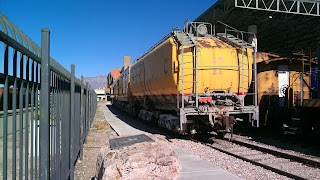 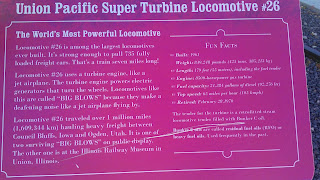 Saw this one old U.P. boxcar (below) with an interesting advertisement on the side......there were a lot of other great examples of switching engines, cabooses, freight engines, etc.  These were the two that caught our interest.  When you get out of your car and walk around you just never know what you will come across.  We originally walked over to the old station hoping the museum was open, and when it wasn't spent the better part an hour looking at these old trains. 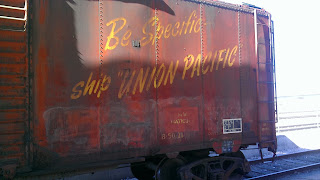 The weather continues to feel like early Fall here in northern Utah, and some of the trees are putting out some beautiful colors. 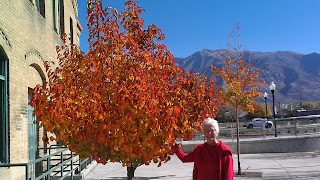 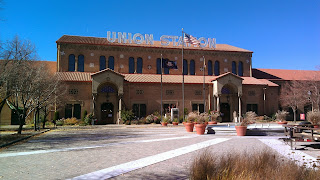 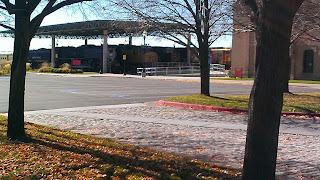 We walked back to our car and decided to go into this funky coffee shop we were parked right in front of......we had a couple of cups of some of the best French Roast coffee I have ever had. 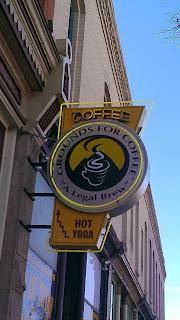 One mistake we made was not doing this walk Saturday, because like a lot of heavily Mormon areas, this downtown was mostly "CLOSED" on Sunday....there were a couple of cafe's open, and the coffee shop, and that was it.

We got home as the early NFL games were coming to a close....saw a thrilling ending to the Cowboys vs. Lions game with the Lions winning by one point on a last minute drive....by last minute I mean with 1:01 remaining the clock and no timeouts. I feel bad for my Cowboy friends.....like so many other games, they should have won this one, but found a way to loose.  The Bronco vs. Redskins game (tied 7-7 at half time) was pretty good until the the Broncos scored 38 unanswered points to win going away 45-21.

There was also another World Series game......the Red Sox prevailed 4-2....the game ended on a Cardinal player being picked off first base.....two unusual endings in a row!