It was raining when we went to bed at 10 pm Saturday evening......and every time I woke up during the night it was raining....sometimes hard.  Of course I always need some small thing to worry about on the eve of our departure from any given geographical point.  If it rains enough in a short period of time in Wittmann the 1 mile of dirt roads we must traverse from Tom's home to hit pavement sometimes become almost impassible. So, that is what I worried over each time I woke up to the sound of rain, and that is what I worried over as I stepped out of the coach first thing Sunday morning on to the somewhat spongy dirt surrounding our coach.......was it too soft?  Should we wait until later in the day to leave?  What if we get stuck?  I know......MADNESS!

I had gotten up shortly after 5 am Sunday because we wanted to be on the road by 7 am to get ahead of winds forecast for the area between Wittmann and Yuma.  In the past I have delayed our departure a day, or two to avoid winds.  I don't know anyone who looks forward to driving an RV in the wind, except maybe a tail wind.  On this day our direction of travel was essentially westward, and on this day the forecast wind was to be coming from the northwest.

We decided to stick with our departure time, and after saying our "until next times" we were on the road, and that is where some really good news comes into play......the speedometer works......and, therefore, now I once again have cruise control! 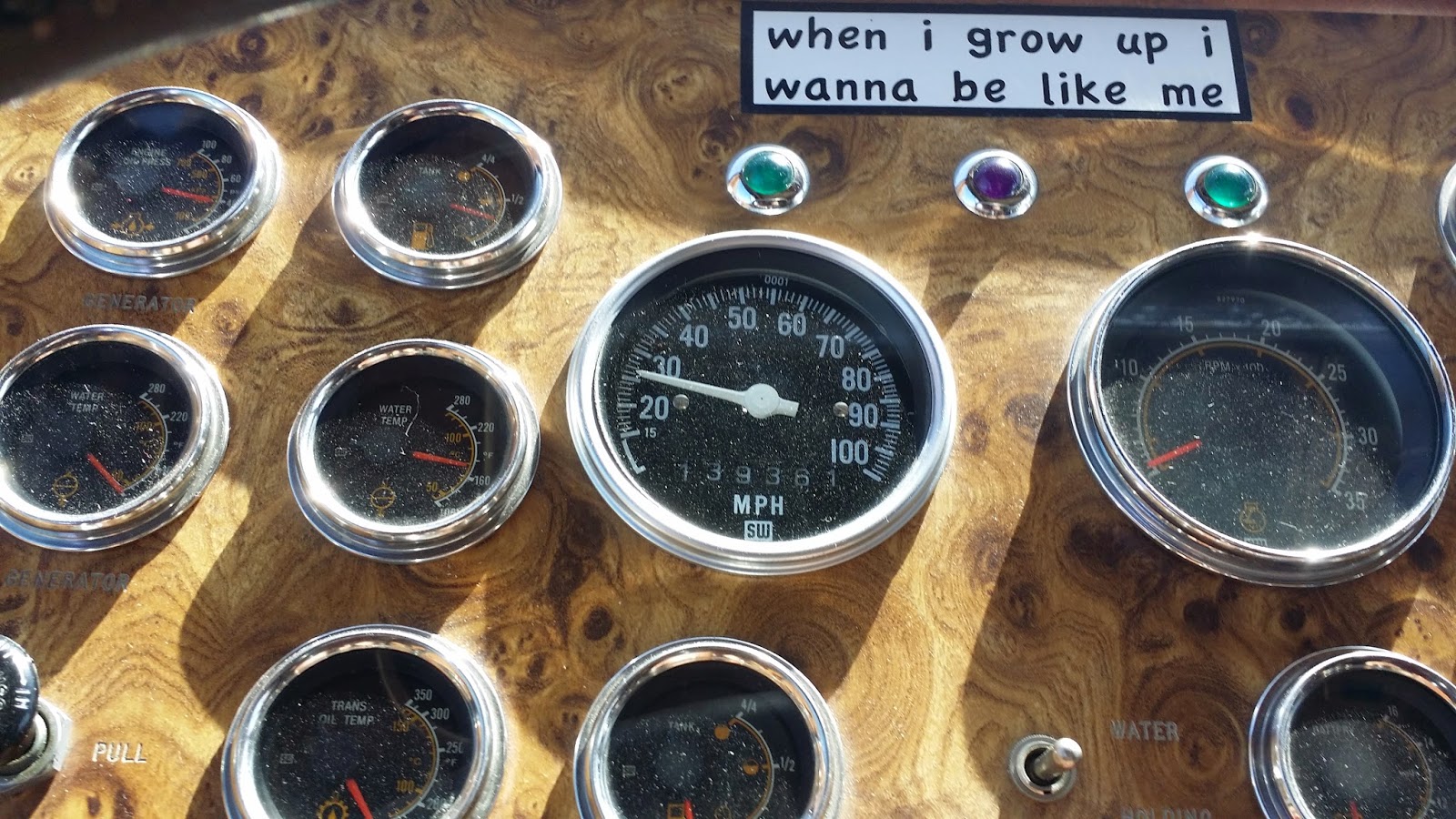 Our first stop of the day was Buckeye, just 30 some miles eastward where we stopped at a Fry's Fuel Station to fill up.....I figured we had around 1/3 of a tank left, or just over 60 gallons, so I figured we would need around 120 gallons, and we took on just 117 gallons at $2.39/gallon......that is the best price we have paid yet on our journeys.  The plunge in fuel prices since the fall to the present level means we saved over $140 over what we were paying just a year ago for the same amount of fuel!

As we merged on to Arizona 85 to connect to I-8 we hit the forecast headwinds, and that was pretty much the tail of the rest of our travel Sunday, but with a working cruise control all I had to worry about was steering the coach.

When we leave Yuma we will have just over 600 miles to Lake Tahoe, and we want to get there with about 1/2 tank left, so we decided to take advantage of another good diesel price in Yuma at another Fry's Fuel Station and topped off the tank with 22 gallons of diesel at $2.35/gallon!

From there it was just 15 more miles to McCoy's RV Park in Winterhaven.......just one mile over the California border, and just 8 miles from Los Algodones and our dental appointments on Monday.

We arrived at the park around 1:15, and after a slightly difficult time backing into our spot, were set up with the A/C going by 2.....we chose this park based on proximity to Los Algodones, and the fact they accept Passport America.....it is not a 5 star park.....maybe not even a 2 star park, but it has what we need for two nights.

We decided to head over to Prison Hill Brewing Company for dinner around 5:30.....we're calling it TLE's 'Last Supper'......Monday she goes 'under the knife' to have her dental implant installed, and won't be eating solid food for a few days.  You may recall that we visited here back in February when we came for our initial dental appointments.  We both ordered John Coffey Stout's.....OMG!  It was even more yummy than I remembered!  We ordered one appetizer (shrimp, onions, bell peppers, and sausage on a skewer) and their Bail Out BLT (I had this last time and loved it) and split them between us.  It was just the right amount of food! 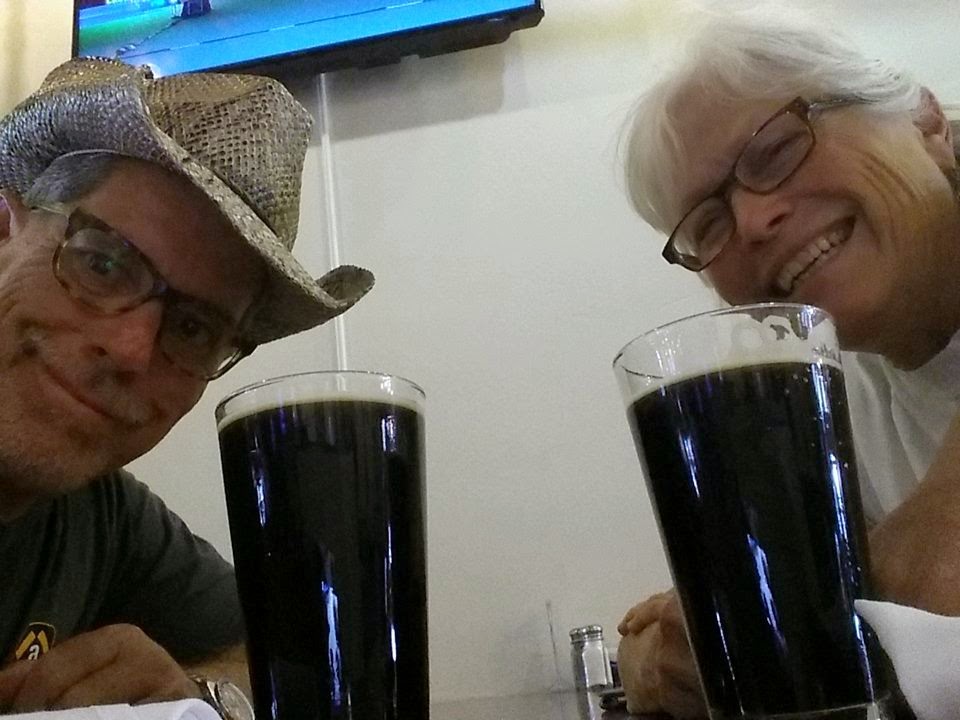 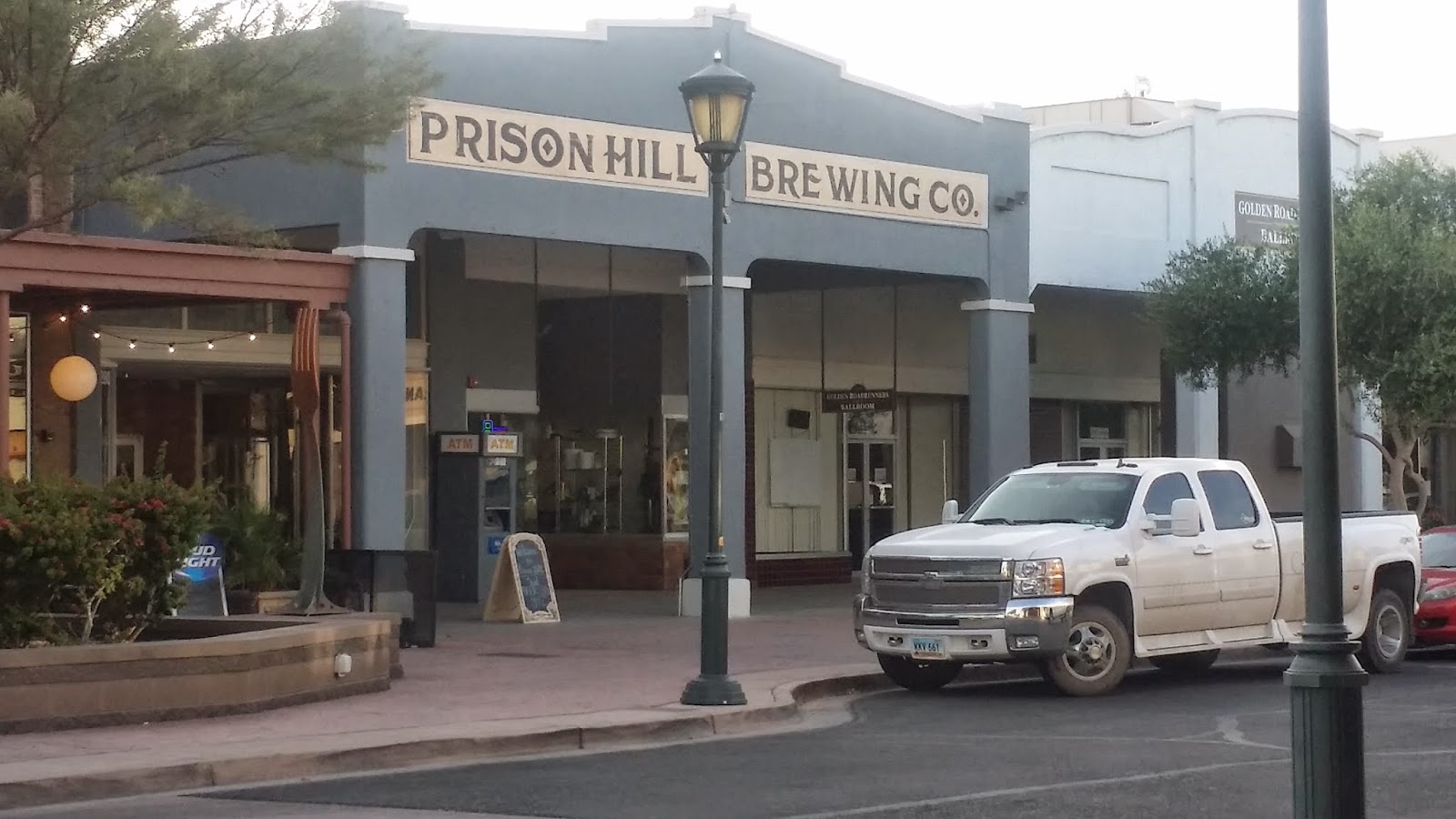 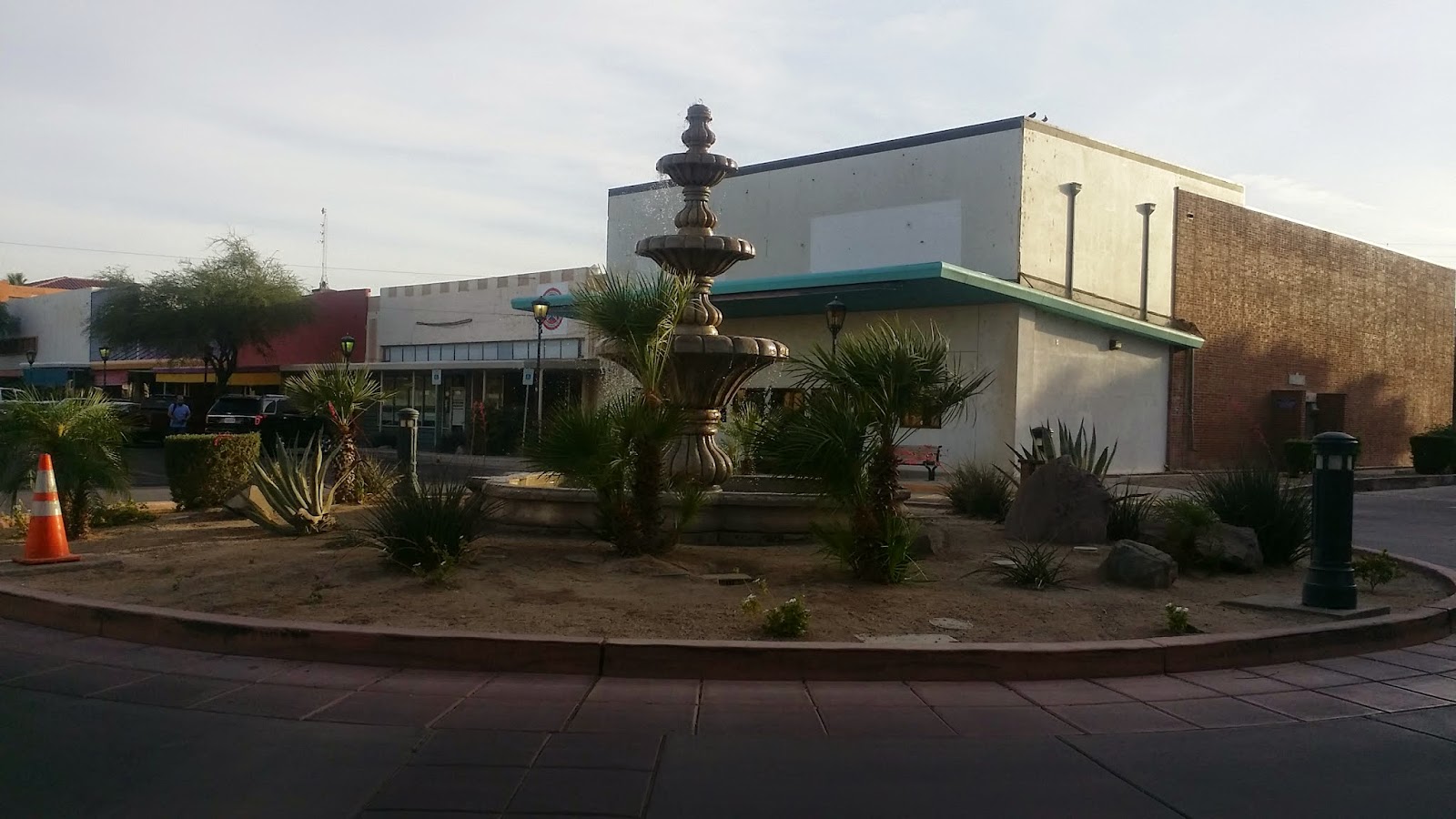 We were back 'home' by 6:40 and settled in for the night.......there were several good NBA games on Sunday, and I was able to watch the second half of the Clippers vs. Spurs in which the Clippers prevailed to even the series at 2-2.  In the last game of the day the Dallas Mavericks held on to defeat the Houston Rockets to avoid being swept.....will they win anymore games......I don't think so, but I've been wrong before. 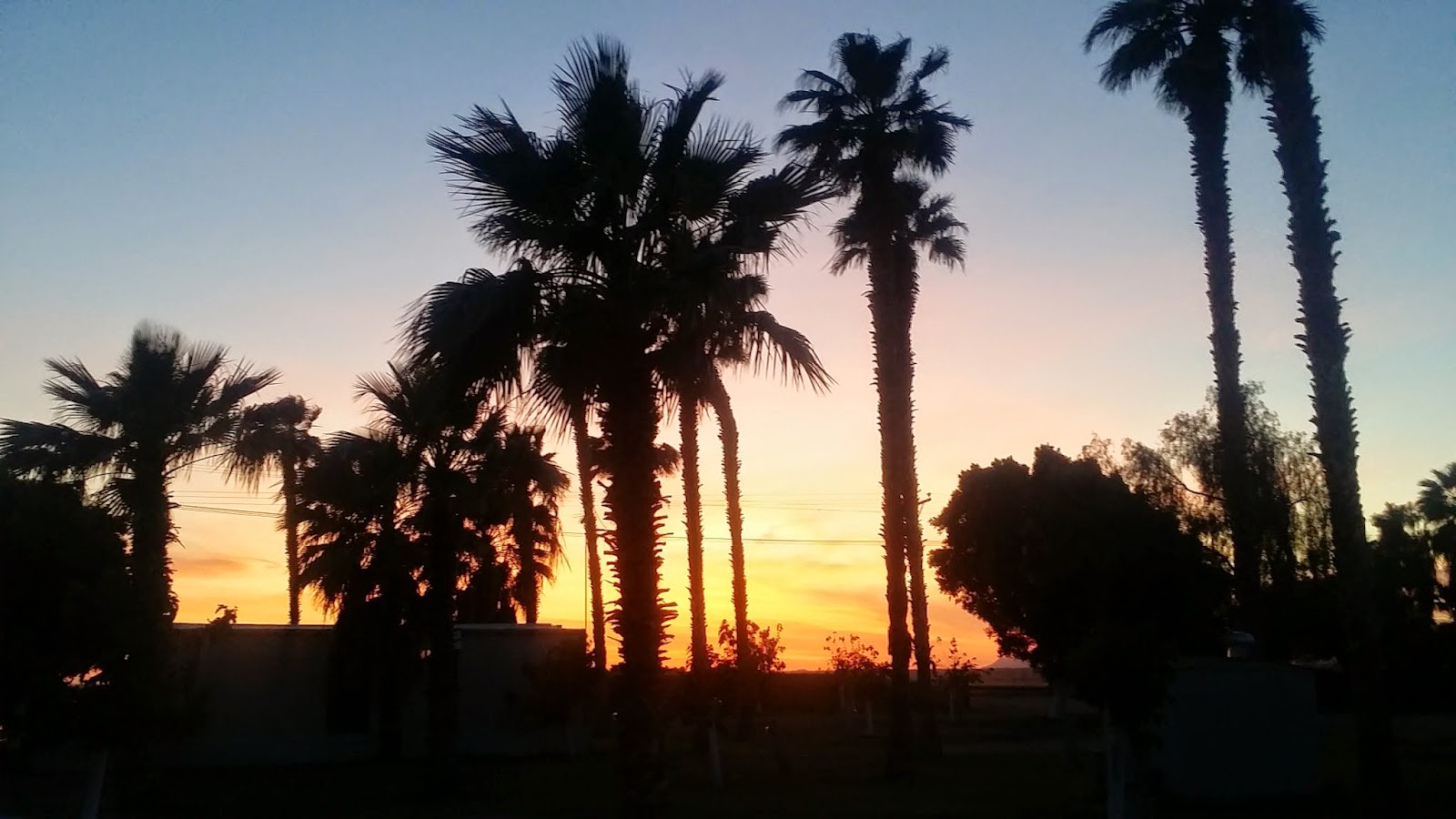 So, what is the moral of the story?  Don't worry, be happy.....everything's going to be all right!

Thanks for stopping by!
Posted by Whatsnewell at 7:11 AM