We have passed by the 'Four Corners Monument' entrance several times over the years, but have never opted to make the turn.  We had decided earlier in the week to make a day trip out of it and head over there on Friday........it's about a 150 mile loop....I like loops because that means you're not covering the same ground twice, and let's face it......you never get tired of the scenery.


The first 15 miles of Utah 162 is rough and uneven, and it was difficult traveling at anything over 55 mph.  After that it is easy driving for the most part, and we cruised at 70 mph much of the time.  As you travel you first cross from Utah into Colorado, then New Mexico, and finally Arizona when you enter the 'Monument'.  The 'Four Corners Monument' is operated by members of the Navaho Tribe....admission is $5/person.   For $5 you get a very rough, unpaved, hilly parking lot, access to pit toilets with doors that do not lock.....:-(.....and the 'Monument' itself.  I understand from friends that the marker here is about 1,800 feet away from the true intersection of the four state lines.  I guess the fascination for many, including myself, is that you can 'theoretically' go stand on a designated spot and be in four states at the same time. 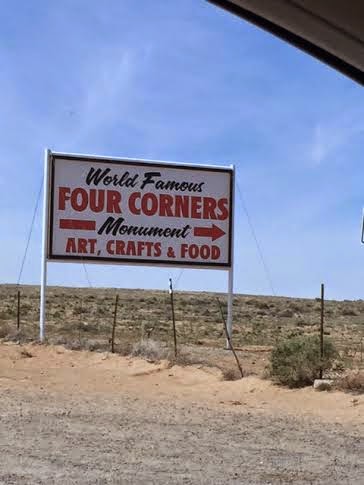 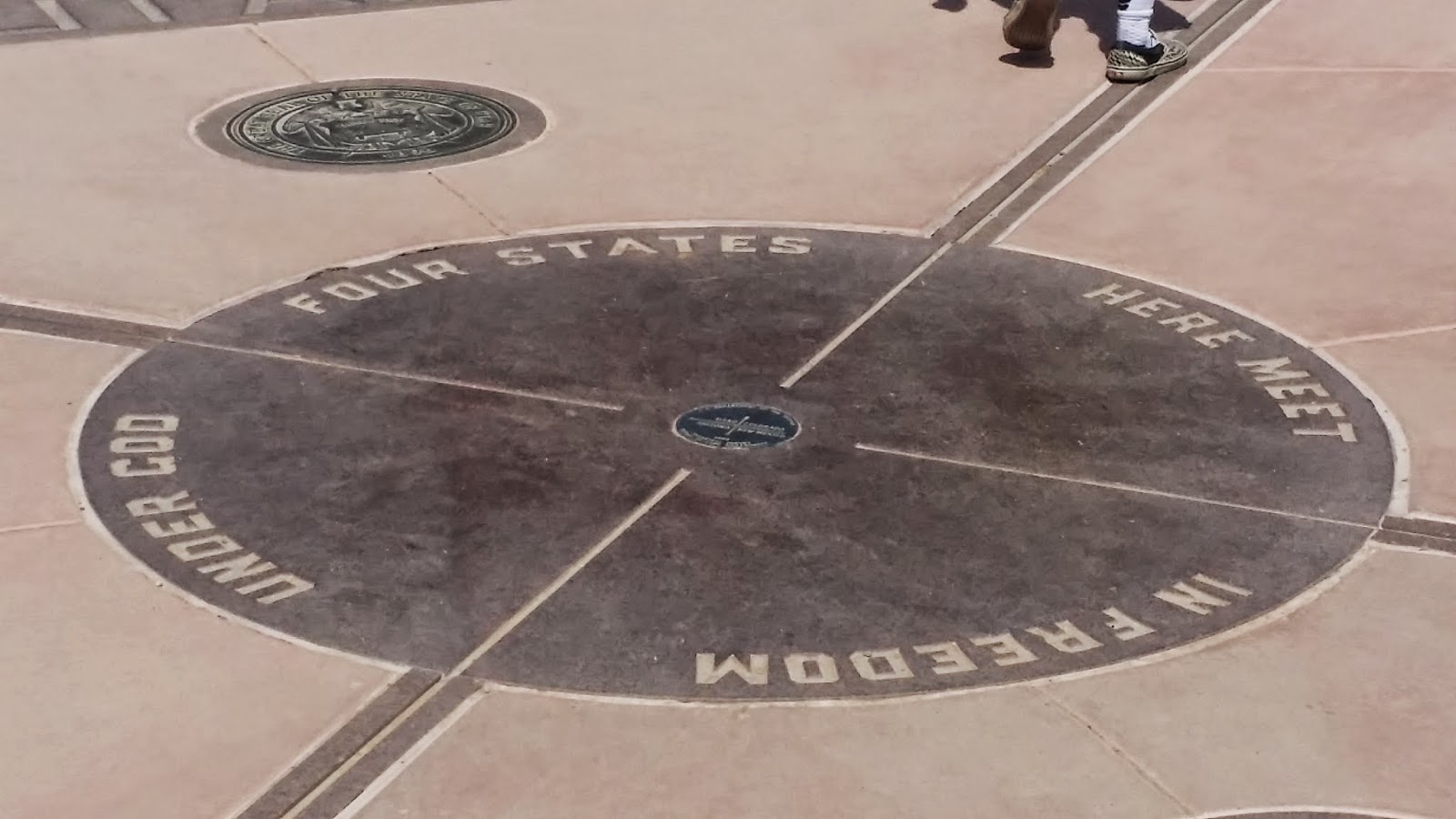 I like the message, but I'm wondering if this 'Monument' were being rebuilt today in 2015 if it would be allowed by those whose idea of 'tolerance' is a one way street. 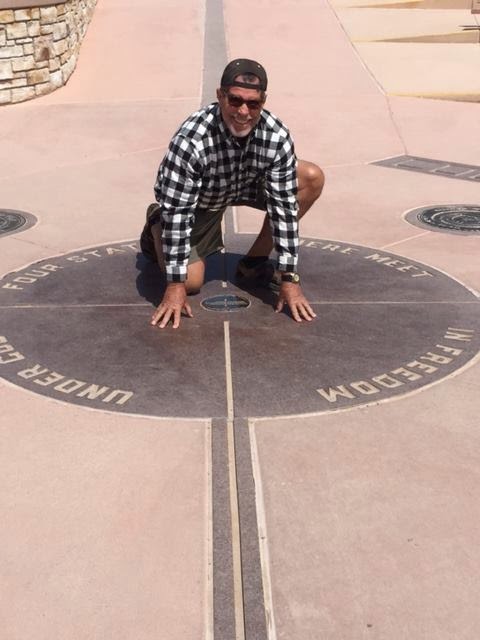 I have wanted to do this for a very long time.....one more thing off the 'bucket list' 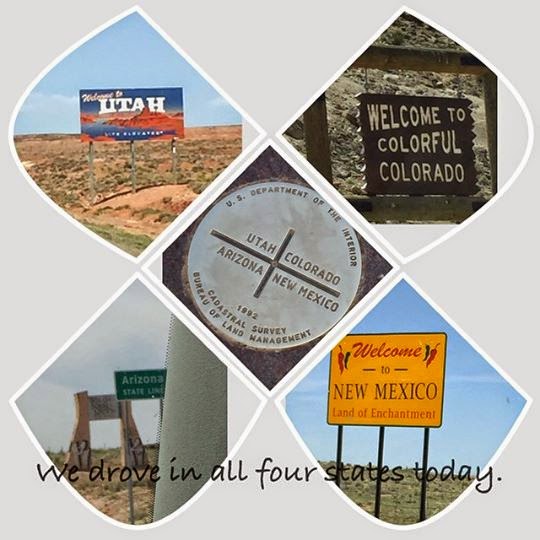 TLE put this collage together....she took a picture of each state sign as we drove the 'loop'. 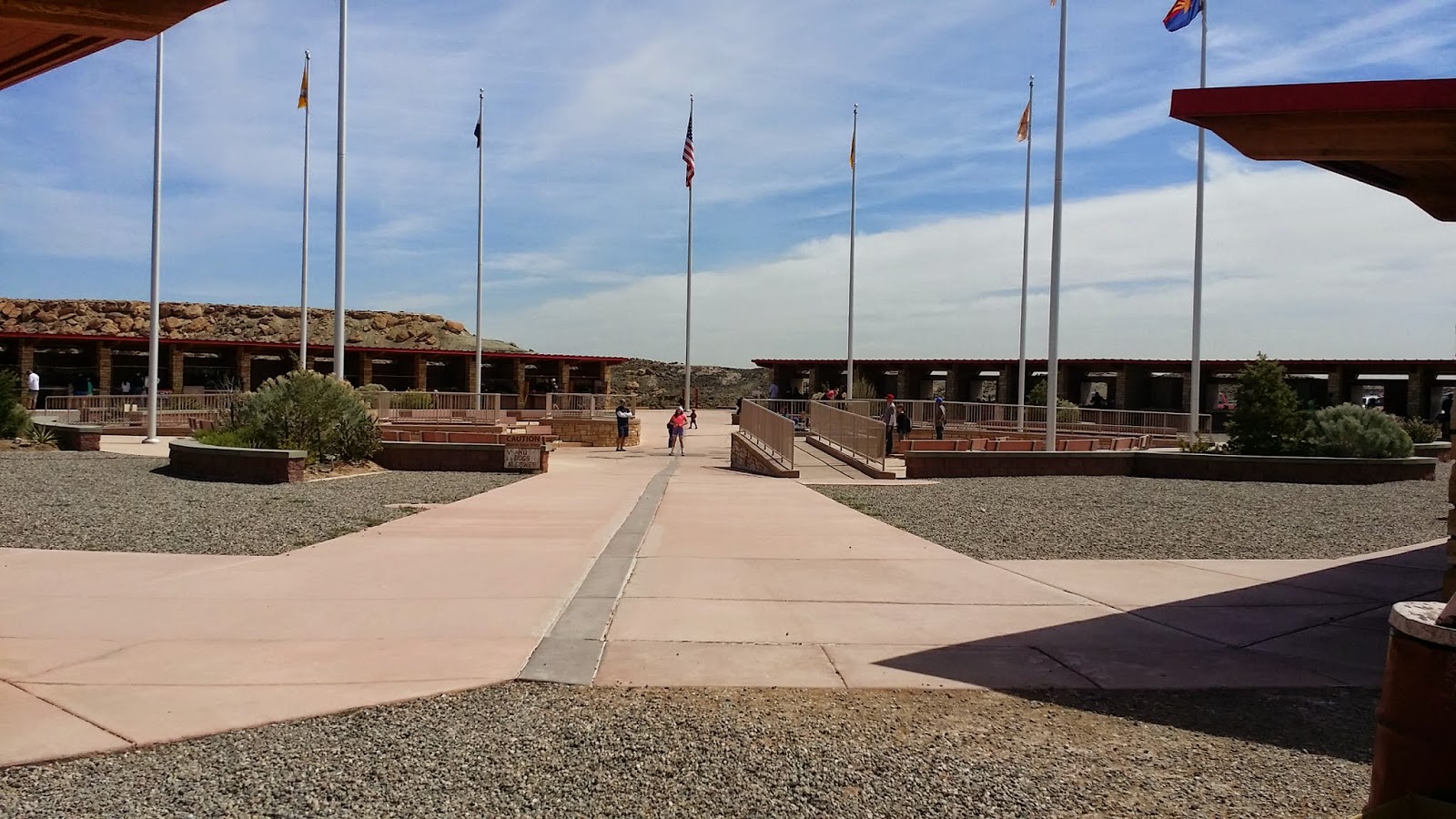 In 1992 the 'Monument' was modernized 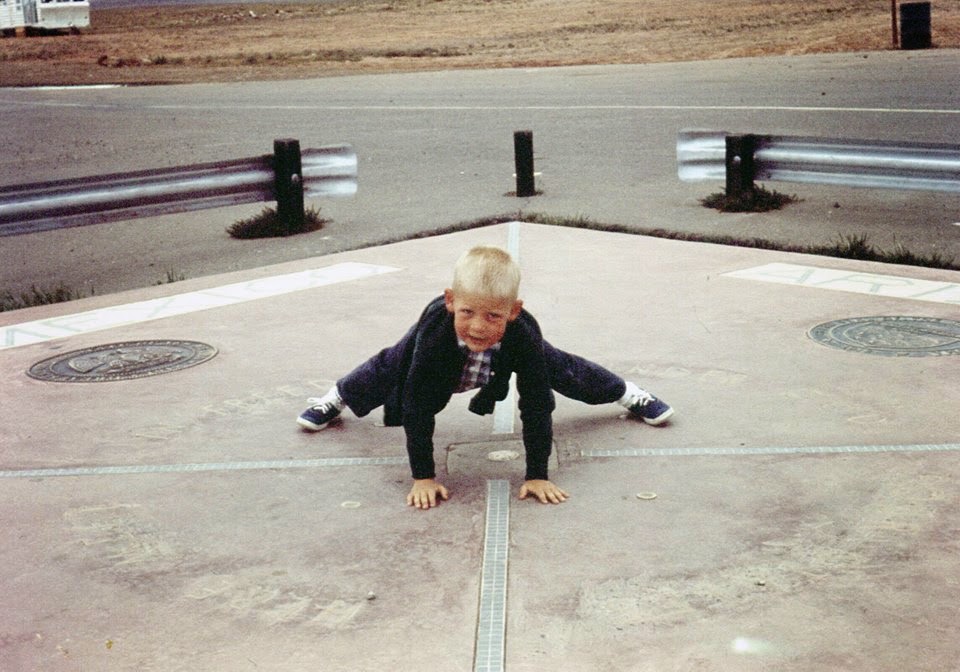 This picture dates from the 70's and was taken by good friend Don Neff....it was much more primitive back then.

I was able to scratch one more thing off my 'bucket list' and that was to have some 'Indian Frybread'......there were two little food shacks in the parking lot and one of them sold 'Navajo Tacos' on Indian Frybread.....how could I resist......and it was delicious....I added a little Tabasco for seasoning, and a Dr. Pepper chaser. 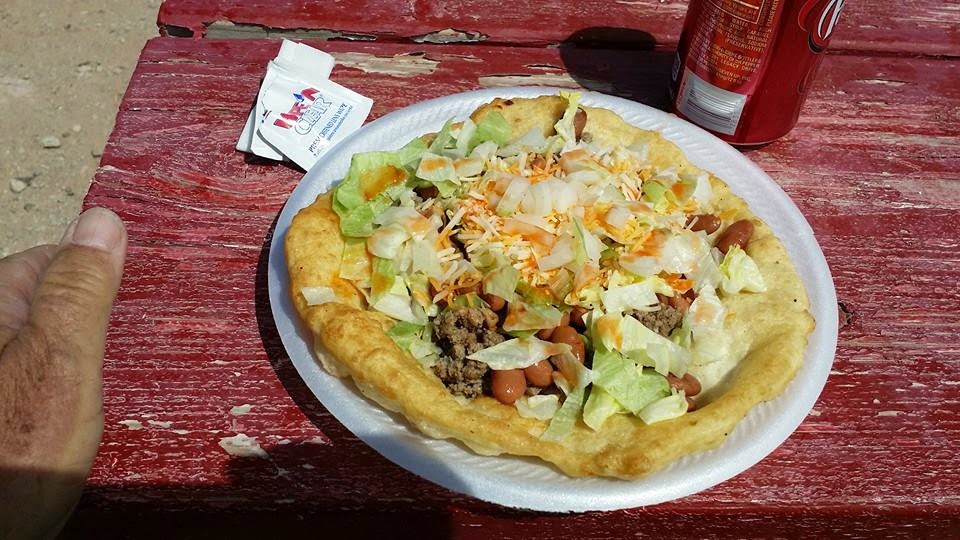 We were at the 'Monument' less than an hour (unless you want to browse through endless displays of native American jewelry, or eat Indian Frybread, there is nothing else to do) before continuing on with our day trip 'loop' (see map above)....heading west on U.S. 160, then north on U.S. 191 back to U.S. 163 (with a brief stop in Bluff to replenish our firewood supply) and home.  The scenery in this 'Four Corners' area is just breathtaking.

We were home before 2 pm to find our batteries had once again reached 100% in our absence.  I watched a couple hours of the 'Masters', then read until 5:30 when it was time to light the ritual evening fire.......TLE busied herself preparing 'wine cooler's for happy hour. 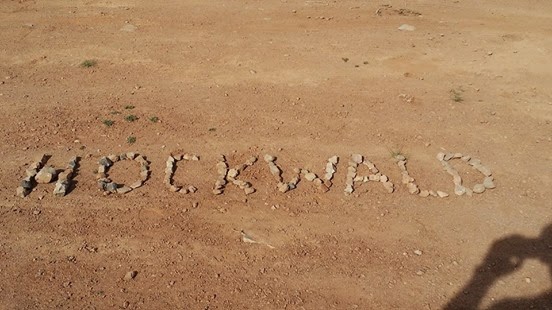 Someone may have too much time on their hands 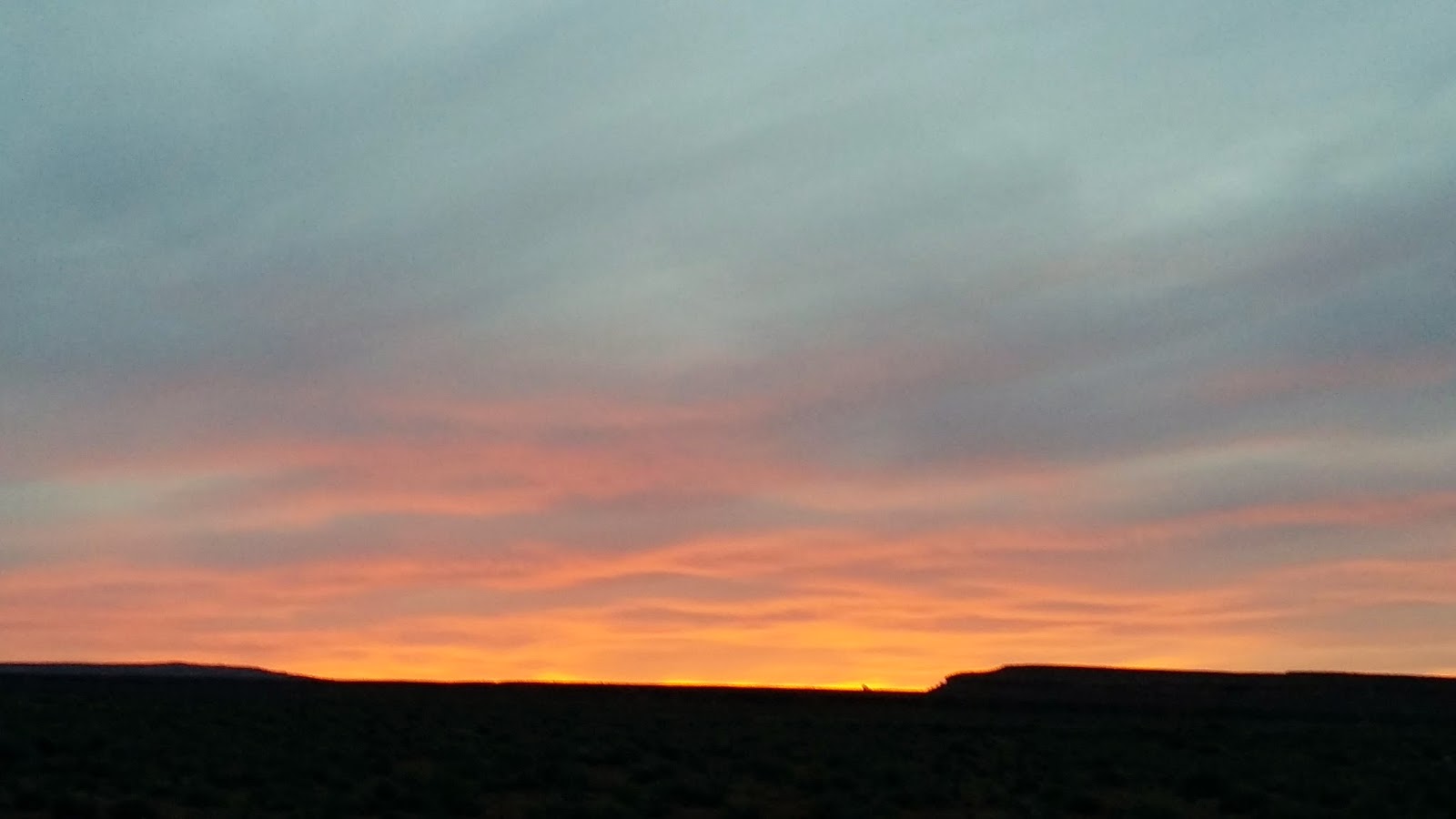 Street tacos where on the menu for Friday night so I was tasked with BBQ'ing the Pollo Asado......I cherished every single bite.....

Thanks for stopping by!
Posted by Whatsnewell at 8:38 AM