Saturday's first NCAAF game was the much awaited matchup between the Michigan Wolverines, and the Ohio State Buckeyes.....a great rivalry game which has been renewed well over 100 times....the first game between these two bitter rivals was in 1897.  This year's addition of 'The Game' was and will be a classic for years to come......it was won in the second overtime by Ohio State.  Michigan dominated much of the game, and if not for two terribly thrown balls by the Michigan quarterback, which resulted in 14 points scored by the Ohio State in the first 59 minutes of the game.....Ohio tied the game with seconds to go in regulation time on a field goal forcing the aforementioned overtime periods.

Next up was another annual rivalry game between the USC Trojans and the Notre Dame Fighting Irish.......this game will not be remembered as a classic as it was really over before the end of the first half, but if you are an USC fan like myself it was a great game won easily by the Trojans 45-27.  There were many other great games Saturday, but my brain is too fried right now to recount them. 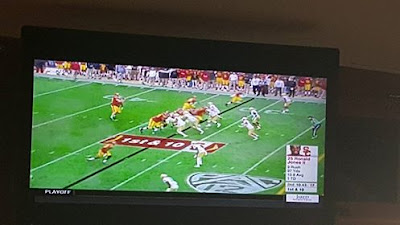 Trojans and Irish battling in the L.A. Coliseum

The biggest news of Saturday, however, was the rain that arrived with a ferocity around 2:30 pm accompanied by high winds forcing us to stow our patio awning for the first time in the over 3 weeks we have been here at the Fontana/Rialto Elks Club.  It rained continuously, hard at times, for 3, or 4 hours before petering out in the early evening hours.  By the time the last NCAAF game ended I had been watching college football for close to 12 hours.  I kept searching for any other game that might still be in progress, but alas there were no more offerings, and rivalry Saturday had come to an end.

We are now one week from liftoff for our five month odyssey which will see us traveling to the east coast, revisiting some places from our first year on the road, exploring new ones, meeting new people, and making new memories.  We will celebrate the beginning of our 6th year on the road while we are on the east coast, and the beginning of our 7th year living full time in our Newell.  We still have no idea when this part of our lives will end and the next phase will begin, but we will continue to live in the moment, and look expectantly for Miss Serendipity's hand as she 'stirs the pot'.