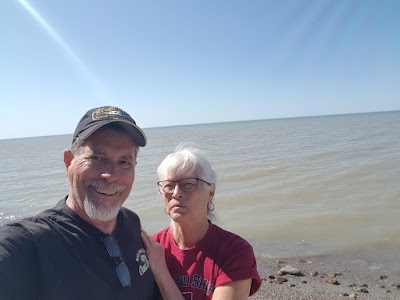 Lake Erie in the background 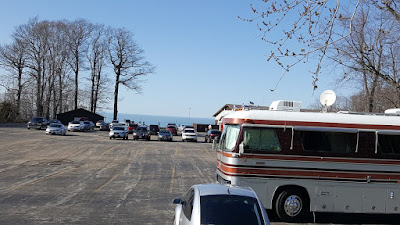 Thursday was a total bust as far as anything getting done successfully, or otherwise.  None of the parts for which we have been waiting over a week have arrived, and Glenn and Laureen's attempt to stop the very small air leak in the rear six pack ended up with multiple leaks in the end....to say the least it was a discouraging day. 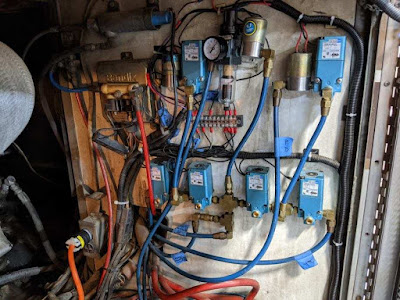 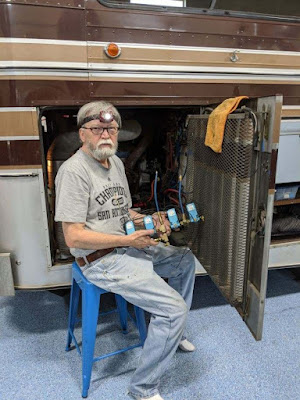 Where is that leak?

On a positive note, I did receive my new Elks Lodge membership card for 2020-21.......a full 15 days after it was mailed.....the USPS has really, really, really slowed down mail, and package delivery.  My son mailed a large envelope containing our mail to us April 23rd via first class mail, and it just arrived.....I could have ridden my bike to Rancho Cucamonga in that time and picked it up myself.  On the Elks membership card....I could have ridden there and back in the time it took them to deliver it.....what is the deal?  The USPS package containing the much needed tail lights has vanished somewhere within the system....the tracking showed it arriving April 30th, but late Thursday the tracking info completely disappeared from their system, and it says "We’re very sorry your delivery is late. Most late packages arrive in a day. If you have not received your package by May 6, you can come back here the next day for a refund, or replacement."....wait, what?

Our Jello plan to be in Flagstaff by Saturday, May 2nd seems to be circling the proverbial drain with increasing rapidity.  I know I shouldn't be so negative, but it is getting hot here in Wittmann, we are running our A/C 12-14 hours every day, and Arizona is still under 'stay at home' orders for another 2 weeks.  I ordered, and picked up another 3 dozen "pasture raised" eggs mid morning thinking it would be our last order....before the non-arrival of the tail lights.  We are supposed to received the flange gasket for the alternator Friday via FedEx....we'll see.  At least we do have tracking on that item, and it shows it arrived at their Phoenix facility around 2 pm Thursday.

It is becoming increasingly obvious to those of us who live in the western U.S. that we are being treated as if we live in New York, or New Jersey.  Arizona, which has had an extremely low case and death rate is still locked down for two more weeks.  The natives are getting restless, and I don't blame them.  World-wide there are just under 240,000 deaths reported from the Wuhan Virus, and just over 3 million confirmed cases.  In the U.S. anti-body tests being done across the nation find that over 25% of local populations have been infected at some point, which brings the death rate down to a paltry .01 to .05% of the population groups tested.  Is every death tragic?  Of course!  Is this 'pandemic' really cause for us to run around with our hair on fire, like the world is coming to an end.....no, it is not.  The cure seems to be far worse than the disease.  Back in early March when the decision was being made to lock our country down the 'experts' were telling our leaders that the number of deaths in the U.S. would exceed 2 million if we did nothing, 1 million if we shut everything down.  About 10 days later we were told it would be closer to 250,000 if we closed things down.  Then we were told it would be under 100,000.....total deaths in the U.S. as of today stand at 63,700....a lot for sure, but nothing compared to the statistics used to scare the hell out of our leaders, and us.  And yet, here were stand on April 30th.....6 weeks into this fiasco, and just 4, or 5 states are trying to reopen.....most subject to great ridicule by the 'Elites' who lecture us daily.  Virtually none of the orders being handed down by Governors are based on actual science.  According to PolitiFact Sweden, the only country not to shut down their economy, and punish their citizens with house arrest, has a death rate per capita of 150 per 1 million....a little higher than the U.S., which comes in at 118 per 1 million.  Their goal, with no lock down, was not to overwhelm their hospitals (also our initial goal with the lock down) was a success.  In short, we have wrecked our economy, destroyed livelihoods, businesses, etc. to save 32 people per 1 million.

Nevertheless, we continue to socially distance ourselves, and obey the civil authority.  We wore our face masks when we shopped at the local Family Dollar store Thursday. They had TP, paper towels, and Kleenex, so things are getting back to normal.  We had a nice sunset..... 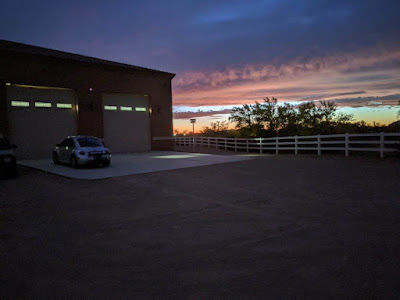 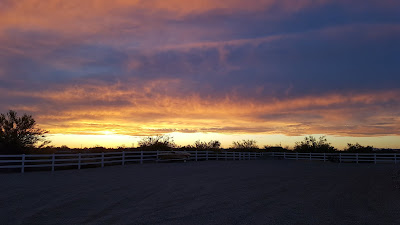 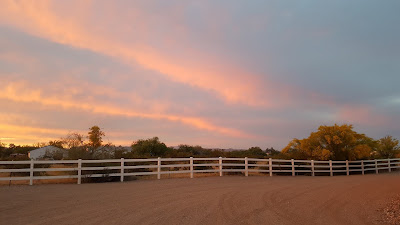 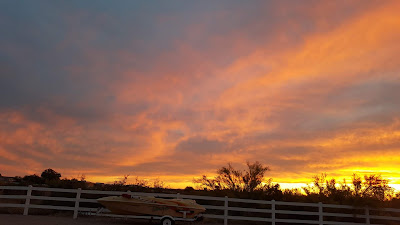 ......Glenn and Laureen snapped this cool picture of our coach just after the sun set..... 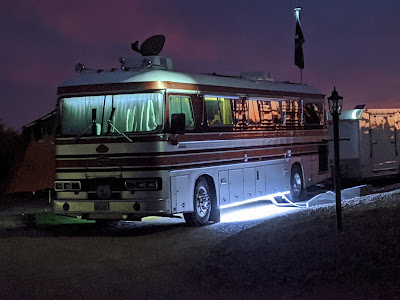 ....time to roll our wheels!  Thanks for stopping by!


When you shop Amazon, please use our link (below) to access their website.......we will appreciate every purchase you make using our Amazon Affiliate link, and  remember, using our link will not add one penny to your purchase, plus we will receive a small commission which over the course of a year adds up to enough to by a tank of diesel for which we thank you very much!
Posted by Whatsnewell at 8:27 AM