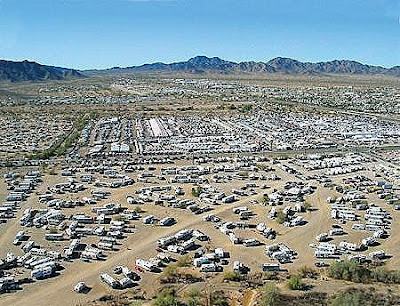 An aerial shot of just a small section of Quartzite....it is estimated that up to 1 million people visit here each year in their RV's
Thursday we had light winds out of the east which means lower humidity, and warmer weather.....that is what we got.  The clarity in the air was the best in weeks, and the temp climbed all the way to 56° F....by and far the nicest day we have had in a while.
I met Blake at the golf cart shack at 10 am, and we proceeded up to the tool shed to retrieve the long pole chain saw, and the hand held chainsaw. Our task for the day?  Remove another tree limb from a tree which borders site # 39.  The high winds we experienced a few days ago had broken the limb, but it was still hanging by a thread, so to speak.  In all it took us around 1.5 hours to accomplish that task, and completely filled the trailer with the debris.  We then we closed the two hour shift out by covering the burn pile with two tarps to keep it as dry as possible in anticipation of burning it sometime early next week.  I met TLE the office, and we walked home together a little after 12 pm.
We've had a slight change in plans.  We are under contract to work at Seal Rocks RV Cove until the end of March, at which time we had planned to put a couple thousand miles on the coach by heading down to Arizona to pick up TLE's new recliner, get our alternator rebuilt, install some new steer tires, and get the coach serviced after which we would return to SRRVC to work the summer months.  That is still the Jell-O plan, but the timeline has moved up a little.  Our departure date for heading south for a month is now February 12th.
It's funny, if you think about it.  I was just starting to get a little 'hitch itch', and began day dreaming about being on the road again, but realizing it would be just under two months until that was reality made me a little sad, but now we are due to do just that in less than 4 weeks......6 weeks early.  I'm already beginning to plan our travel route!
To cap off our delightful day we watched the last 7 episodes of season 3 of 'Flash', and we have 4 more seasons to go.  It began raining again around 10 pm, and it continued raining all night long.  As I write it has stopped raining, and we should see some blue sky in the next few hours.....YAY for us!
Thanks for stopping by!
When you shop Amazon, please use our link (below) to access their website.......we will appreciate every purchase you make using our Amazon Affiliate link, and  remember, using our link will not add one penny to your purchase, plus we will receive a small commission which over the course of a year adds up to enough to by a tank of diesel for which we thank you very much!

Posted by Whatsnewell at 8:23 AM