All systems are go, but confidence is not so high...... 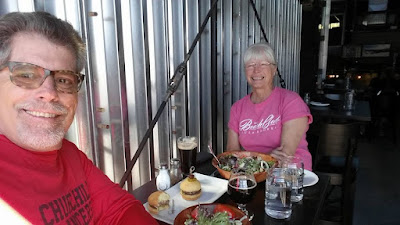 Every story must have an ending, and for me Monday was the end of the 8 day saga to get Bob's John Deere 830B running again.  I would either succeed, or slink away in draped in failure like all the others before me.  All the preparations had been completed, and it was just a matter of pouring a couple of gallons of diesel into the empty tank, priming the fuel delivery system, and then pushing that 'START' button to see if she would start, and run.  As I walked down the hill to the 18 month home of the JD I felt like there was a 50/50 chance she would start, and then continue to run.  I've never done anything like this before, and knowing Bob had already spent several thousand dollars in parts and labor (professional labor I might add) trying to do just that was a little intimidating to me.
There are really just two things you need for a strictly mechanical diesel engine to start, and run....compression, and fuel.  We removed all the bad diesel from the tank early last week (13 gallons of water spoiled diesel), and we knew the fuel lines were clear.  The compression is still quite good on this 1975 tractor so we had all the elements for success, but others had thought the same, and failed.  As I was pouring in the last of 2 gallons of diesel TLE came walking down the hill so I asked her to get up on the tractor and push the 'START' button to move fuel from the tank to the fuel pump, then through the fuel filter, and ultimately to the injector pump.  I 'cracked' each of the lines in their order to allow air to escape the system, and then closed them when fuel began to leak out of the fittings.
All that now remained was to connect battery power to the injector pump solenoid, and have TLE push the 'START' button.....
Just after the successful start
....it took a few seconds as fuel passed successfully through the open solenoid in the injector pump up to the injectors and into the individual cylinders.  Soon white smoke began to emerge from the exhaust, and then suddenly she fired.....and continued to run for the first time in 18 months!!!
TLE and I were yelling so loud Bob and Karen could hear us up in their home office.  We shut her down, and restarted her several times to be sure all was well, and shut her down a final time so I could install a new trigger wire from the ignition to the injector pump solenoid.  That took about 15 minutes, and then it was time to move her back up the hill to the barn.....

The new red trigger wire attached to the solenoid

The new red wire attached on the other end to the ignition
Had to back the JD all the way up the hill as the backhoe attachment makes it too heavy in back to drive forward up the very steep hill...the front end will literally come off the ground
.....the JD 830B tends to be back heavy due to the large backhoe attachment.  Bob's property runs down a long hill to Harrington Lagoon, so the path up to the JD's next resting spot is quit steep making it necessary to drive the JD backwards up the hill.  If you attempt to drive forward up the hill the front end will literally come off the ground....so back it I did.

Her former resting place for the past 18 months

New resting place for the John Deer 830B...we've got a battery charger hooked up to her two in series 6 volt batteries to keep them topped off
...after getting her parked in her new spot I proceeded to check all of the backhoe functions to be sure they still worked, and they did.  Bob had all the hydraulic hoses replaced a couple of years ago, so we were pretty sure there would be no blown lines.... 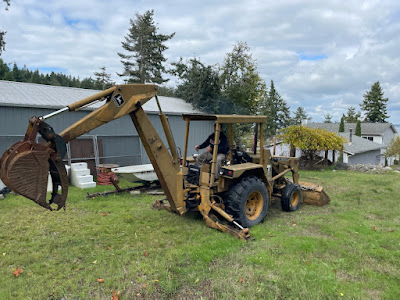 Making sure the backhoe functions work ......around 4 pm TLE and I decided to do a re-enactment of what it might have looked like if I was on the seat of the JD when it started......
The Re-enactment
....I was pretty much just as excited as the first time it started a few hours earlier.
To say the very least, Monday was a high point for me.  TLE and I returned to Bob and Karen's after almost 13 months primarily to help them get the JD 830B running again.  Bob has a lot of work he wants to do on their property, and it has all been on hold until the tractor was running again.  I had no idea if I would be successful, and was less than confident as I walked down the hill early Monday morning, but all that changed in the wink of an eye.  All the self doubt quickly faded away as the JD 830B rumbled to life once again.
Thanks for stopping by!
When you shop Amazon, please use our link (below) to access their website.......we will appreciate every purchase you make using our Amazon Affiliate link, and  remember, using our link will not add one penny to your purchase, plus we will receive a small commission which over the course of a year adds up to enough to by a tank of diesel for which we thank you very much!
Posted by Whatsnewell at 9:34 AM