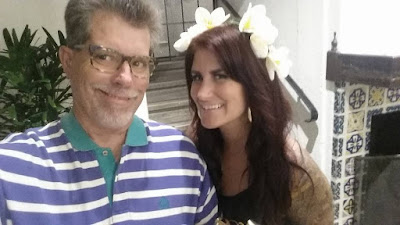 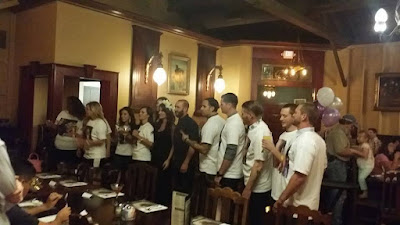 We awoke Friday morning to more overcast skies, and temps in the high 30's....not much different than Coupeville.  We have never spent the night in a Rest Area, and our first experience was mixed.  We should have taken more care to park on either end of the parking area to be sure there would be only one truck, or RV next to us, but we parked in the middle.  We did get an RV spending the night on our passenger side, and throughout the early evening trucks came and went on our passenger side, but then around 8 pm a semi truck pulled in with a refrigerated trailer, and the refrigeration unit was running.  We hoped he would be there for a few hours, but we were wrong....he was there all night long, and didn't leave until 6:20 am.....ask me now I know.  Needless to say, it was very loud all night, and neither of us slept well.  Oh well, live and learn.
Our destination for Friday was an ambitious one.....Pendleton, OR.  The estimated mileage for the day would be 206 miles.....the most we have driven the Newell in one day since last February and March on our one month vacation from Seal Rocks RV Cove.  We took a walk around the Rest Area before merging back onto I-90 eastbound.  Much to our surprise we saw an ad for the Elks on their local billboard, and a picture of our Newell.  I took a picture of the billboard with our Newell in the background.  As it turns out, this is the same Rest Area my brother-in-law, Glenn Parker, stopped at last summer.  He also saw the Elks ad, and sent me a picture of it. Somehow, unwittingly,  we managed to stop in the same exact Rest Area....what are the odds?

There she is....Elks Lodge, Lompoc, CA
We were on the road just before 10 am, and within 20 miles we left I-90 for I-82 which would take us to I-84 and Pendleton, OR.  Within minutes of leaving I-90 the landscape became much more arid, and the vegetation was that of high desert...... 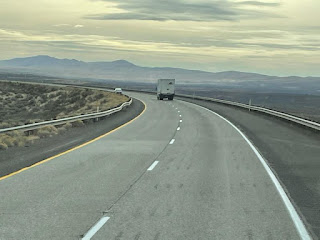 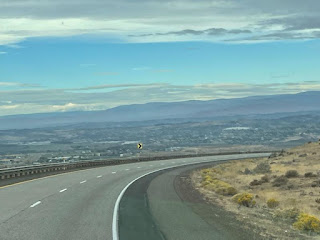 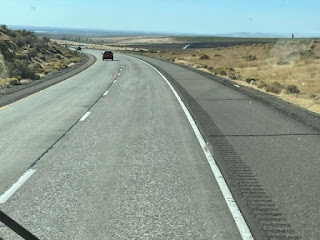 .....we stopped at several Rest Areas throughout the day, and one of them happened to be near a Starbucks, so we walked over and bought a couple of Frappuccinos.....Mocha for moi, and Vanilla Bean for TLE....haven't had one of those for way too long!
Around 2 pm we crossed over the Columbia River back into Oregon, and within 10 minutes merged onto I-84 where we had just 36 miles to our destination.....Wildhorse Casino just 5 miles east of Pendelton, OR.... 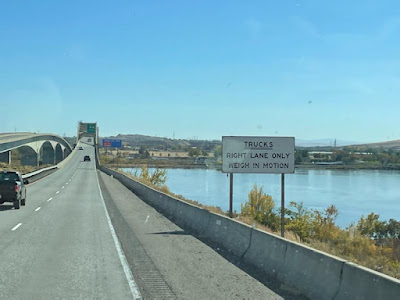 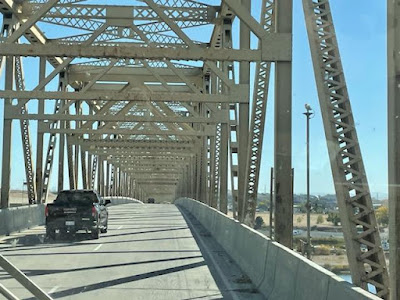 ......Wildhorse offers both dry camping area right in front of the Casino, and an RV park back behind the Casino.   We had not yet decided in which we would stay until we arrived.  When we saw how crowded the dry camping area was we opted for the much quieter RV park option.  As has often been the case over the almost 10 years of travel, we arrived without reservations, and we were able to snag one of the few remaining back in spots, which just happened to be 62' long.....

.....when backing into diagonal spots like this I am totally blind, and am completely in the hands of TLE for direction as I back.  The gravel pads for these back in sites are quite narrow, but TLE got me into the site in one try.....I'm not kidding!  Beginning to end it took less than 2 minutes to get into this site.
We spent a QUIET evening watching the Boston Red Sox play the Houston Astros in the first game of the American League Championship Series, won by Houston 5-4.  It was so blissfully quiet I slept for 6 hours straight before I turned over!
We'll be leaving our current location in about an hour, so time to get ready to roll....thanks for stopping by!
When you shop Amazon, please use our link (below) to access their website.......we will appreciate every purchase you make using our Amazon Affiliate link, and  remember, using our link will not add one penny to your purchase, plus we will receive a small commission which over the course of a year adds up to enough to by a tank of diesel for which we thank you very much!
Posted by Whatsnewell at 9:01 AM