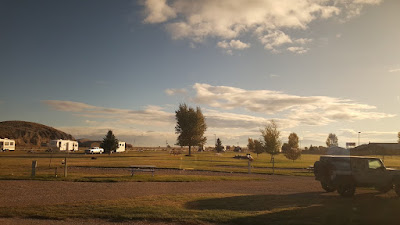 Sunday began heavily overcast, and blustery, and just as I was walking down the hill to the JD 830B tractor to install the new fuel filter assembly, and the brass cap on the brass 'T' at the bottom of the fuel tank it began to sprinkle.  It never really rained, and I managed to continue working until the sun arrived, and the clouds began to disappear.....

The new filter, and bowl

The brass cap reinstalled sans petcock valve...had to solder the hole in the cap
....now that the fuel filter has been installed, and the brass cap has been returned to its original position sans the petcock valve we can pour diesel into the fuel tank once again, and reprime the fuel system.  After that we will see if we can get her to run for more than 2 seconds.
A little discussion about the 'brass cap' is in order.....we have determined the petcock valve attached to the brass 'T' was, indeed, not a petcock valve, but a fuel shutoff valve instead.  By turning it to the 'OFF' position one could detach the fuel line on the left side of the 'T' without spilling fuel.  We intended to reinstall it, but the threads on the valve part which are supposed to screw into the 'T' were slightly damaged in the removal, and it would not go back into the 'T' so we went to plan 'B'.  Plan 'B' was to go to Home Depot and buy a brass cap to just close off the right side of the 'T', but none of the three types of brass caps (compression, flair, brass pipe) we purchased would thread onto the 'T'....doh!  Okay, here comes plan 'C'.  Plan 'C' was to cut off a piece of the brass rod on the petcock valve, and insert it into the hole in the end of the old brass cap.  There is a rubber bushing which surrounds the rod thereby keeping fuel from leaking past it. I then soldered up the hole in the brass cap to seal it.  Installation took just a few minutes.  We'll see if it leaks...I'm pretty sure it will not.
As I have written previously, we have determined the trigger wire which runs to the injector pump fuel shutoff solenoid is not working, but we have jumped a wire from the battery to the solenoid and it does work, and we have also jumped power from the battery to the wire terminal on the back of the ignition to which the trigger wire is attached and gotten the solenoid to work, so the trigger wire is good, therefore the ignition switch is not sending a signal to the trigger wire for some reason, however, it doe send a signal to the starter button, and it works as it should.......

The ignition and push button start

The back of the ignition switch....when the key is turned on power should flow from the 'HOT POST' to the 'TRIGGER' wire post, but it does not
......in order to start the JD 830B we will send power directly to the fuel shutoff solenoid from the battery at startup.  If we are correct, and the problem has been the failure of the solenoid to 'OPEN' and allow fuel up to the injectors the JD 830B should start, and continue to run as long as power is supplied to the solenoid.
By the time I finished  with my tasks Bob had not yet returned with fresh diesel, so I called it a day, and determined that Monday would be the day we gather en masse around the JD 830B to start her for the first time in 18 months....fingers crossed....lol!
Thanks for stopping by!
When you shop Amazon, please use our link (below) to access their website.......we will appreciate every purchase you make using our Amazon Affiliate link, and  remember, using our link will not add one penny to your purchase, plus we will receive a small commission which over the course of a year adds up to enough to by a tank of diesel for which we thank you very much!
Posted by Whatsnewell at 9:25 AM