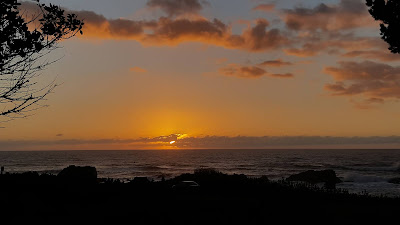 I originally thought we had only 163 miles to drive Saturday, but I was off by 25 miles.....our Garmin Trucker informed me when I input our destination Saturday morning that it was, indeed, 188 miles.  As a result we decided to get an early start, and were rolling our wheels out of the long back in site at Boulder Creek RV Resort by 8:20 am.  In the VW we could cover that distance in 3 hours, but in the Newell plugging along at 60 mph, or slower if we are climbing, it takes at least 4 hours with no stops.  You know there are going to be stops.....at least two, and maybe three.
At any rate, we were cruising along at 60 mph just south of Olancha, CA when I happened to glance down at the two air pressure gauges on our dashboard and noticed the air pressure was down to 110 PSI, and falling.  Normally both gauges just sit there at 120 PSI like clockwork  unless I have used the air brakes, but I had not used them since we merged onto US-395 30 minutes before.  As I kept watch on the falling gauge needles my mind began to go through the possible scenarios for what was wrong......was one of my air bags leaking, or one of the two six packs, a broken air line, a malfunctioning compressor, or regulator.....all of which are complicated repairs as parts would take days to reach us.  My mind always goes to the worse case scenario even though I know most of the time it is something simple.
I didn't say anything to TLE initially, but when I saw the next Rest Area was just 4 more miles I told her what I was observing, and what might be the problem(s).  She always remains calm when I give her bad news, and this time was no exception.  By this time the PSI was down to 105, which is not really the danger zone......60 PSI is the danger zone.....if the pressure gets too low the air brakes will lock up brining us to a complete stop, and you don't want that to happen in the middle of the highway, right?
As we came to the left hand turn lane to turn into the Coso Station Rest Area the pressure dropped to 100 PSI......as we exited the highway in low gear I noticed the pressure began to recover, and by the time we parked in one of the pull through spots it was near 120 PSI....whew!  An audible sigh of relief  escaped my lips, and TLE broke out in a smile.  By the time I shut the big Detroit Diesel down the air pressure was reading just over 120 PSI again.  So what happened?  Obviously there could be no leak anywhere because the air pressure recovered while we were sitting there idling at 500 RPM, which means the mechanical pump is turning more slowly. If there was a leak anywhere that would not be enough to overcome the leak.  So, why did the air pressure suddenly build again, and everything return to normal?  I have no idea, but this same thing happened last March on our return trip to Oregon from our one month vacation.  Just outside of Yuma, AZ the same thing happened, but for some reason I interpreted it differently.  The air pressure would drop to just above 100 PSI over 20 miles, then suddenly it would build back to 120 PSI.  This scenario repeated over and over again for the next 150 miles, and then suddenly stopped for the next almost 2,500 miles.....maybe this was a repeat of that?
After calming down for a few minutes, and after I completed a walk around the coach listening for obvious air leaks, we resumed our journey south on US-395, and once again after a couple of miles the air pressure began began to fall over the next 20 miles.  I still wasn't sure what was going on, but wasn't freaked out about it this time.  As the pressure neared 100 PSI again we pulled off the highway at the Shell fuel station in Personville, CA where the same scenario unfolded....as we idled the air pressure recovered.  This was when I remembered what had happened last March, so as we edged back onto US-395 I determined to let the scenario play out without pulling off the highway, and sure enough over the next 100 miles it repeated itself 5, or 6 times, then suddenly stopped between Ridgecrest and Kramer Junction, and did not return again the rest of the drive.....the air pressure remained steady at 120 PSI, and every time we would bleed off pressure by engaging the air brakes it would quickly return to 120 PSI.
Other than that the drive to SoCal was completely uneventful as we quickly devoured mile after mile of US-395 stretching off into the distance..... 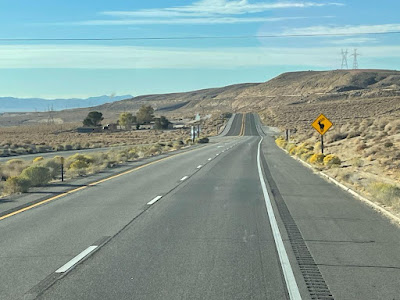 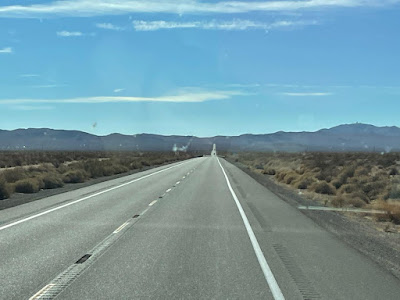 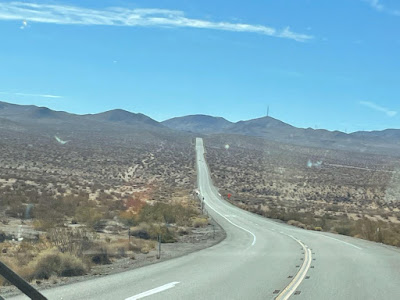 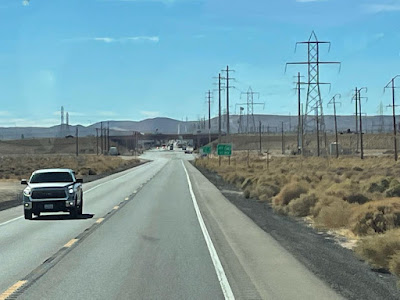 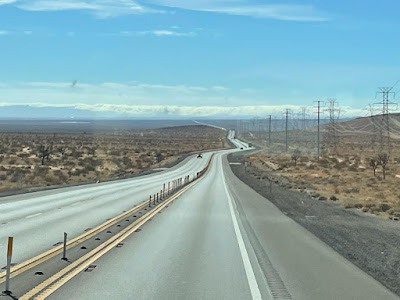 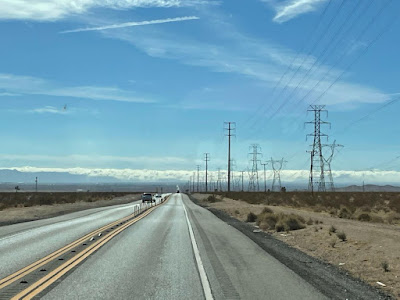 Approaching Adelanto, CA and Cajon Pass....you can see the massive cloud bank hovering over the San Bernardino Mountains in the distance 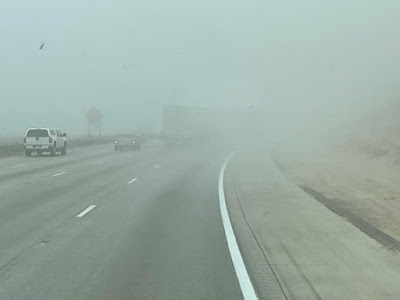 Just as we began the 8 miles of 6% downhill gradient into the Pomona Valley....a little foggy to say the least.  It disappeared after we dropped a few hundred feet in elevation
.....we arrived at the Fontana/Rialto Elks Lodge just before 1 pm, and after removing the Beetle, and the artificial turf we were backed into our site for the next month by 1:30 pm.
So, what caused a repeat of the loss of air pressure scenario from last March?  I still have no idea, but I am going to have the mechanical compressor inspected, as as well as the air pressure regulator.  I can hear no leaks anywhere in the air system, and as I sit here typing the air pressure on both gauges sits at 120 PSI after sitting here for 18 hours, which is what I would expect.
Thanks for stopping by!
When you shop Amazon, please use our link (below) to access their website.......we will appreciate every purchase you make using our Amazon Affiliate link, and  remember, using our link will not add one penny to your purchase, plus we will receive a small commission which over the course of a year adds up to enough to by a tank of diesel for which we thank you very much!

Posted by Whatsnewell at 8:47 AM