We expected to be driving in rain on our way into Indianapolis, and the Indianapolis Motor Speedway, and as we left the Cracker Barrel around 10 am it seemed certain it would be that way, because it was raining as we merged on to I-70 west bound........I am so happy to be going west again.

Within a few minutes, though, the rain stopped completely.  If only the road surface had been as nice as the weather turned out!  Since we've crossed the border into Indiana the I-70 road surface has been awful 50% of the time....in some cases bone jarring rough.  Fortunately we only had 89 miles to go.

I forgot to mention that, but just before we left Richmond I called Fred, who is the gate watchman at the campground for "workampers at the IMS (Indianapolis Motor Speedway).  The campground is just on the north end of the IMS in a large grass field.  We needed to find out what accommodations we might expect when we arrived. Fred advised we would have 30 amp electric, but no sewer, or water connection.  There is a dump station on premises, and there are several hose bibs within reach of a couple of long hoses.  Additionally, a "honey wagon" comes in once a week to empty gray and black tanks if you are willing to pay for it....we will see.  At any rate, with this news we decided to stop at a Flying J just 34 miles west of Richmond so we might dump our tanks and fill up with propane.  We have used a lot of propane in the last 7 weeks since we have been dry camping so much, and when the small Honda broke down we used the on board generator a lot when it was raining.  So we dumped our tanks and then took on 41 gallons of propane at $2.99/gallon.  Usually when we are plugged in a 48 gallon tank of propane will last us as long as 6 months.

The rest of the drive to the IMS was uneventful, and free of rain.....I think a better name for weather forecasters is "weather guessers" (as my good friend John Dickerson calls them).  They are completely wrong so often.  In this case their bad "guess" accrued to our benefit.

We arrived at the campground around 12:45 and Fred promptly showed us to our spot.  We had to drop the trailer, but it is directly in front of us about 20 feet away.  I was able to run a power cord to it from the coach so I have power, and XM radio.

It feels like drop top weather, so the hard top is off!

We quickly got set up, deployed awnings, awning mat, and lounge chairs.  Around 2 I realized I was very hungry, and then the realization hit me that I had not had anything to eat!  How did that happen? 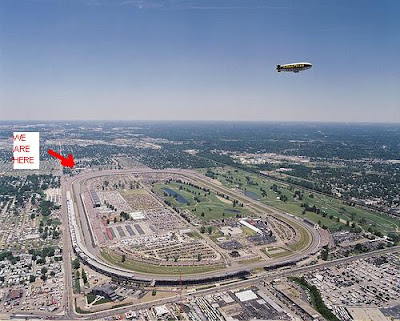 Aerial view of our location on the north end

Well, the T-Bird needed fuel, and our pantry and fridge needed some minor restocking so we headed over to the local Kroger's.....TLE had enough Kroger points to get 20 cents off each gallon of gas at their station.  Right next to the gas station was a pub called Grindstone Charley's, so we headed there for a late lunch around 3 pm.  The food was excellent, and the Fat Tire Ale draft was a nice addition.....TLE chose Guinness.

We then went food shopping and were home by 4:30.  While we were eating we did some checking on Yelp and there are a lot of micro breweries in the area.......I know what we'll be doing over the next few weeks.

Just before we got in the car to go shopping I heard a female voice yell "hey!"....I looked around to see a lady and gentleman we had met at Amazon.com in Campbellsville last year.  They are working here too!  They stayed at a different RV park than we did in Campbellsvile, so we never really got to know them, but we are looking forward to just that this time.  As coincidence would have it they are from Southern California....Pasadena to be specific....were I grew up!  Chris and her husband have been on the road full time since 2009....what a small world!

After returning "home" I took care of some insurance work, and then read for a while.  Around 7 I started watching the Bulls vs. Heat game, which the Bulls won in Miami....I was not expecting that result!

Later on we watched the season concluding episode of "The Mentalist", and then the second game of the night between the Golden State Warriors and Spurs, which required a herculean comeback by the Spurs to win by 2 in overtime.

A nice first day at IMS.  Tomorrow we go to "Check In" to get our shirts, hats, and ID.  On Saturday we start our on the job training.

Thanks for stopping by!
Posted by Whatsnewell at 5:46 AM