It appears old man winter has returned to the D.C. area....at least for a few days.  As the skies began to lighten Tuesday morning it was evident early on that this was to be another cloudy, rainy day just like Monday.  We wanted to get an early start as this was going to be a longer day than usual for us.....we had three things we wanted to see the inside of......National Portrait Gallery, Supreme Court and Library of Congress.

We managed to hit the road into the Beltway around 10:30, and were driving up and down the National Mall to find a 3 hour parking spot by 11.....no luck, so we headed over to the tidal basin and managed to snag the last available spot.  It was about 11:15 by this time and we had a 25 minute walk up to the Smithsonian National Portrait Gallery.  The building (shown below) used to be the U.S. Patent Office, and it is enormous.  In 1962 the building, slated for demolition, was given to the Smithsonian, and by 1965 it was reopened as the National Portrait Gallery.  What is on display are thousands of portraits and sculptures of important and influential people going back to the 1600's.  We spent over an hour of our time in the section called "American Origins". 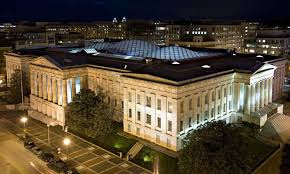 From there we went over to the America's Presidents section and looked at a portrait of every single President starting with Washington.  I took pictures some of the ones that interested me.  I found this picture of Ulysses S. Grant intriguing as well as his "bio".  He was a cigar smoker.....

Another one was Andrew Jackson.....cool hairdo, huh?  I loved this part in his "bio"....."...Jackson vetoed key Congressional measures, not because he deemed them illegal, but simply because he did not like them."  Oh that we had more Presidents like him today.

This portrait of Lincoln, for the time, was a sharp deviation from the typical stilted portrait of most Presidents.  Doesn't he look a lot like Daniel Day Lewis? 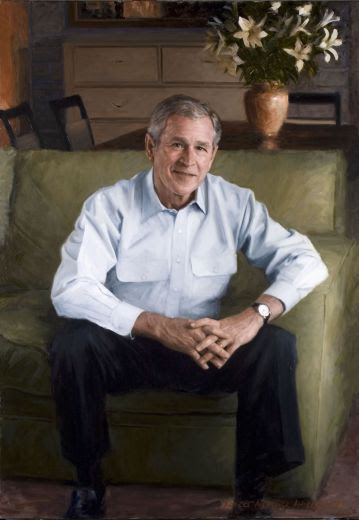 Before we knew it 2 pm had arrived and we had to make a 25 minute walk in 15 minutes back to our car to move it so we could explore for another 3 hours.  We were about 10 minutes late, but the "MAN" didn't ticket us.....in fact the "MAN" was no where to be seen....must have been the rain.  We drove back over to the National Mall and snagged a spot quickly right near the NMAH.  We were a little hungry so TLE pulled out some snacks and we sat on a park bench munching away while it drizzled.

Now it was around 2:45 and most government buildings start closing at 4:30 so we had to git a move on to the Supreme Court, which was about a 15 minute walk up and around the Capitol building......I see now why they call it "Capitol Hill".....that is quite a hill you have walk to get around it!

The Supreme Court building is undergoing exterior marble restoration, so I got this stock photo off the internet.  This building, along with the Library of Congress has a LOT OF MARBLE!

We entered the Supreme Court building around 3 and walked around a bit.  We wanted to see the actual court chambers and asked a lady at the info desk if that was possible.  She answered that it was, and that, in fact, in about 10 minutes we could actually go inside and hear a lecture about the Supreme Court.  We headed upstairs immediately and found a line already formed for that purpose.  You cannot take any pictures inside the courtroom, but you can stand just outside, like I did below, and take a picture....I was able to get 8 of the 9 justice's chairs in the picture.  The courtroom, suprisingly, is not that large.  The lecture lasted about 30 minutes.  They occur every half hour with the last one starting at 3:30.....so glad we made the last one of the day!

Below is a picture I took of the 5 story, self supporting, cantilevered, marble, spiral staircase....beautiful.

As we exited the Supreme Court it was just before 4 pm, so off we headed to the Library of Congress, which is right next store.  The interior of the Library is stunning....breathtaking.....just pick your favorite adjective.  Regrettably, most areas of the Library forbid any type of photography....the first picture below I took, but the 2nd one is a stock phot, and the 3rd one down of Jefferson's donated library is also a stock photo. 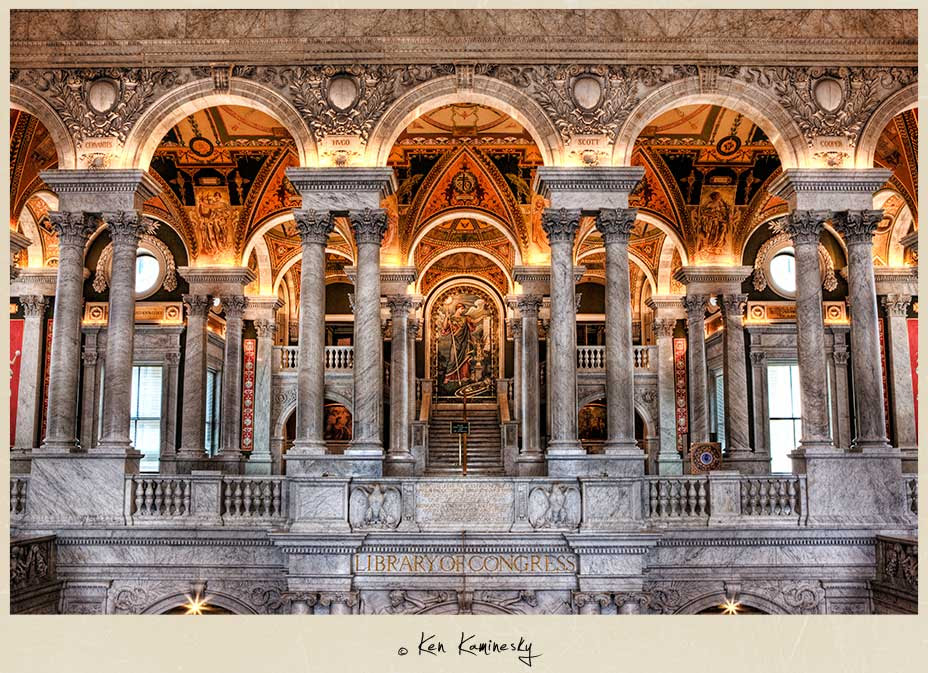 When the British set fire to D.C. during the War of 1812 one of the casualties was the Library....Thomas Jefferson donated his quite large personal library to the Library of  Congress to replace the books that were burned, and it is still preserved there to this day. 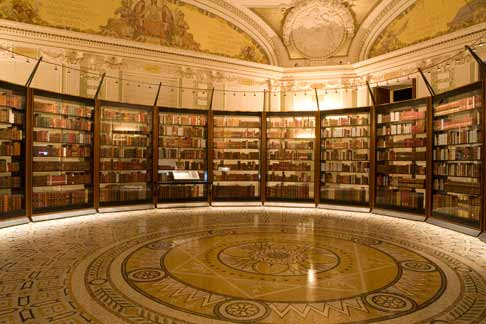 All good things must come to an end, and Tuesday was chock full of good things for sure.
As we walked around the right side of the Capitol the Washington Monument came into view shrouded in clouds.....I just thought it was a great shot, so I took it.

We walked back to our car on the National Mall through a light drizzle reminiscing about our 2 week adventure here in the Nation's Capitol.  It greatly exceeded our expectations.  Did we see everything?  Not by a long shot....I guess if we had spent 8 hours a day for 14 consecutive days we might have seen 50, or 60% of what there is to see, but that is not our style.  We saw 90% of the stuff that interested us, and we did it at our pace.  One thing is for sure......we really know this town now.  We probably walked around 5-6 miles Tuesday alone, and probably 20+ miles over the course of the 2 weeks we were here.

We began our last trek home to Greenbelt Park around 5 pm and actually made it home by 5:45.  TLE fixed me a great dinner of reheated Lasagna....I told you that stuff is even better after a week, or so!  Next we headed over to see Jonathan and Shari one last time, and do a little wash...that hamper is getting full!  One of the special things about our visit here was getting to know Jonathan and Shari much better.  They are really a sweet couple, and we will enjoy keeping in contact with them.  Of course, Jonathan loves craft beer, so he has a special place in my heart now.

Wednesday we pull up anchor and begin our 6 day trek over to Indianapolis, IN....we stop in Hagerstown, MD for a couple of days and drive up to Gettysburg National Battlefield....it's only 33 miles each way.

Thanks for stopping by!!!
Posted by Whatsnewell at 6:06 AM