First of all, I am NOT, and never have been, a "Race" fan.  I have never watched one car race from beginning to end.....maybe a few minutes here and there on Sportscenter.  You know how there are just some movies you know you must see on the "big screen", well this is one event you must see in person to appreciate.....and I mean that in the most sincere way possible.....I'm not saying this because I just spent 16 days working here at the Indianapolis Motor Speedway.

Frankly, all 16 days we were here each of my co-workers was encouraging TLE and I to make sure and watch the start of the race, and I politely replied "okay" to each conversation never intending to do so.  Of course, once again, I get ahead of myself.

Our start time Sunday, May 26th, was 3:15 am.  I woke up around 1 am, and just decided to get up.....I had gone to bed at 8 pm, so that was only 5 hours of sleep.....just slightly down from the 6 I've been getting.  As we made the long walk over to "Check In" for the last time we talked about the great time we've had here.  Sure the hours were long, but we made some wonderful friends.....not hard when you spend 12 hours a day for 16 days with someone.....you'll either hate them, or love them after 16 days.

To name a few of our new friends.....Lynnis, Rick, Deb, Joe, Greg, Phyllis, Eddie, Sarah, Walt, Dan.  All hardworking, loyal, dedicated people.  As Louis L'Amour, my favorite western author, would say......"people to ride the river with".  I've written often how at the end of the day we have seen a lot of cool things in almost 16 months, but it is the people we have met along the way that will remain long in our thoughts and memories after all is said and done.

Anyway, we clocked in, and immediately caught a van up to Gate # 2, where we arrived at 3:10 am.  Already there was a lot of activity at the gate.....we were turning away spectators who were trying to get a jump on the day 2 hours before the gates opened at 5:30 am.  When the gates did open it was immediately chaos.  On Race Day you must have a ticket for each person entering, plus, if you are driving your car into the infield, you must have a parking sticker affixed to the inside of your windshield.  There are 3 lanes going east, and 3 lanes going west on 16th Street.  Lanes 2, and 3 on the west bound side were entering Gate # 2, so two of us had to begin walking down the street in between the cars in these two lanes to "weed out" those who had no parking sticker.

This is the first year they have charged for parking on the infield.  In past years you only had to by an admission ticket to drive inside and park, so it was effectively first come first served.  This year you had to buy reserved parking at $25 per car in advance......that is quite a revenue enhancement.

As you might imagine those who were counting on free parking inside were "slightly" disappointed after waiting in line for an hour only to find out they couldn't get inside......just use your imagination.

I was on the line, except for 2 bathroom breaks, from 3:30 am until 11:45 am, walking up and down 16th street getting those without parking stickers out of the entry lanes, plus answering a few thousand questions about "what, where, when, and how".  Most people were pretty easy going, but in a crowd of a few 100,000 you're going to find a few cranky people.

At 11:45.....just about 30 minutes from the start of the race, our co-workers insisted we stop working and go up the ramp to see the opening ceremonies, and the start of the race.  Gate # 2 is located on the south side of the track between turns 1 and 2, so where we stood was exactly in the middle of these two turns where a giant TV showed us what we couldn't see.  The deeply ingrained traditions spanning over a century of racing here are maintained with an almost religious reverence.   The stands were packed, and the infield was awash with a sea of humanity as far as the eye could see.

We ended up watching the first 35 laps....there was a crash right in front of us on the 3rd, or 4th lap, and then things took off....Marco Andretti and Tony Kannan swapped the lead over and over again.  In all there were over 71 lead changes....a record.  The average speed of over 191 mph was a new record, also.  There were a few more accidents, but none serious, and all were cleared quickly.  We watched about 30 laps in the middle of the race, and then saw the final 45 laps.  I was very exciting to watch the leaders come through from the far side of turn 1 and disappear quickly on the far side of turn two.....our attention then switching to the giant TV screen in front of us.  At one point 25 cars were on the lead lap, and only separated by 9 seconds.  The weather was cloudy, and in the high 60's......perfect racing conditions for the drivers and their machines.

I must admit I had very low expectations, but to say they were exceeded is an understatement of serious magnitude.  I'm not saying I've become an avid car racing fan, but would I come back to see the INDY 500 in person......you bet! 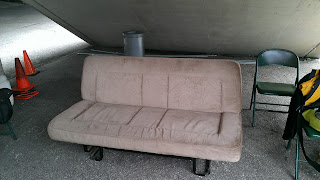 Van seat confiscated from the back of a pickup truck on Carb Day.....no couches allowed inside as people have set them on fire in past years.....really?  We used it to sit down on during our breaks 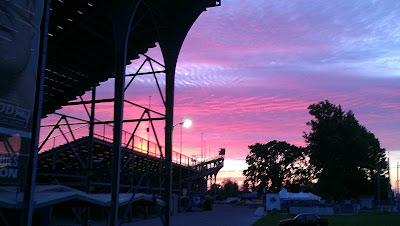 The dawn of a great day 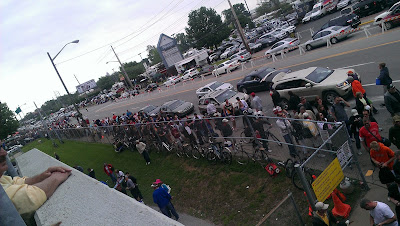 I took this series of pictures just before we went to see the start......most of the cars were inside by now. 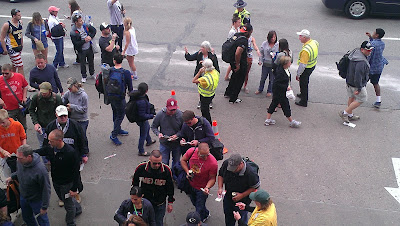 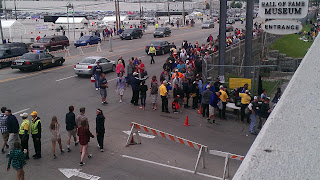 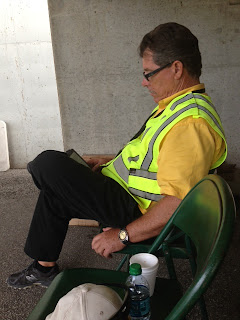 The race ended at 2:50 pm, and the track was emptied of a few 100,00 people, and cars by 5:30 pm....amazing.  The hardest part of our job after the race was keeping intoxicated people from crossing the street in front of cars exiting from the infield....there were a lot of close calls.

We clocked out around 6 pm.....so 15 hours on our final day.......we arrived "home" around 6:15,  got into comfortable clothes, poured ourselves a few fingers of Scotch and just sat there smiling at each other.  We have had a wonderful time here.  Of course, I know the question is coming....."would we do it again?".....my answer is swift, and without reservation......"YES!"

A big thanks to all our co-workers who made this experience memorable, and so much fun.......and to think we got paid!  TLE just calculated that we worked 115 hours each the past 9 days.

Wednesday TLE will fly out to Portland, OR for her annual women's retreat, and I will drive up to Michigan to visit good friends Krash and Karen, then over to Chelsea to see my sister and husband before returning Tuesday to pick TLE up at the Indianapolis Int'l Airport at 11 pm.  After that it will be time to roll the wheels, and start staring into the "Jello" once again.