Tuesday dawned clear.....is it already Tuesday?  Before we know it we will be standing on our feet again for 10-12 hours a day.  We decided around 11 am to walk over to the employee check in area about 2 blocks away to get our credentials, work shirts and hats.  Of course we both forgot our social security cards for our I-9 citizenship verification so while I filled out forms, TLE walked back to the coach for the ss cards.

Nevertheless, between now and then we will take care of important stuff like laundry, which we will not have any time to do after our assignment begins.  Tuesday the important stuff was to walk over the Hall of Fame Museum, which is about a 2.5 mile walk from our coach.  We found out Gate #2, our assigned work area, is also the way you get to the Museum. 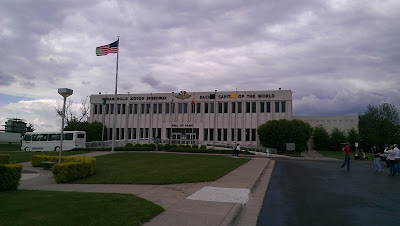 Like most interesting museums this one really requires most of the day, but we spent around 3 hours browsing through the history of the Indianapolis 500.  There are around 50-60 cars on display ranging from the first Indy 500 race in 1911......below is the first Indy 500 winner in 1911.

First rear engine winner driven by A.J. Foyt in 1967, who is the only driver in Indy 500 history to win in a rear engine and front engine car 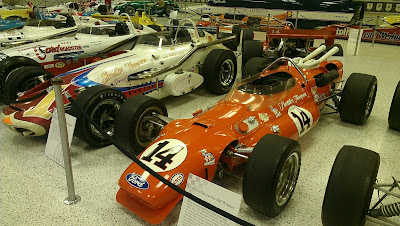 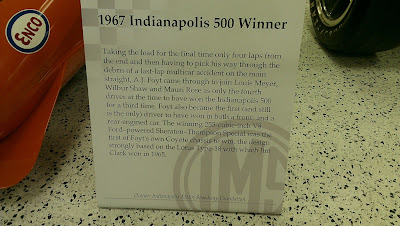 A.J. won his first 500 in 1964 in the aforementioned front engine car, which I neglected to get a picture of. 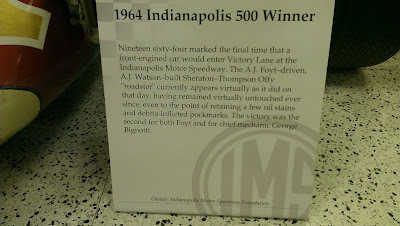 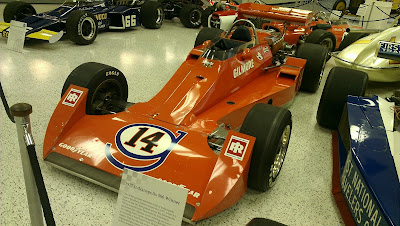 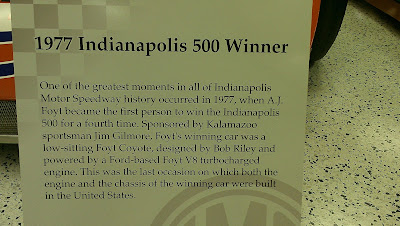 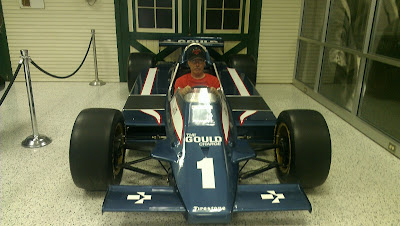 Years ago I had a friend named Tom Milton who began as an insurance customer.  He, regrettably died a few years ago of a heart attack while riding his bicycle.  I remembered he had told me his grandfather had either won the Indy 500, or had been a contestant.  While looking at the pictures of all the winners since 1911 I found two pictures of a Tommy Milton who won in 1921 and 1923....he and my friend Tom could have been brothers.  Very cool to confirm that story after all these years.  Tommy Milton was the first two time winner of this iconic race.

Around 4:30 we began the 2.5 mile walk home.....arriving home around 5:15.  While TLE prepared some veggie side dishes  (squash and broccoli) I got out the BBQ to grill some salmon.

Around 8 we began to watch some recorded shows from Monday night......Castle and Revolution, and then I watched parts of two NBA playoff games before turning off the TV and reading for a while.

Another nice day of fulltiming!  Thanks for stopping by!

Posted by Whatsnewell at 8:42 AM