Has this every happened to you?

We woke up in Bozeman, MT to low 30's temperatures......not uncommon for Montana, and not uncommon for this time of year in a lot of the northern part of the lower 48.  Our main reason for stopping off in Bozeman was to visit with our nomadic friends Chris Kopp and Jeanne Callahan who own a 1989 Prevost (Marathon) XL-40 coach.  Chris and Jeanne have been here in Bozeman for almost a month now while he does some specialized work for a local guy who is prepping a truck for the Pike's Peak Climb, so he has a regular work schedule during the days.

TLE and I decided to make Tuesday a clean 'er up day.....there was a lot of dust and dirt that had ingressed over the 4 weeks we were in Sidney.  Additionally, the T'Bird was filthy from driving through mud and gunk for a month, and it was time to give her a thorough vacuuming, and then a run through the local car wash.

While TLE handled the car project I started out to diagnose a problem with the 12 volt lights in our overhead storage cabinets in the "salon" area.....they had suddenly quit working a few days before.  Of course, as you know, in my mind it is always a big problem, and will take hours to fix, but I still try to follow the basic troubleshooting 101 steps.....check the fuse bank first to see if there is a bad fuse.

I had already checked the front fuse bank under the dash, because it is easy to get at.  There were no blown fuses up front so I knew I had to get into my closet and check the rear fuse bank, but that involves taking out a couple of plastic storage bins, so I had put it off until I knew I would have time.  As I counted down form the top nine fuses to find the one that covered that part of the coach it appeared that fuse was fine.  Even so I grabbed it with my fingers and kind of spun it a little to be sure the contacts were good.  I really didn't think that was the problem, and then went to empty out the first storage cabinet to get at the wiring in the "wire chase" to see if there was a loose wire, or a bad ground.  When I opened the door I didn't notice the light was now working.  I was so focused on getting deeper into the "weeds" on this problem, and was still assuming it was going to be a complex problem to fix, I didn't realize I had fixed it by twisting the fuse.  TLE says "Clarke, look the light is on".....I looked, and sure enough it was on.  I then began opening the other cabinets and found the lights working there, too.  Cool!!  One project down......and that was what I assumed would be the more involved project.....of course the Jello had a surprise in store for me.

Next I tackled the removal of our 10 year old Panasonic 22" flat screen TV so I could install the new Phillips 30" LCD flat screen TV we had purchased at Walmart the day before.  Amazingly it did not take that long, and within 90 minutes we had our new, larger TV installed.  The new Phillips TV weighs about 1/2 what the old one weighed, and has a sharp, clear, LARGE picture!

Instead of mounting the TV on a fixed wall mount bracket, we bought a $50 articulated wall mount for this new TV.  Why?  Well, the old TV fit perfectly in between the two cabinet doors you can see on either side of the TV in this picture.  With the new wider TV we need to be able to move the TV side to side to get in each cupboard.  As it turns out, this solution works perfectly, and now we have a much bigger TV to watch.

So, now I've gotten two projects out of the way, and I'm thinking it's all down hill now as I start my third project, which was to dump the black tank, and the flush it out 2, or 3 times with fresh water.  Since we were relying, in Sidney, on the pumping company to empty both tanks twice a week we could not flush it out.  On the side of black tank on the passenger side there is a "sight tube" which enables you to see how full the tank is.  It appeared to be filling slowly so I "assumed" the water pressure was low.  Mr. Jello loves people who make assumptions, and he must really be in love with me.  When I thought the black tank was about 1/2 full it was really completely full and now spilling over into the gray tank and filling it up.  Suddenly I hear TLE yelling....."CLARKE!  CLARKE! STOP FILLING THE TANK!" .  I turn off the water quickly while hearing TLE tell me the bathroom sink is overflowing, and the shower is full of, you guessed it, BLACK water.....OMG, what happened? 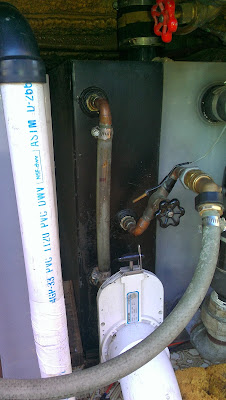 What happened is the lower end of the site tube had become somewhat clogged and was not showing me the true level of the water in the tank.  I went over and opened the gray tank valve and the water gushed out.  I spent, with TLE, the rest of the afternoon cleaning up from that goof.....as it turns out we have exceptional water pressure.  A lot of clorox was used disinfecting the bathroom sink, and shower pan.

We had planned, after I finished dumping and flushing the black tank, to drive into town and check out a local brew pub called Montana Ale Works for lunch after washing the car, but that went by the wayside with the intervention of Mr. Jello. 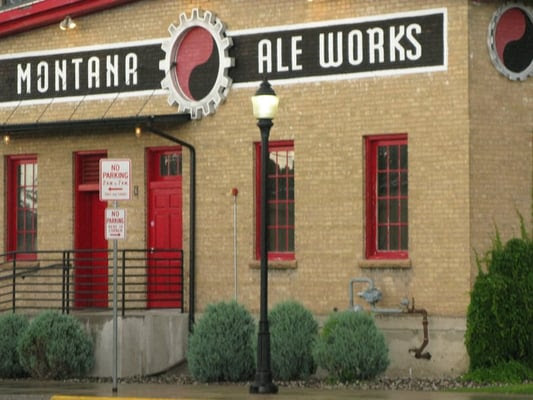 Montana Ale Works is located in the old Great Northen Railroad Depot, and it spectacular. 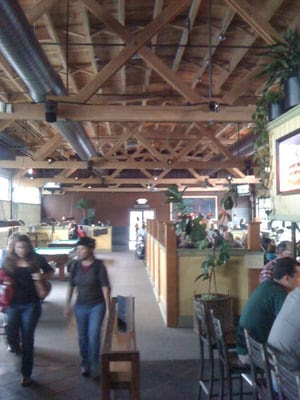 Since we hadn't had a chance to check it out Chris and Jeanne suggested we go there for dinner, and that is exactly what we did at 6:30 pm.  We had a lovely, delicious dinner.....Chris and I had the fish tacos, Jeanne had a steak and TLE had the Grilled Chicken Rissoto....everyone loved their dishes, and we can understand now why Yelp gives them 4.5 stars on 163 reviews.  I had a seasonal Pumpkin Stout that just made my knees weak.  I have to say, it is really great to be back in a town where fine draft micro brewery beer is available.

We headed back to Chris and Jeanne's Prevost for an after dinner single malt scotch, and then said our farewells around 10:30.  We both agreed that it was been great to get to know Chris and Jeanne better, and we look forward to seeing them again when they come to Southern California in early January.  One interesting thing I learned is that Chris builds bike frames, and for a period of time in the past that was his business (Chris Kopp Bicycle Works).  It is indeed a small world.....I had actually seen a couple of his bikes in California, and had not associated him with the bike.....very cool!

That was our day with all the good and the not so good......thanks for stopping by!
Posted by Whatsnewell at 7:46 AM