Originally the weather guessers forecast that Wednesday would be partly cloudy, but it became obvious rather early in the day that we would have nothing but sunny skies all day long.  When I broke my slumber the batteries were down to 85%, and because on the prior three days at our river front location we had not gotten back to 100% with very sunny skies for the reasons I have iterated previously I opted for the nuclear option.....turn on the Kohler 7.5 kw generator for about an hour to get us at least back to 90% before the suns rays took over. I knew from prior experience that if I waited for the sun to clear the trees I would down to 82, or 83% (I had the three Suburban gas heaters rocking) and might not even get back to 90%.  It turned out to be a good plan......within the hour we reached 90% and I turned off the Kohler.  By noon we had hit 100% for the first time at our new site!

Just to clarify, we do not need to get back to 100% each day.....in fact we could go a week or more never hitting 100%, and probably not even, at some point, getting back to 90%, but eventually you need to get them back to 100%.....at least every 7-8 days.  The thing you don't want to have happen with flooded cell batteries is to let them get below 50% because then you will cause damage to your batteries, lose storage capacity, and ultimately shorten their life span considerably.

Along with the sunny skies we also got winds from the east for a few hours at around 9-10 mph.....they were cold.  Although I sat outside for a couple of hours reading and enjoying the ambiance of our site, TLE is not a fan of cold, or wind......especially with her allergies, so the the walk we had planned to take got shoved to the back burner for another day.  Eventually as the winds abated TLE did eventually come outside to join me.

We had plans to drive up to Lake Havasu City, AZ to have dinner at the local Elks Lodge.....every Wednesday they have BBQ'd ribs, and they are renowned to be exceptionally good.  Our friends, Steve and Candy, dropped by Crossroads around 3 pm (Mountain Time) to pick us up for the 40 minute drive north.......we eventually came to Parker Dam....... 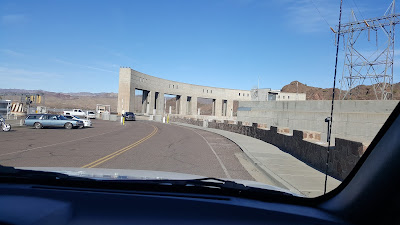 .......we were pleased to see that the lake behind Parker Dam (Lake Havasu) was completely full for the first time in years, and I wish I had taken the time to snap a picture....you'll just have to take my word for that.  I was curious what 'Havasu' meant so I looked it up......it refers to an indian tribe, the Havasupai who lived in the area of the Grand Canyon for some 800 years......the tribal name literally means 'blue-green water havasu) people (pai)'.

We arrived at the Elks Lodge just before 4 pm (Mountain Time) which is when they begin to serve dinner.....this lodge serves in excess of 1300 meals on Wednesday nights and do that in approximately 3 seatings.......the interior is enormous!  Their 'Happy Hour' drink prices are amazingly low.....$1.80 for a pint of draft beer!  The ribs were served in short order and they were just as advertised.....so tender with meat literally falling off the ribs.

Afterward Steve and Candy gave us the 25¢ tour of Lake Havasu.......this town is built almost entirely on the side of a long and wide alluvial plain....... 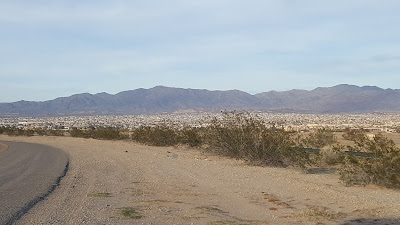 A panoramic view of the city

.......any visit to Lake Havasu must include a visit to the iconic 'London Bridge'......this bridge was literally dismantled in London, England many years ago and reassembled here in Lake Havasu in 1971....... 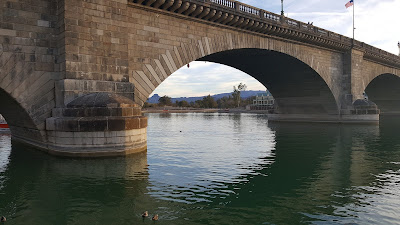 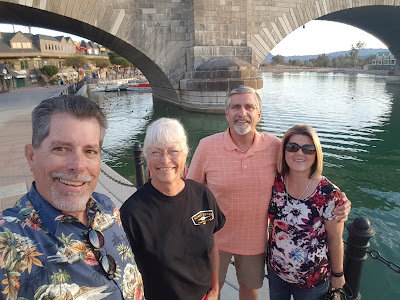 ......after a brief stop at the local Basha's (Arizona supermarket chain) we were on our way back south........we were back home at the Newell before 7 pm (PST)........as I have often remarked, there are just some people you immediately 'click' with in this lifestyle and Steve and Candy are just such people.  We always have a great time with them, and enjoy all the new friends we have met through them.

Thanks for stopping by!
Posted by Whatsnewell at 9:15 AM