1:30 pm - PST - Friday - We are on the road today.....there was no Verizon broadband all last night, or first thing this morning in the Borrego Springs area.  I will put a blog post up later this afternoon when we arrive at our destination.

4:40 pm - PST - Friday - Our plan when we went to bed Thursday evening was to drive into Rancho Cucamonga to pick up our mail, and some packages at our son's office, get haircuts, see our kids and spend the night, returning to Anza Borrego State Park Saturday morning.......we have completed the first part of that plan, and are now in Rancho Cucamonga at our son's home.  It was extremely windy Thursday night and into early Friday morning, but it finally calmed down around 4 am.  We lost Verizon Broadband sometime Thursday afternoon, and it didn't return until just a few minutes before we got in the VW to drive to Rancho.....so, what happened Thursday?

Thursday began with winds in the 'teens', and we fully expected to be home bound most of the day, but by mid morning the wind abated enough that it was comfortable being outside.  We spent most of the morning reading, and I eventually ventured outside to putter around in the trailer, and around the Newell.  The wind was out of the north and very chilly, so I still had my pajamas and a sweatshirt on until early afternoon.

Since the winds had calmed significantly I decided to take a short bike ride......nothing of the 20+ mile variety......just a short 10-12 mile ride.  As I eased on to S-22 I decided to turn left and head east towards the Salton Sea for about 6.5 miles and then turn around.  As I rode I was unaware that the winds had come back up and that I was being pushed gently along by a tail wind.  By the time I reached the 6.5 mile mark I was flying along at close to 30 mph so I continued on for a little longer.....for some some reason it never occurred to me why I was going so fast.......that is until I turned around at the 7.2 mile mark thinking that was far enough......it was then that I was hit by the 12-15 mph wind coming directly out of the west now.  My 'out' time to the turn around was about 31 minutes, and the road home was all downhill, however, the head wind was so stiff it took me 39 minutes to get back to the Newell, and I had to pedal the entire way due to the headwind......... 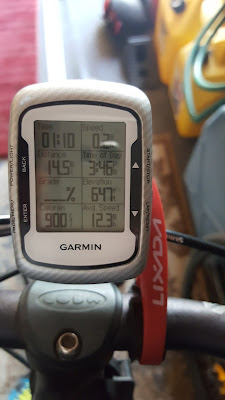 The tale of the ride

Around 5 pm I grilled some carne asada for the hard shell tacos TLE was planning, and was sitting eating them by 5:20.  The winds began to increase in intensity all evening, and we had gusts in the neighborhood of 40 mph several times during the night.  I woke up several times to the howling wind, but finally by 4 am it was once again quiet.
Posted by Whatsnewell at 1:21 PM