Wednesday was a day for which I had been waiting for almost a year.....the day when I would get my two crowns and get my smile back.....I'd been self conscious to a certain degree of the large two tooth gap I had on the upper left side of my mouth.  That it took so long is not the dentist's fault, but mine alone........ 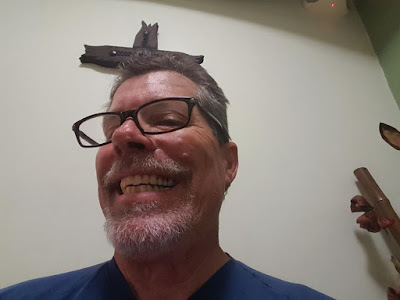 The smile is back!

.....a little history might help......last January I had an appointment to have my teeth cleaned.  We were in Quartzite at the time with our friends Steven, Linda, Mike and Liz, so TLE and I drove down to Los Algodones for the appointment.  During that cleaning and examination Dr. Urena determined I had an abscess in a tooth in which I had a root canal when I was 13, and then had redone when I was in my 40's......the dead roots had cracked.  I was immediately sent next door to Dr. Hernandez for an assessment.  He advised that I should have that old root canal extracted (dentist lingo), and in addition to that the tooth next to it was also cracked and would need a root canal to save it.  I could have had the extraction that very same day, but decided I wanted to wait until TLE's next appointment, which was a month later.  As a result of that decision the entire process to extract the tooth, then surgically install a post to which a new crown would be attached was delayed.  By the time I had the dental surgery for the post installation it was early April and we had to be in SLT May 1st......Dr. Urena said the surgery would need at least 2-4 months to heal putting us into the middle of the summer.  I didn't want to drive 1400 miles round trip to get the impressions for the crown, and then wait 5 days to get the crown installed, so I once again deferred the impressions and crown installation until December after my cataract surgery in November.

When I had my appointment December 5th for my impressions Dr Urena told me that because I had waited so long she was going to have to shave some of the bone growth around the post back, which required more gum surgery, and another month's delay.  I returned to her office two days after New Years hoping then I would get my impressions done, but once again I had failed to keep the area around the dental implant clear of food particles, and as a result the gum was swollen......she would have to clean out the areas around the post, as well as around the remaining portion of the other tooth in which the new root canal had been done.....the result....another month of waiting.

So, alas, we come to my appointment on Monday when Dr. Urena pronounced I had done a good job the last 4 weeks of keeping the area clear of food particles, and we took my impressions.......Wednesday was the day my 12 month odyssey came to an end, and I got my smile back.  It only took about 20 minutes to install both crowns (they are side by side)......I was so happy I gave Dr. Urena a hug telling her how thankful I was that she had restored my smile!

Now a little clarification on costs......I mistakenly believed that both of my crowns would cost $700-800 each.  This was based on TLE's prior dental post and crown installation a year ago.  The surgery to install the post is $800, and then the crown, because it is a combination porcelain/metal crown so it can be screwed on to the post, costs $700 for a total of $1500.  Regular porcelain crowns cost just $330, which is what the crown covering my new root canal tooth is.  Root canals cost $440, and extractions are $90.  To give you perspective when I was using my California dentist a root canal cost around $1200-$2000 depending on how many roots, and crowns closer to $1700.  Extractions were $300-400.  So, as you can see, the cost savings using Dr. Urena are significant!

Okay, on with the story......TLE went into the chair after my smile restoration was complete to have a wisdom tooth extracted, and that took less than 20 minutes......lucky TLE.....my extraction last year took almost 2 hours and required a bone graft, and many stitches.  We will return in one month for TLE to get her impressions for four crowns, and 5 days later their installation.....we are almost done with our major dental work......hopefully after this it will just be periodic cleanings and exams.....hope, hope, hope!

We were back in the good ole USA by 4 pm walking the final 1/2 mile to our car, and home by 4:20.....I had to immediately eat some grapes to find out what it was like to once again be able to chew on both sides of my mouth......how wonderful such a simple thing can be!

We plan to remain here at the 'Q' until Friday morning at which time we will head north about 100 miles to do some more dry camping near Borrego Springs!