In spite of not getting to bed until almost 1 am, I was awake at 6:30 am, and not able to get back to sleep.....I wanted to sleep more, honestly I did, but it was just not in the cards, so I got up and lit the burner under the coffee pot to get the coffee going. Then I went outside to turn on our house batteries.

An interesting note for those who are interested in electrical stuff.....I have a GUEST four way switch on my house batteries that enables me to draw power from each each battery separately by choosing 1, or 2, or I can, as has always been the case, draw from both at the same time by choosing 'BOTH'.  It also has has an 'OFF' position, which I have only used in the past when the coach has been in storage for long periods of time without a power source.  I began to experimenting by turning the batteries to the 'OFF' position about two weeks ago when the chassis battery was going bad, and have found that whatever percentage of charge the batteries are at when we go to bed, they are still at that same percentage when we get up.......turning them off stops the overnight discharge when we are not needing anything from them.  In the past I have just left this switch in the 'BOTH' position and our batteries continue to discharge overnight another 5-9% depending on the outside temperature.  Why it never occurred to me to turn them off, or 'isolate' them I cannot say, but when we were having the issue with the chassis battery a couple of weeks ago I began doing this to protect them from the then mysterious drain.  At any rate, now even on partly cloudy days our batteries are getting back to 100% easily, and we are not having to run the generators much at all.....cool!  No point in having them on when we do not need anything from them, right? 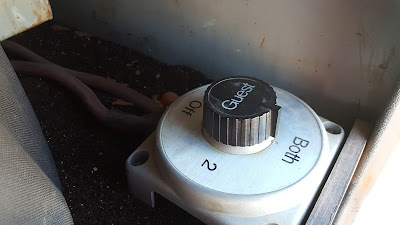 Monday was sort of a recovery day for TLE after Sunday night's Indio escapades.....she knows if she catches the infection early on with antibiotics that relief will come quickly, and that is just the case this time.

We had made plans Sunday night to hike with Bill and Patsy up to the 'stone snake' sculpture, but TLE was not feeling it, so I joined them at 10 am to show them the way. 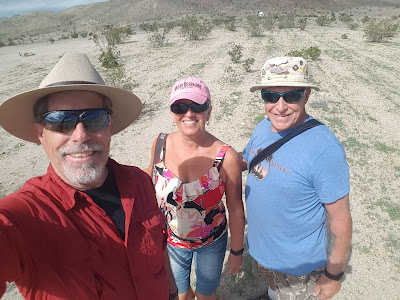 Of course, there must be an 'usie' 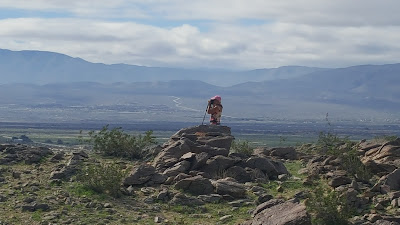 Patsy taking some 'long' shots at the top 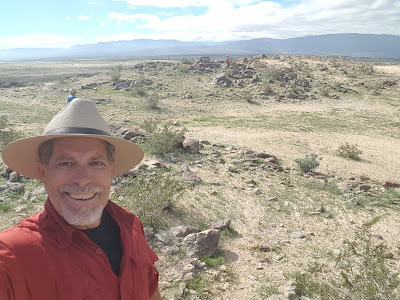 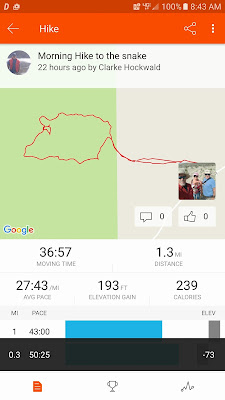 ......so later in the afternoon I got my Cannondale Bad Boy out and rode about 14 miles to get the final 761 calories.  I have found over the years that when I can consistently burn 1,000 calories, or more each day I am able to lose weight while still eating normally, and that has once again proved to be the case as I have lost about 11 pounds since I started about 4 weeks ago.  I get it in many different forms......power walking with TLE, hiking, bike riding, working out.....as long as any single activity, or a combination of activities achieves that daily goal I am able to keep my metabolism running which helps me lose the weight.....the secret, of course, is to do it consistently.  Now, to be fair, I do give my 67.5 year old body a day off here and there.

Since our Canadian friends Bill and Patsy are leaving for new adventures on Tuesday we invited them over for a campfire at 5:30 pm...... 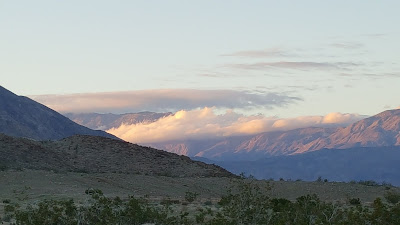 .....Patsy's sister, Gayle, and her husband, John, had just arrived in their 5th wheel, so they came along also.  We talked and laughed for over two hours before it was time to bid our adieus for another day.....we have so enjoyed getting to know Bill and Patsy, and now Patsy's sister and her husband......it is one of the many blessings of this lifestyle!

Thanks for stopping by!
Posted by Whatsnewell at 10:14 AM