So, Tuesday was round two for TLE's week of marathon root canals........she had two appointments scheduled.....the first at 10:30 am, and the second at 2:30 pm so we departed for the 3 minute drive down to the Andrade, CA border crossing into Los Algodones, MX.  Since we would be entering Mexico on three consecutive days at $6.00 per day for parking we decided to park 1/2 mile from the border and and walk the rest of the way.  In all it is almost exactly 1 mile to Dr. Hernandez' endodontics practice from where we parked.

After parking we began our walk having no idea what a marathon day we had ahead of us......well, maybe mostly for TLE.....I was along in a supporting role.  The morning appointment took about 90 minutes, which is what we had expected.....we were out of the office and walking down the street to 'Best Optical' a little after 12 pm......TLE wanted to get some new computer glasses to use this summer at TVC.  By the time she finished choosing the frames, and placed her order it was about 12:30 and we had two hours to kill before the next appointment so first we walked back to Dr. Urena's office (in the same courtyard as Dr. Hernandez) to see if my crowns would indeed be ready Wednesday, and confirmed that they will be so I am scheduled to return on Wednesday at 3 pm to have them installed.  From there we walked a couple of blocks over to Mariscos El Paisa located at the intersection of 3rd and B Streets for some shrimp cocktail and a Dos Equis for me.....TLE didn't feel much like eating so she mostly watched me eat shrimp while stealing a few bites here and there..... 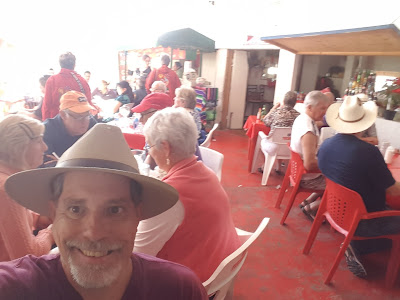 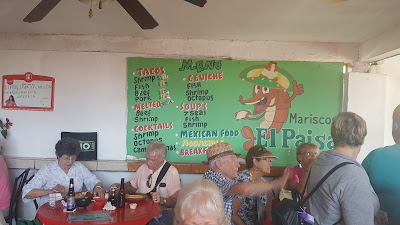 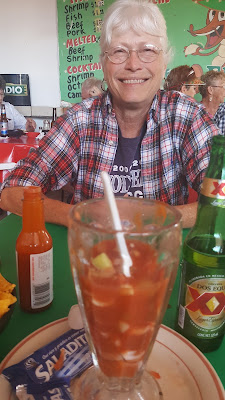 I chose the 'medium' shrimp cocktail.....yum!

.......the bill for my lunch.....$9.....perfect!  As we exited the restaurant it was about 1:30 so we had another hour to kill....we spent about 30 minutes walking around town checking out some other restaurants, and several of the many, many liquor stores before returning to Dr. Hernandez' office at 2 pm to wait for them to call TLE for her 2:30 appointment thinking that after this appointment she would have just two more on Thursday (11 am, and 2:30 pm).

She went in around 2:40 pm so I expected, based on past experience both for me, and also her prior appointments that she would be done around 4:10 to 4:20 pm (MT).  Well 4:30 came and went and still she had not emerged.....finally just as I was getting up to check to see how much longer she would be she came through the door......it was 5:20 pm.....WOW!  As it turns out Dr. Hernandez decided to just finish the remaining root canal instead of having TLE come back on Thursday.....YAY!  So the extra hour was worth it.....now we just have one more short appointment on Wednesday and are free to roam until TLE has to come back for her impressions and crown work in early March.

Since it was 5:20 pm we knew Best Optical was closed for the day, so we'll have to pick TLE's computer glasses up on Wednesday.  By the time we got the border crossing the line one and a half times longer as it was on Monday......we finally crossed back into the USA just after 6:10 pm still having a 1/2 mile walk back to the car....... 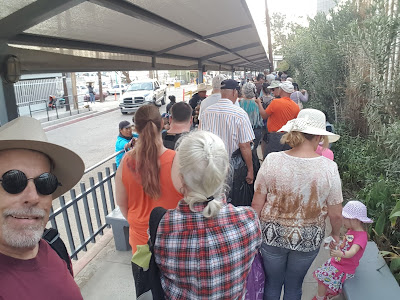 .....we were home a little after 6:30 with smiles on our collective faces.....just one more short appointment and we are on our way to Borrego Springs for a couple of weeks.

Posted by Whatsnewell at 6:07 AM