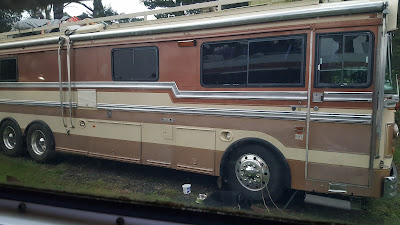 .....my long time friend Claude has joined us here in Seal Rock, OR for an overnighter in his 1984 Bluebird Wanderlodge.

It had rained all night into the early morning hours Saturday, but by mid morning the rain had stopped, and we even got a smidgen of sun.

I received a text Friday night from my long time very good friend Claude Banker who lives in Oregon near Salem.  He wanted to drive his 1984 Bluebird Wanderlodge over to the coast for an overnighter and wondered if we had a spot for him at SRRVC.....of course we do, right next door to us is site A-2, which is never occupied.  I checked with Terry (our manager) to see if it would be O.K. for him to park there overnight and he quickly replied 'Of course!'.  He (Claude) had not driven the Wanderlodge for a few months after returning from a couple of months on the road with us, and wanted to get it out and stretch its proverbial legs.  As you will recall Claude and Gail met us in Driggs, ID at that fabulous boondocking site on the Teton River back in early June.....

.....he arrived with his good friend Gail, whom we met this summer, around 11:20 am, and we had them backed into site A-2 within 5 minutes.  Shortly after that we drove into Yachats (pronounced Ya-Hats) around 11:45 am for lunch at the Yachats Brewing Company.  This micro brewery is very popular and the limited seating (due to the Wuhan Flu) fills up quickly after they open at 12 pm.  We got there around 12:10 pm, and got one of the last two tables.  We haven't seen Claude and Gail since late July when we parted ways in Kalispell, so we had a lot of catching up to do.  We talked and ate until almost 2 pm before it was time to head for the barn.  After a quick stop at Ray's Supermarket in Waldport we were home by 2:30 pm.  After all that good beer, Smoked Salmon Chowder, and Brisket sandwich it was time for a nap.

You will recall that about a week ago the owners of SRRVC (Bill and Tina Brown) treated the staff to take out meals from Georgios in Newport.  TLE and I had ordered two bowls of their Clam Chowder which was very good.  The next day while thanking Bill and Tina for the Clam Chowder I mentioned that the best Clam Chowder I ever had was from Tony's Seafood Restaurant in Cedar Key, FL, although I thought Georgios was definitely in the top two, or three.  He was intrigued by my claim, so he called Tony's the next day and ordered several cans of their world famous Clam Chowder (they won the world clam chowder cookoff 7 years in a row) so we could have a Clam Chowder taste off.  On Friday they distributed a can to each of the camp host couples, and then on Saturday afternoon they went into Georgios Beachside Grill and Mo's Seafood and Chowder in Newport and got several cups of their chowders.  We were instructed to reheat them at our convenience and do a blind taste test sometime Saturday.

Around 6 pm TLE prepared the three chowders and we met Claude and Gail at our picnic table for the blind taste test.  Ironically, TLE and I both chose Tony's as our favorite of the three, and Claude and Gail chose Georgios'.  All three were quite good, but Tony's....for us anyway.....was the best of the three.

After reporting the results of our blind taste test to the Browns we retired to the firepit for our first campfire since arriving in Seal Rock almost a month ago.  it was good to get out our portable fire pit, and enjoy an evening around the fire.... 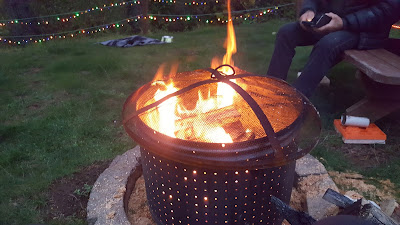 ......we talked until after 8 pm before retiring to our individual abodes for the night.....good times for sure!
Thanks for stopping by!
When you shop Amazon, please use our link (below) to access their website.......we will appreciate every purchase you make using our Amazon Affiliate link, and  remember, using our link will not add one penny to your purchase, plus we will receive a small commission which over the course of a year adds up to enough to by a tank of diesel for which we thank you very much!
Posted by Whatsnewell at 8:41 AM