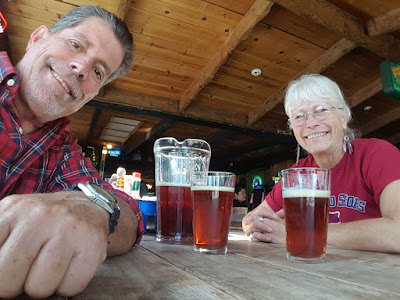 We're now 10 days into May....the sun is much higher in the sky, and that sun, which used to rise in the southeastern sky is now, decidedly, rising in the northeastern sky.  The daylight portion of each day is now over 14 hours in duration, and the sun is setting after 8:30 pm.  With the sun rising before 6 am I am now waking up a lot earlier.  We are enjoying passing through each season here on the Oregon Coast.
For me Sunday means retrieving the Massey-Ferguson loader from the barn, and returning to my gravel spreading business, and specifically to site #12.  We've had a couple of complaints lately about how unlevel this site is, and since it was going to be vacant for a couple of days I got busy working my magic....lol.  Within two hours I had it very level from side to side, and mostly level from back to front..... 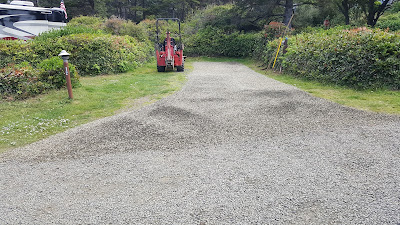 ....before I began hauling gravel to this site there was hardly a speck of grave visible.  I guess it's been a few years since anything was done to this site.  After finishing site #12 I called the office to ask TLE for another site which had no reservations for a couple of days, and she suggested #8, which is one of three pull through sites in the park, and is pretty long.  I managed to cover about two thirds of the site by 1:45 pm when I decided to call it a day.  By the time I put the tools away, and parked the loader I had been working for 4 hours.....those longer days are getting easier and easier!  TLE's new Sunday/Monday schedule is 9 am to 1 pm, so she's working more hours, also.
After a suitable amount of recuperation time TLE helped me move my old leather recliner out of the trailer, where it has been residing for the past couple of weeks, into the back of the Beetle, and up to the barn where it will remain until we find someone who wants it.  We covered it with an old bed sheet to keep the dust off of it.
I spent some time working on the steps I cut into the hill behind our site which provides a short cut through site #2.  We only use it when no one is in site #2, of course, but the existing path was steep, and slippery..... 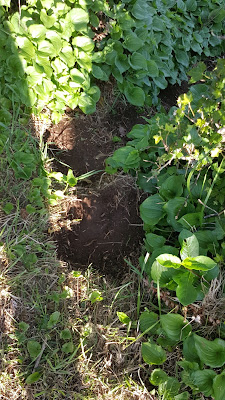 .....they don't show up well in the picture, but once I put a layer of gravel on each tread they will be more visible.
Thanks for stopping by!
When you shop Amazon, please use our link (below) to access their website.......we will appreciate every purchase you make using our Amazon Affiliate link, and  remember, using our link will not add one penny to your purchase, plus we will receive a small commission which over the course of a year adds up to enough to by a tank of diesel for which we thank you very much!
Posted by Whatsnewell at 8:40 AM