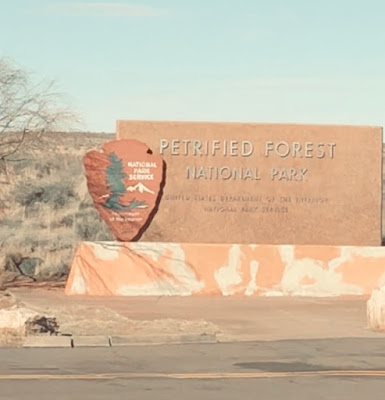 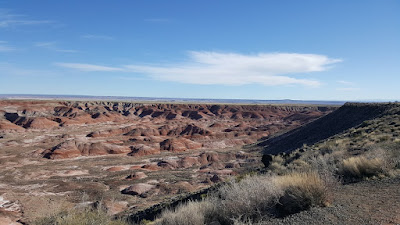 The wind blew all night Sunday night,  was still blowing over 20 mph as the sun crested the Chocolate Mountains to the east Monday morning, and would continue that way until after 3 pm.  As Sana Ana wind events go, this one was rather short lived lasting less than 24 hours. The wind was directly out of the north most of the time, and was it ever cold.  How cold was it you ask?  We turned on all three gas furnaces, and all three electric heaters first thing to take the chill of the Newell interior.  Within 20 minutes we were turning off the gas furnaces, but we left two of the electric heaters on for the entire day, and into the night.

With all of the window awnings, and the patio awning stowed we did not notice the wind too much during the night, but the wind gusts increased dramatically after sunrise making the coach rock back forth at times.  As I write now (Tuesday morning) there is hardly a breath of wind.....it is so quiet I can hear those proverbial pins dropping.

As is our habit during wind events in the SoCal desert we stayed inside for 99% of the day.  I did spend a few minutes outside first thing retrieving items which had been blown from the 'lido deck' into the UTV parking area, but that was the extent of my ambition for the day.

TLE and I watched the entire British Premier soccer match between Fulham and Tottenham, which was won 1-nil by Tottenham on a beautiful goal by Harry Kane in 'added time' at the end of the first half.  Our boys had lost two games in succession, so it was good to see them back in the 'W' column with a clean sheet (no goals allowed).

Whenever our pantry and fridge begin to get a little empty TLE begins to gather food items together she has saved from other meals and put them together in soup form.  For dinner she prepared what she now calls chicken/cabbage soup, and it was the perfect wintery day fare.  To be sure there was a lot more in that soup than just chicken and cabbage, and it all tasted wonderful.

I mentioned previously that we watched the first episode of 'Utopia' on BritBox the other night.  There are just two seasons, each containing 6 episodes.  We watched a few more episodes Sunday night, and sat down after dinner to watch just a few more, but ended up watching the final two episodes of Season 1, and all 6 of Season 2.  Wow!  The series description was very cryptic, and we had no idea what it was really about.  Knowing what we now know about the Wuhan flu, and all of the vaccination controversy the past 3 years, it was almost surrealistic to watch 'Utopia', which bears a striking resemblance to what we were all put through since January of 2020.  I'll leave it at that, except to say this.....this series ran from 2013 to 2014, and there are just the two seasons....it is kind of chilling how prescient this series was and is.

Posted by Whatsnewell at 9:39 AM