I began Sunday watching the NY Giants and L.A. Rams playing football in London.....the Giants outlasted the Rams winning 17-10.  Then it was time for the rest of NFL Sunday Ticket......and while those games were getting started I headed out to the trailer to begin putting more stuff away in preparation for our departure next Sunday......yes, we are actually leaving SLT and TVC next Sunday....well, I am leaving next Sunday morning.....TLE will be flying back to Reno from Dallas Sunday morning, and the plan is that she will meet me in Carson City Sunday afternoon, and then Monday morning we will begin our three day drive home to SoCal. 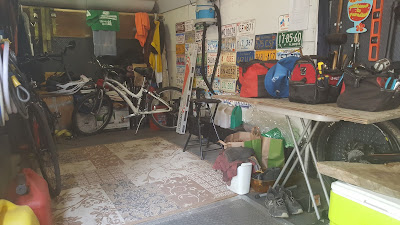 I can see the back of the trailer again! 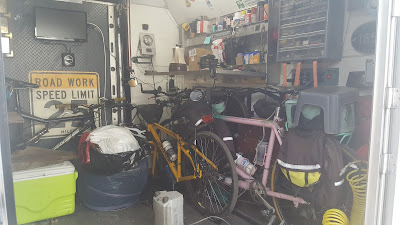 In about 2 hours I managed to stow the Cannondale Tandem, my Intense 5.5 mountain bike, and TLE's Cannondale F600, my Black & Decker Workmate workbench, the bench grinder the Park bicycle stand, the step ladder, and various bike tools.  The only bikes left out still are my Cannondale Bad Boy and the Motiv we bought for Amy, which we will now transport home to deliver to her.......they will both be stowed by next Saturday.  Still left to put away are my three tool bags, the table on which they sit, and a few other things, but by and large the trailer is ready for VW insertion on Monday.

There were a few football surprises Sunday.....the San Diego Chargers came from 17 points down versus the Atlanta Falcons in Atlanta to win by 3 in overtime....I did not see that coming......the Oakland Raiders won on the road again over the Jacksonville Jaguars 33-16, The NY Jets beat the Baltimore Ravens 24-16, the hapless Detroit Lions defeated the Washington Redskins on a last minute field goal in Washington D.C.   The nightcap between the Seattle Seahawks and Arizona Cardinals was a defensive game from beginning to end which saw the game tied 3-3 at the end of regulation.....each team scored a field goal in overtime to make it 6-6 and that is how it ended......both teams missed 'chipshot' field goal attempts in the waning moments of overtime.

TLE worked about 5.5 hours Sunday, so I had the place all to myself, although I was 'on call' I had no calls so other than the time I spent organizing the trailer, I was able to relax in my recliner watching the NFL and taking short naps.

My thoughts have begun to turn frequently to changing our view, and I am looking so forward to being back in SoCal for a month to see, hug and love our children, and grand children......to take some long bike rides on the SART (Santa Ana River Trail) and the PET (Pacific Electric Trail).....to just wake up every day for the next 6 months knowing I don't have to go to work.   I've got 4, or 5 days of work left......am I ready for a change after 6 months?  You bet!  Will I miss TVC and SLT.....you bet!  The next 6 months of travel holds many unknowns, and it has been a while since we have been on the east coast, but we are excited to see what our travels have in store for us.....we are excited to see what opportunities 'Miss Serendipity' will toss into our path along the way.  The great thing is we can, as I often remark, change our view without going though escrow!

Thanks for stopping by!
Posted by Whatsnewell at 9:49 AM