Thursday I felt a sort of vague ennui as we began our last work day at TVC around 9 am.  Our intent for this day, and what actually happened were identical.....put the finishing touches on the Group Area fence, which included putting a diagonal brace on the gate at the Group Restroom outdoor sinks, and to finish two additional 'gates' along the length of the fence.  Fabricating the diagonal brace required a beveled cut at each end of the brace.  I had no pencil with which to mark the brace accordingly so I used a hacksaw blade to score the wood with the proper angle at each end whilst TLE held it in place......now, normally, this is method would be unlikely to result in a good outcome on the first try, but I have this optimistic side that surfaces occasionally.  We took the brace down to the maintenance yard to use the 'chop saw' to make the mitered cuts.......figuring out how to operate this particular chop saw is less than intuitive, but eventually with the help of a co-worker we figured it out and with his assistance (holding the brace in place while I operated the chop saw) we made the cuts.  They looked good, but the proof is in the pudding, right? 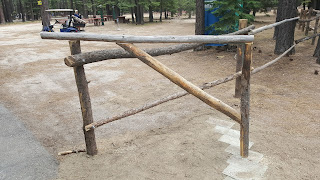 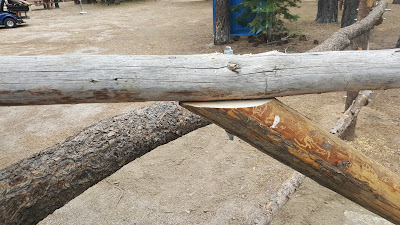 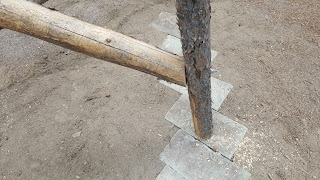 ......you can judge for yourself......they came out almost perfect......on the first try!  I am still kind of stunned even as I sit here Friday morning recounting it.  TLE and I quickly drilled holes and using threaded rod, fastened it to the gate.

Now it was on to the two gates/access points further down the fence line.  We want to be able to provide ingress and egress points along the fence in case one group rents both sides of the Group Area in the future.  The temporary gates are not readily apparent, but with a little elbow grease can be opened on a temporary basis. 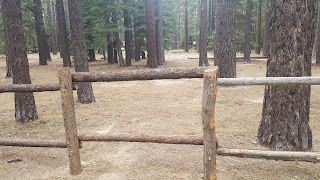 Instead of using threaded rod to hold the removable poles, we used rebar and just pounded the rebar into the pre-drilled holes.  All that is needed to remove them is a mallet and, as I said earlier, a little elbow grease. 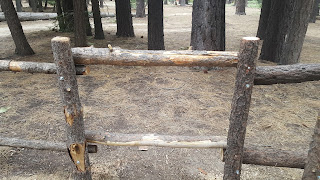 Now, in the middle of all this fun we had a scheduled phone interview for a job in a very famous National Park....it was our second in two days.....the first was Wednesday to work in a campground at another well known National Park.  Both interviews went very well, and we now find ourselves with two very good choices, and, therefore, a seemingly difficult decision.  Personally, I am thankful we have choices.  We will take a day, or so to make our final decision, but the scales are slightly tipped in favor of one over the other.

A few of our fellow workampers invited us to a combination birthday dinner for Jan, and a goodbye dinner for us at Coldwater Brewery and Grill (Yelp = 4 stars on 473 reviews).  We met there around 6 pm, and had a wonderful dinner, which ended with us sitting outside by their (Coldwater's)  gas fire ring talking until close to 9 pm....... 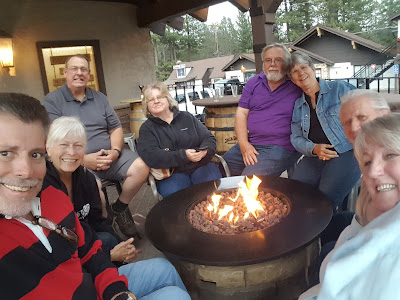 We were back home around 9 pm basking in the glow of a very nice evening spent with wonderful, caring folks.....thank you guys!  It meant a lot!

When you need to buy something from Amazon, think of us.......we will appreciate every purchase you make using our Amazon Affiliate link, and  remember, using our link will not add one penny to your purchase, plus we will receive a small commission.
Posted by Whatsnewell at 7:28 AM