I had been looking forward to Monday since we arrived here at YRVP (Yellowstone RV Park) last Thursday.  Monday would be the first day we have not been traveling, orienting and working since June 10th when we departed TVC.  We had not had any time to really set up our camp for the next 3.5 months and we were especially eager to get our 'grass' out of the trailer...... 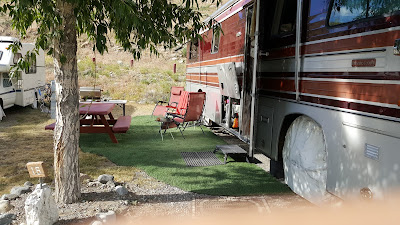 ......normally we would have left this artificial turf at TVC awaiting our return the following season, but returning ending up not being in the cards so to speak, and we were determined not to abandon it.  We were able to fold it up in such a manner that would could drag it into the trailer and then drive the VW into the trailer on top of it.  I was skeptical that it would work, but as usual TLE, whose idea it was, has very good spacial talents.  It did work, and Monday was the day to drag it back out and begin enjoying it again.  There is something about this artificial turf beneath my feet which makes me feel I'm at home again..... 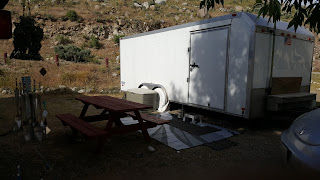 Once our site was beginning to look more like home than a temporary location we decided to get in the VW and take a tour of downtown Gardiner and the surrounding area..... 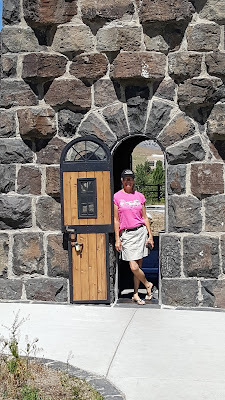 ....our first stop was the Roosevelt Arch, which I wrote briefly about yesterday.....we had yet to take our own personal pictures of the arch....... 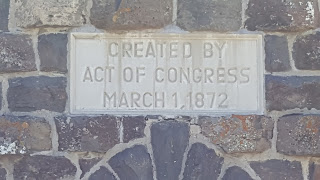 ......of course, Yellowstone National Park was the first such park created by Congress on March 1, 1872 at the urging of President Grant.  The arch, marking the northern entrance of the park was completed in 1903, and became known as the Roosevelt Arch when then President Teddy Roosevelt dedicated it while vacationing in Yellowstone. 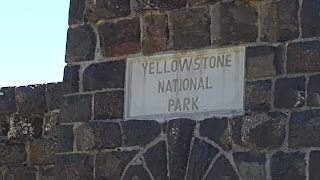 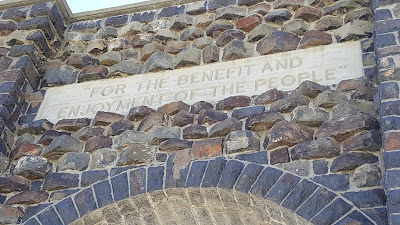 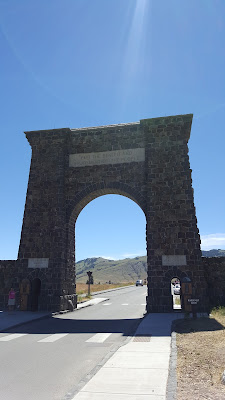 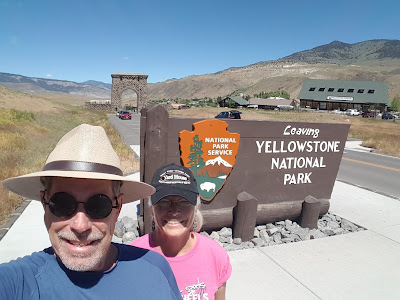 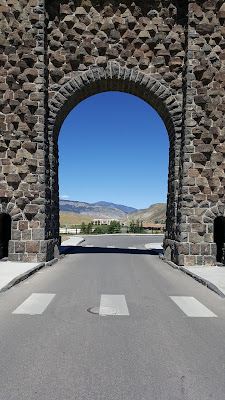 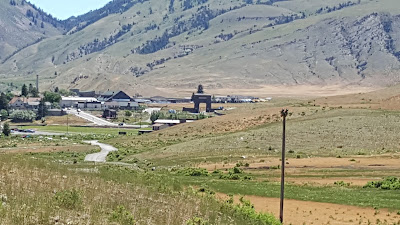 I took this shot on the original road one would have taken into YNP back in the late 1800's.....you can see the Roosevelt Arch in the background. 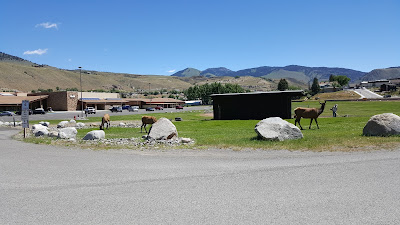 We snapped this picture of three female Elk, which can be seen everywhere around Gardiner and Mammoth Hot Springs grazing.

On our way back to YRVP we stopped off at the Gardiner Market to check out their inventory, and to buy a few things.  As it turns out they have many of what I would call staples we use on a regular basis including Snap-E-Tom and TLE's favorite potato vodka.  They have a very adequate meat counter, and many of the other staples we prefer. 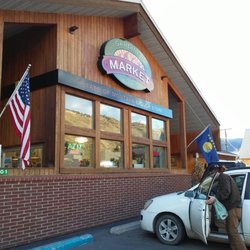 We were back home by 1 pm.....we had decided that we would not do too much exploring Monday preferring to set up our camp, and just relax on our first day off from traveling, orienting and working in over 8 days.  I spent the rest of the afternoon continuing to set up the trailer by getting my tools out, the bicycles out and putting some of our chairs out.  Finally about 4 pm I sat down outside in one of the anti gravity chairs and just relaxed......it was actually quite a warm day getting close to 85º F, so sitting outside was preferable to being inside.

Around 5:30 I turned on the Sea-B-Que in anticipation of grilling a filet mignon for our dining pleasure.....TLE had me roast two ears of corn, and she also added some asparagus with hollandaise sauce.....it all turned out wondefully.... 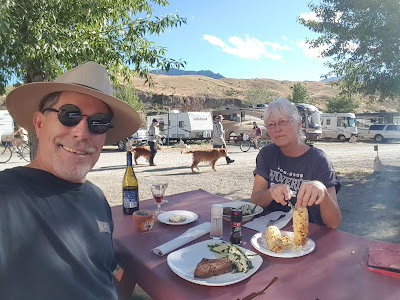 ....we sat outside enjoying the early evening air until the sun managed to move around one of our shade trees chasing us back inside for the evening.  Monday was a perfect day off, and we are now basically 'setup'. Tuesday will see us doing some exploring in YNP proper....stay tuned!

When you need to buy something from Amazon, think of us.......we will appreciate every purchase you make using our Amazon Affiliate link, and  remember, using our link will not add one penny to your purchase, plus we will receive a small commission.
Posted by Whatsnewell at 7:19 AM