When we woke up Tuesday it was already 70º.  It had only gotten down to 78º in our bedroom during the night, so we were anticipating a warm day, and that is what we received.  Tony and his wife were out trimming bushes, and doing other yard work type stuff very early, but by 10 am they were inside running their A/C, and so were we.  It wasn't that it was that hot, but more the high humidity in the air that made it so uncomfortable.

Before we were chased inside I worked on fixing a failed brake light on the VW.  Charles and Bobbie were following us in their truck over to Thurston's on Sunday, and when we arrived Charles had mentioned our left brake light was not working.  We've owned the VW for several years now, and I've never had to replace any of the lights, so I had no idea how to get to the brake/turn/running light assembly.  I first pulled out the stuff we keep in the hatch area, and then began to examine the area near where I would assume you should be able to service that left rear lens.  I finally noticed a round disk about 4" in diameter that looked like it could be removed..... 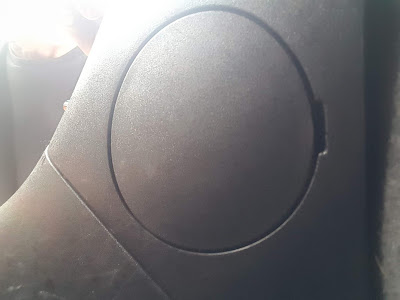 ......I then removed that disk thinking I would be able to see the rear of the light assembly and remove the defective bulb, only I could see only wires, and sheet metal...... 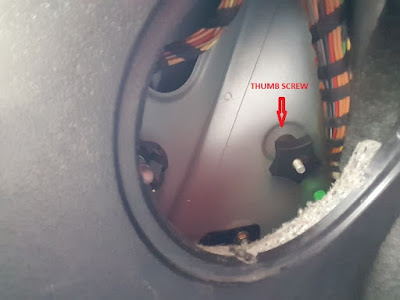 .....then I saw this 'thumb' screw.  It seemed that if I unscrewed that 'thumb' screw the lens would be loosened and I could then pull it away from the car thereby granting access to the bulb.  To be sure I went on YouTube to see if there was a video showing how to replace the brake light bulb......

.......and found one immediately!  I watched it a couple of times, and it confirmed my suspicion.....that 'thumb' screw was the key.  Don't you just love YouTube for stuff like this?!  Over the years we have owned our Beetle I have been impressed at how easy it is to fix stuff like this.  You might recall a couple of years ago our fuel pump failed while we were in Mexican Hat, UT.  After we were towed back to our campsite I went online and ordered a new fuel pump to install when we got back to 'civilization'.  My friend, Tom, McCloud, contacted me with a YouTube video link showing how easy it was to access the fuel pump, and replace it.  Most everything on this car has been just as easy to fix thanks to YouTube!

Within minutes I removed the defective bulb, determined the replacement part number, and then drove over to the local Napa Auto Parts store about 1/2 mile away and got two new dual filament brake like bulbs, and replaced the defective one just before 10 am.  Okay, it's too warm.....time to cool down in the A/C!

The rest of the day was spent reading, and staying cool.  I think the temperature ultimately reached 80º F, but by 3 pm it began to cool quite quickly.  We did make a run to Food Mart to pick up a few things around 1 pm, but that was the extent of our day.  We had planned to meet up with Charles and Bobbie for dinner, but TLE was dealing with a sinus headache most of the day, so we decided to stay home for the evening.


When you shop Amazon, please use our link (below) to access their website.......we will appreciate every purchase you make using our Amazon Affiliate link, and  remember, using our link will not add one penny to your purchase, plus we will receive a small commission which helps defer the costs of producing this blog each day.
Posted by Whatsnewell at 5:01 AM