Since I used yesterday's blog post to give the interior pictorial tour of our coach  I haven't written about Friday yet, so the first part of this blog will cover Friday's happenings, then we'll get to Saturday.

Friday we were expecting to hear from our dear friends Charles and Bobbie sometime in the afternoon as they would be arriving for about a week of touring Acadia National Park.  I have known Charles since junior high school, so we go way back.  They live in Arizona through the winter and early spring, and travel in their Landmark 5th wheel during the summer into early fall each year to escape the Arizona heat.  The past three summers we have met up with them wherever we happened to be working.  In 2016 it was South Lake Tahoe, in 2017 it was Yellowstone, and this year, of course, here in Acadia National Park.  At any rate, since we were not sure when we would hear from them we hung around home most of the day.

I spent time puttering in the trailer, and fixing my most favorite coffee cup ever.  I have had this coffee cup since 2005, or 2006.  It was given to me by one of my sons-in-law after he and my daughter had returned from a trip to Alaska to visit his parents.  This is the best thermal coffee cup I have ever had.  It keeps my precious coffee HOT for about an hour.  It's only flaw over the years has been the propensity of the handle to become detached from the coffee cup.  I have reglued this handle to 'old green' about 5 times over the years using two part epoxy.  The most recent time was over 3 years ago, and that repair has lasted the longest of all the repairs I have done.  This coffee cup is like a guy's favorite t-shirt that he wears until it virtually turns to dust.  I really love this cup, and have so many good memories attached to it! 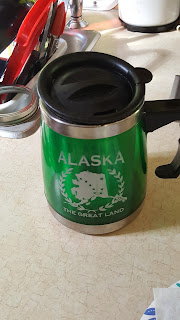 When the handle came off a few years ago I actually went online to see if I could find one just like it, and actually found one on eBay, but I decided to stick with 'old green' and fixed the handle.  Well, it came off the other morning while I was holding it by the handle.  The cup fell into my lap, and spilled a little coffee on me, but thankfully I always drink my coffee with the snug fitting lid attached.  In a weak moment I went online to Amazon to just look for another double wall, insulated thermal coffee cup and ordered it...... 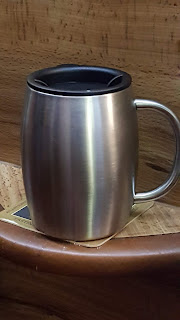 .......it is just a 'plain Jane' stainless steel, double wall thermal cup, but it has a matching stainless steel handle that appears to be pretty firmly attached.  It was a moment of extreme weakness, but I felt it was time for something new.  After I had ordered it I felt bad, and went out to the trailer to clean off the old epoxy and reglue the handle on to 'old green' one more time.  It actually turned out quite well...... 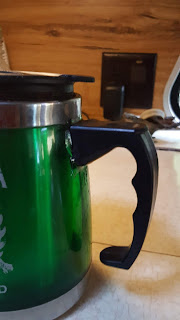 .....and now I am in a quandary....do I continue to use 'old green', and wait for the inevitable failure of the epoxy sometime in the distant future, or do I embrace the new cup and get on with my life?  On the one hand I love the open ended handle on 'old green' which allows me to grip it firmly..... 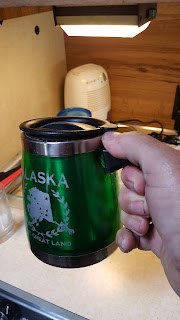 .....since it has a rubber coated grip I never feel like it will slip out of my hand, unless it just falls off once again.  I'm able to grip the new cup in similar fashion, but the handle is not as manly as the old one..... 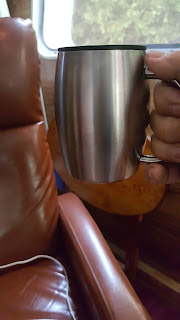 .....I can still get three of my fingers inside the handle, and this new cup does keep my coffee hot just as long as the old one.  On the other hand this new cup has no personality....no character, no history, and no memories.....what do I do?  Such are the dilemmas of the retired man.......😏

We heard from Charles and Bobbie about 4 pm, and agreed to meet them at their RV park in Trenton about 5:30 pm.  Trenton is about 1/2 way to Ellsworth and the drive takes about 20 minutes so we left home at 5 pm to make the drive over to the 'Narrows Too' RV Park.  We sat talking, and catching up for about 2 hours before we bid them adieu after making plans to meet up again on Saturday for lunch.

We were back home by 8 pm, and settled in for the evening.  We knew the overnight low was going to be in the low 50's, and it, indeed, got down to 52º outside.  The temp in the bedroom got down to 55º F with ALL the windows open.....how delightful!  I actually turned on my electric blanket about 5 am for the first time since early June!

Saturday we awoke to English Premier Soccer.....three games in a row!  Saturday also kicked off the NCAA college football season with games all day long and into the late evening.  Additionally it was the second round of the current PGA tour event being held near Boston, MA....what more could a guy ask for with a cornucopia of sporting events from which to choose.

Charles and Bobbie had come into Trenton a day earlier than they had planned, and the site they had originally reserved (right on the ocean) was not available until Saturday, so they had to set up temporarily in another site.  As a result they had to move to their reserved site on Saturday, but couldn't until the customer occupying that site departed.  We know how that can work, right?  Well, they didn't depart until early afternoon, meaning Charles could not move their 5th wheel until then.  We finally heard from them about 3 pm via text message.  He had tried to call me, but my phone did not 'ring'.  When I got the text message I called him, but he didn't hear his phone ring either, so we were trading voice mails, and text messages.  Finally, via text message, we agreed to meet at Finn's Irish Pub in Ellsworth for lunch.  Bobbie was not feeling well, so Charles met us there and we had a lovely lunch.  We have been to Finn's before, as you might recall, and were looking forward to a return engagement.  Charles arrived a few minutes before we and secured a table.  The last time we had two of their appetizers, so we decided to order an actual meal this time.  I ordered their  'Finn's Burger' and was not disappointed in the 1/2 lb. burger.   TLE ordered their Ruben and was equally impressed.  I had a couple of pints of 'Allagash Black'.  We sat eating and talking for close to two hours before we bid Charles adieu and headed for the barn.  We'll get together with he and Bobbie on Sunday for a driving tour of Bar Harbor, then up to Cadillac Mountain and finish the afternoon at Thurston's over in Bernard.

I spent the rest of the afternoon watching portions of several NCAA football games, as well as the tail end of the 2nd round of the 'Dell Technology' golf tournament.  In the evening we continued watching 'Pacific' beginning with episode 4 (10 episodes in all).  We finished the night getting through episode 6.  This series is very intense and attempts to accurately portray the utter brutality of the war in the Pacific, which involved taking back one island at a time, bunker by bunker from the Japanese, who would rather die than surrender.  It was brutal to watch....I cannot even imagine what it would be like to fight that kind of war under those extreme conditions.

We were both in bed a little after 11 pm looking forward to Sunday's events!  Thanks for stopping by!

When you shop Amazon, please use our link (below) to access their website.......we will appreciate every purchase you make using our Amazon Affiliate link, and  remember, using our link will not add one penny to your purchase, plus we will receive a small commission which helps defer the costs of producing this blog each day.
Posted by Whatsnewell at 5:42 AM