Our first full day in Burlington we decided to take a walk.  The cool thing about this Elks Lodge is that right in the back of the property is a foot path that takes you down to the bicycle path, and ultimately down to Lake Champlain itself...... 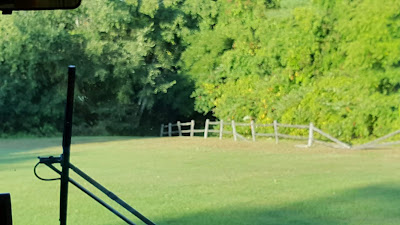 The foot path begins at the end of that fence line 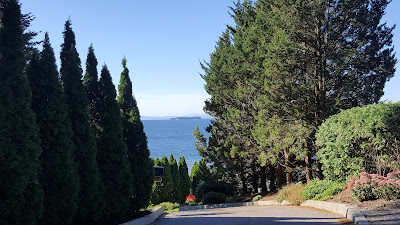 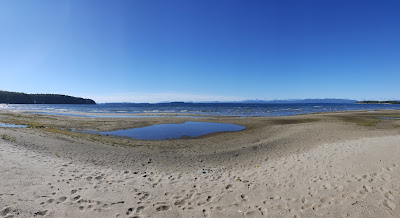 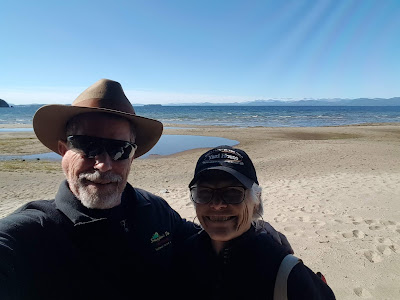 ......the footpath is about 1/8th of a mile long.  The actual bike path (Island Line Rail Trail) travels north and south along the eastern (Vermont) shoreline from the point we entered it. The total length is just over 13 miles.  We plan to ride this very nice bike path on Monday.  After making the climb back up to the bike path from the beach we continued north about 1/2 mile before turning back inland to make  stop at the local ACE Hardware Store, and also the local Hannaford's Supermarket.  Why ACE Hardware?  Well, it appears the thermocoupler on our water heater is going bad, so why not buy one now and have it ready for when it completely kicks the bucket?  This current thermocoupler was replaced by moi about 5 1/2 years ago when we were visiting Gettysburg. Fortunately, we were parked overnight in a Walmart parking lot, which was right next door to Home Depot and I was able to walk in, buy one, and replace it in about 15 minutes.  That was lucky.....we do not want to be without hot water, do we?

After picking up the thermocoupler (I actually bought two so I will have a spare after I replace the current one) we headed over to Hannaford's to buy a few things before finishing our walk back to the Elks Lodge.  In all we covered almost 3 miles.  I would have liked to have taken a long bike ride Sunday, but TLE and I both agreed we wanted to be home by 2:00 pm to watch the 4th round of the Tour Championship.  Would Tiger finally complete his comeback and win one more time?

Around noon we got in the VW and headed into Burlington to Burlington Beer Company for lunch.  TLE is the resident micro brewery researcher.  She always finds the best option wherever we may be, and once again she delivered in spades.  This brewery is kind of off the beaten path, and the warehouse ambiance is somewhat lacking, but man oh man, do they deliver big time with beer and food.  It reminds me a lot of a micro brewery in Rancho Cucamonga, CA called 'Last Name Brewing Company'.....very similar ambiance.

As we perused the draft beer list prior to ordering our food TLE and I both focused immediately upon the first offering called 'Barista' (Finca San Jose), a single source coffee porter and immediately ordered two full pours of that 7.3% ABV brew.  For our entrees I ordered their Bacon/Avocado Panini Melt sandwich, and TLE their Chicken Molé Tacos (2).  Our brews came first, and before I even picked up the glass I could smell the coffee aroma.  The taste and finish on this porter are spectacular.  It is like having a cup of coffee with alcohol in it.....the best of all worlds, right?

Then our food orders arrived.....I often tell people that the food at a micro brewery better meet, or exceed the quality of the beer, and in this case I can honestly tell you I am not sure which I like better....the beer, or the food.  My panini melt was off the charts delicious, and paired beautifully with my Barista draft.  TLE, not to be left out of the discussion, swears the tacos were some of the best she has EVER had....what, what?  This is New England.....how is that possible?  If she says it, I'll have to believe it..... 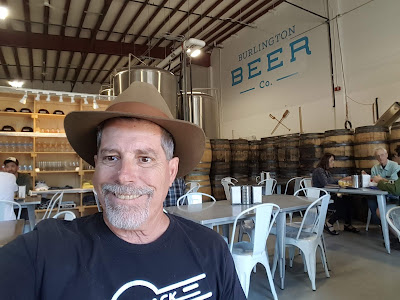 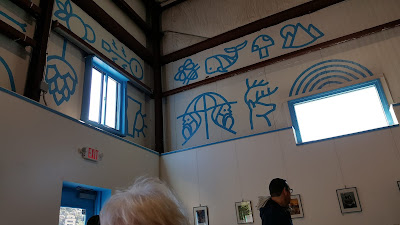 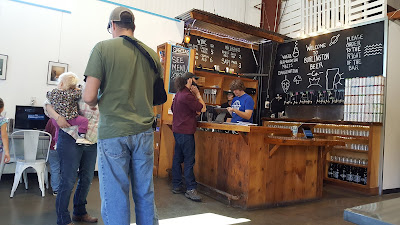 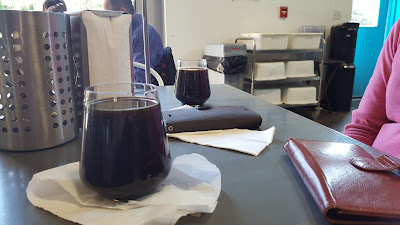 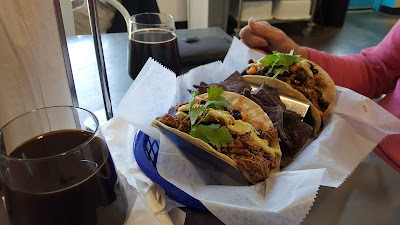 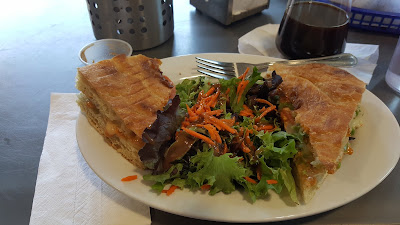 .....by now you know TLE and I pretty well, so you can only imagine that we were 'ooooing and awwwwing' quite a bit as we sipped our brews, and consumed our entrees.

We were back on our way home by 1:30 pm to watch the 4th and final round of the Tour Championship.  Beginning the day Tiger was 12 under par with a 3 stroke lead.  He immediately birdied the first hole and went 4 strokes up.  Then both Rory McIlroy and Justin Rose bogied giving him a 5 stroke lead, which he maintained for much of the day until the last few holes when he bogeyed two holes in a row and was only up 2 strokes going into the 18th hole.  Ultimately he parred the 18th hole to win by two strokes, and to complete his comeback from multiple serious injuries.  By winning he won his 80th tournament making him only the second professional golfer to win 80, or more tournaments.....the only person ahead of him now is Sam Snead who won 83. 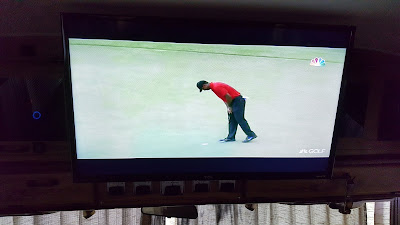 Tiger pars the 18th and 72nd hole to win by two 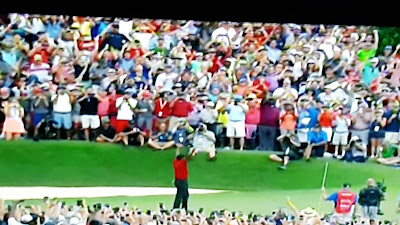 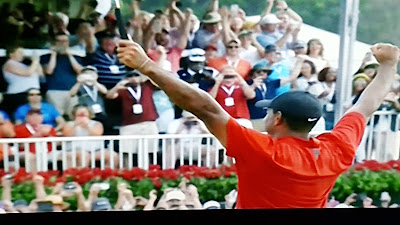 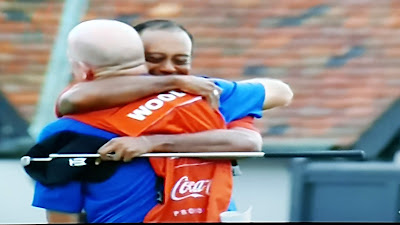 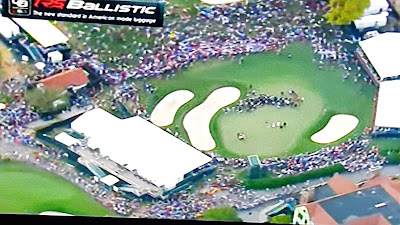 Watch this video to see the crowd following Tiger to the 18th green! 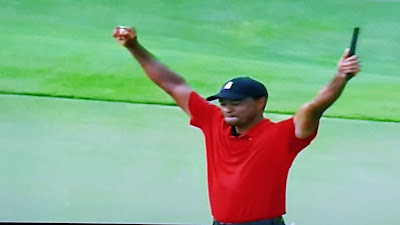 ......as you know I have been watching every tournament Tiger has entered for the last 6 months hoping he would win.  He came close a few times, but could not seem to close the deal. I had pretty much given up until he finished tied for first in the first round of the current tournament (Tour Championship).....then he finished the second round tied for first....then he finished in sole possession of first after the 3rd round with a 3 stroke lead, and for the 24th consecutive time when leading by 3, or more strokes after 3 rounds he won.....he closed the deal!  Amazing....that is all I have to say as I sit here today enjoying in my mind his 80th tour win......an amazing storybook win!


When you shop Amazon, please use our link (below) to access their website.......we will appreciate every purchase you make using our Amazon Affiliate link, and  remember, using our link will not add one penny to your purchase, plus we will receive a small commission which helps defray our travel expenses to a small degree.
Posted by Whatsnewell at 5:47 AM