The forecast for Tuesday was for rain most of the day, and that is precisely what we got.  It began raining about 9 am, and continued until after 5 pm.  We knew that coming into Burlington, which is why we chose to stay here until Thursday to give the forecast rain on Tuesday and Wednesday a chance to pass through before we began moving again...... 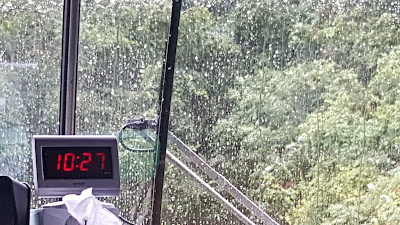 ......since we had pretty much seen everything we wished to see on Sunday and Monday we opted to remain indoors during the rain.  As a result there is not much about which to write this morning.

I spent the day reading, napping and at some point I removed the mini blinds from the window on my side of the bed to take them out to the trailer where I will restring them on Wednesday.  I'm not sure if I have mentioned this previously, but every window in our coach (except the windshield, driver's and passenger's windows) have Levelor mini blinds installed in addition to the curtains which do cover every single window.  I've had to restring two others previously.....the one covering the kitchen window, and the one covering the passenger side salon window.  While each of those was relatively easy to do as they are only about 3' wide, the ones in the bedroom are about 6' long and that will involve a lot more string, and add an additional level of difficulty, but I am sure I am up to the task..... 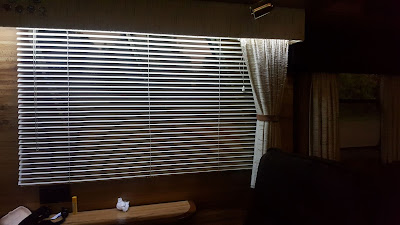 .....that these mini blinds have endured 36 years of use with relatively few issues is a testament to the quality of workmanship involved in their production.  Each day we raise all the mini blinds in the coach to maximize light inside.  They are all lowered again each night, and the curtains closed.  I able only able to speak for the 10 years we have owned the coach, and the almost 7 years we have been fulltimers, but that is a lot of raising and lowering, right?

There were a couple of new, recorded network shows we wanted to watch from Monday night ('Manifest' and 'Magnum, P.I.').  So we watched those in the afternoon.  The premise of 'Manifest' is that a passenger jet airliner takes off in 2013, is presumed to have crashed, and then lands at its original destination airport in 2018, some 5.5 years after it took off.  The passengers were not one day older than when they took off in 2013.  The second, 'Magnum, P.I., is a remake of the very popular TV drama running from 1980-88, starring Tom Selleck.  I generally do not like remakes of TV shows, or even movies, but TLE wanted to see it and make up her mind.  The jury is still way, way out for me, but I did like 'Manifest'.

TLE went and did a BIG shopping to really stock up for the next 10 days.  I remained at home, which is rare for me.  Back in our workaday lives I NEVER went to the supermarket with TLE, but since we began fulltiming I have joined her in her shopping forays more often than not, and have enjoyed getting to understand how a supermarket is laid out, and can now actually finds things on my own now!  Sometimes she will even send my, by myself, to the supermarket.....amazing!  Going with her is also a guaranty that I will get the things I want.  She is pretty good about remembering the things I like, and she will ask me if there is anything I need before she goes shopping, but often I won't remember those things until I am in the store, and we are walking by those particular items.  Does that make sense?

That was the extent of our day.  It looks like we will be getting more rain today (Wednesday) around noon time so we'll need to get out and do a few things before then.

Thanks for stopping by!
Posted by Whatsnewell at 4:11 AM